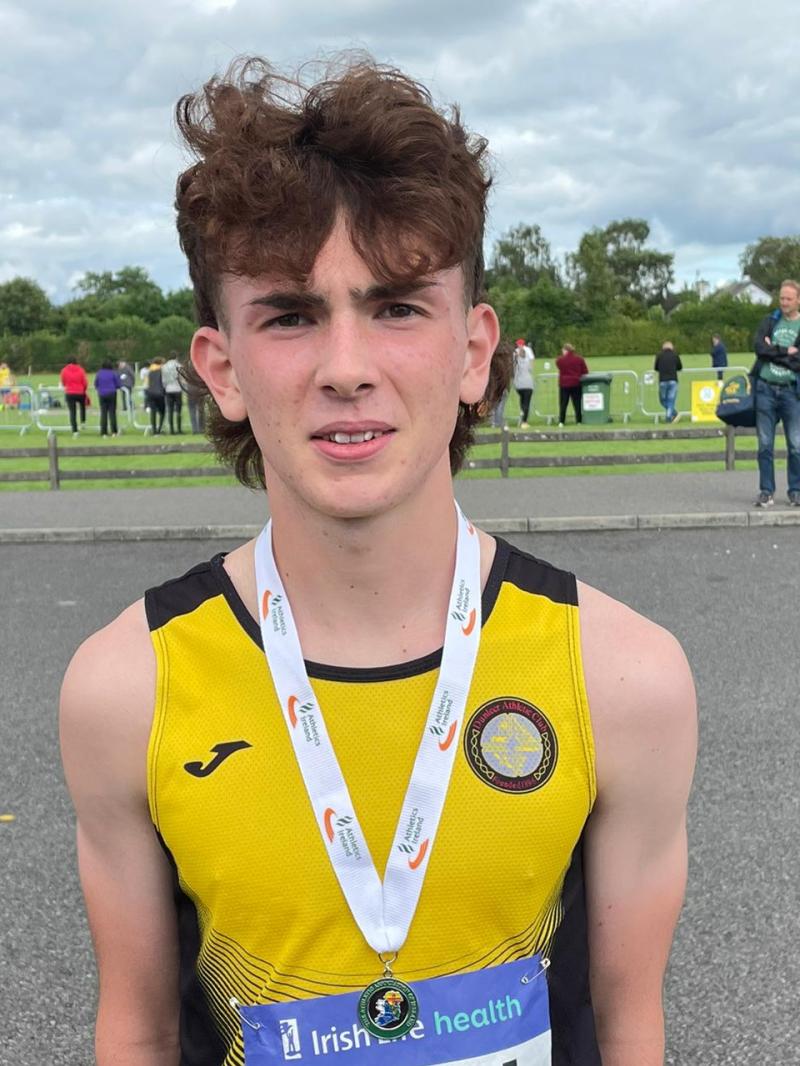 Dunleer AC athletes are delighted to be taking their places at the National juvenile Championships this month following Leinster qualification in a very difficult year for global sports.

Again, the officials and committees at Louth, Leinster and National level must be commended for organising these prestigious events in Covid times. It is due to these hard working voluntary individuals that the Championships are going ahead.

Last weekend Dunleer AC had five athletes competing, Tadgh Reilly in U17 Shot Putt, Conn Bonnar in the U16 100m, while both Sean Connaughton Maebh Eakin took part in the 3000 metres.

Seán Connaughton took 2nd place behind European u20 3000 metre Champion Nicholas Griggs in a fantastic race which featured the under 18s and 19s running together.

Sean ran a very clever race, with a steady first 1500m and then winding it up with 1500m to go. His time of 8.47.16 is a massive personal best and with a 1500m to run next week this Leinster Champion and National silver medalist will be raring to go again

Elsewhere there was a great time of 2.18.96 for Erinn in the 800M event on Saturday in her first race of the 2021 National Championships. There were tough conditions in Tullamore with very heavy downpours of rain but Erinn was extremely composed and only faltered in the final 50 metres, coming away with a fine 4th.

On Sunday there was a new personsl best of 10.27.33 and 4th for Maebh Eakin in the National U17 3000 metres. This was a brilliant run for Maebh in her first Nationals on the track.

Conn Bonnar can be very pleased also with his 100m National 6th place in his heat on Sunday. These were his first Nationals and Conn still has the hurdles to come next week.

On Saturday 14th August in the next round of the National Championships it will be Erinn Leavy in the U16 1500m, Sean Connaughton under 18 1500m and Conn Bonnar in the U16 110 m hurdles who will wear the Dunleer singlet . On Saturday 21st August Cliodhna Reilly will be on the startline for the U12 600m, with Cormac Greene also featuring in 600m event.

On the previous Wednesday there were two brilliant performances by Dunleer AC athletes at the Mary Peter's track, with Finn Reilly running sub 2 minutes for 800m and sub 11 for Anthony Dillon in the 100m.

Off the track three Dunleer AC athletes finished in the top 20 at the DDAC Capital Masters 5k this morning! Sub 17 with a 16.48 6th place for Noel Williams and sub 18 and 17.59 for Karen Costello in 14th overall and first woman! 18.23 for Paddy Mahoney to finish 19th.