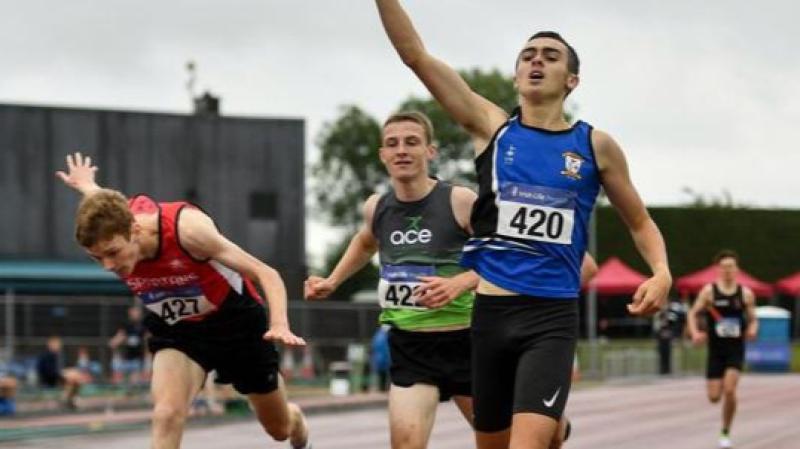 The National Track & Field Championships commenced in Tullamore Stadium last weekend with the standard of Athletics being exceptionally high. The St Peters AC club enjoyed a day that will Live long in the memory of all its members.

The club had four athletes in action on day one having qualified from the recent Leinster Championships. Cian Gorham who has really improved year on year had his finest hour when he won his first national title.

Cian went into the National 800M final quietly confident of being in the business end of the race going by his last few results and on the back of his recent performances at club training.

The race went really well for the young runner with a lot of jostling for positions during the first lap. Cian took the lead at the bell and although he had his opponents breathing down his neck he managed to pull away at the closing stages and claim the title of national U17 800M Champion in a time of 1.56.20.

Rory McLoughlin who has also enjoyed a great season having already won both the Louth and Leinster U18 800M Championships. He gave the National 800M an almighty challenge and was extremely unlucky not to add a national medal to his already impressive collection.

Rory put himself into a great position going into the second lap and took the lead on the back straight, unfortunately for Rory Lady Luck wasn’t on his side and he had to Settle for fourth place but can take great satisfaction from such a brave performance and really giving his all.

Sean Reilly was in action in the Boys U16 800M, unfortunately for Sean he picked up a mussel strain during the week and although was passed fit to run he just wasn’t able to repeat his recent performances.

Niamh Brady has been an ever present at National track & Field Championships since she started competing in athletics and although the U17 800M National final didn’t quite go to plan, this terrific young athlete will bounce back and is already relishing the upcoming Cross Country season.

This weekend the club will have another athlete compete at National Championship when Dearbhla Allen will be on the startline in the U15 1500M final.

Going on Staycation? Read this advice from gardaí to protect your home and property