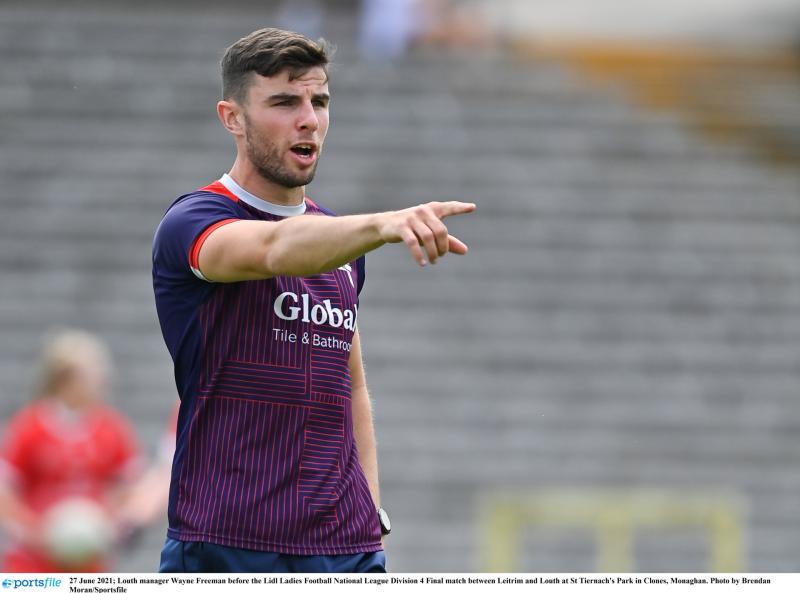 There is an exiting buzz engrossing Ladies football across the county right now, the U16’s recently won a Leinster C title, the Minors and U14’s were successful in their opening rounds of the championship and on Sunday the Senior play in an Intermediate Quarter Final.

They have already achieved great highs in gaining promotion to Division Three for 2022 and their manager Wayne Freeman has spotted a noticeable upbeat attitude in the past few weeks as they prepared for the knockout fixture with Laois in Kinnegad (Throw in 2PM).

“It been brilliant, training the last few weeks has felt like the best we’ve had in the last two years, there is a real skip in everyone’s step and the attitude and energy around the camp has been fantastic” recalled Freeman.

The Kildare native knows this will be one of his toughest tests to date, taking on the reigning Division Three champions, a side which have bagged 19 goals across seven games in both the league and championship.

Yet it is not their talents he was dwelling on when speaking to the Democrat earlier this week, instead focusing on their own threat up top.

The Wee County have notched 4-9, 3-10, 3-16, 4-14, and 3-6 in the National League, the vast majority of which came from open play while also putting up 4-11 in their most recent championship outing versus Offaly two weeks ago.

That is reason enough to have faith in his troops and he is confident the likes of Kate Flood, Lauren Boyle, Laura Collins and Co will do themselves justice on Sunday and show their worth against what is bound to be a well a drilled Laois defence.

“Their accuracy in front of goal and their movement in training has been exceptional and I’m excited to see them go up against a Division Three winning defensive six and see how we got on. I have full faith in them that we can get big scores against Laois.”

“We are good enough to go and compete against them, our goal threat is there for everyone to see, we can get them through pretty much anyone in the team, so it is not a case of doubling up on one player which is often the case with Division Four teams.”

“We have good starting forwards, in various games any one of those will be putting up big scores so it is going to be interesting. We will try and play our own game, keep the pace in the game, keep the ball alive as it is what suits us and we are very excited for the occasion.”

Earlier in year, during the National League sinbins were a major problem for Louth. Eilis Hand was put in the bin against Offaly, Kate Flood a week earlier against Derry while against Leitrim Sarah Quinn was sent to the side lines.

This is a part of their game that Freeman has worked really hard on to eradicate, knowing all too well that a 10-minute period in the bin could be the difference between winning and losing on Sunday.

Tackling and more pressure by forwards on their markers in training has seen cards and fouls in general drop so far in the championship and he doesn’t see their discipline as being a problem against Laois.

“We’ve worked really hard on it, we look back on some of those calls and we were literally just very unlucky. Referees were sort of looking for stuff as well because they are being told you need to clamp down on certain sections of the game, so it has been difficult for them too.”

“We just learnt to see early in the game what they are looking for, what they are clamping down on, then try and work with them rather than go against them. That comes from working hard in training, forwards pushing the defenders around a bit more trying to get them to react.”

“We can’t be leaving in lazy challenges, offering the ref an opportunity to give a free. Especially with Mo Nerney playing as from 30 meters out she is going to score. We have to be disciplined, but we’ve worked hard on it and I don’t see it being an issue.”

Louth know they are underdogs, but Freeman was adamant they still had to approach the game with the right attitude if they want to be successful.

While some say they have nothing to lose, he begs to differ with a place in the All Ireland Semi-final enough of a motivator to get his troops primed for the challenge and know there is something huge on the line.

He is hopeful they will learn from the mistakes made last year when they approached Westmeath with the wrong mindset and never recovered. On Sunday they won’t let the prospects of facing one of the favourites for the title stop them playing the game that suits them best. All-out attack.

“We have to believe in ourselves on Sunday, go into Kinnegad with the right attitude, with a winning attitude and go out to try and win the game rather than thinking about not losing the game” he exclaimed.

“Out of all the games in the last two years that I’ve been involved with Louth, the Westmeath game is the one we’ve learnt the most from in last year’s championship when we felt we could’ve made a challenge against them but ended up with a defensive display for the whole game.”

“Probably just being in Division Four playing a Division One team that mindset slipped in automatically but that is what we are trying not to do on Sunday, where we’ll be more positive and try and go win the game rather than lose the game or be hanging on for dear life.”

The game will be streamed live at https://page.inplayer.com/peilnamban/ , with the tie in Kinnegad throwing in at 2PM.  You can also watch any of the other five LGFA games fixed for this weekend through the same link.