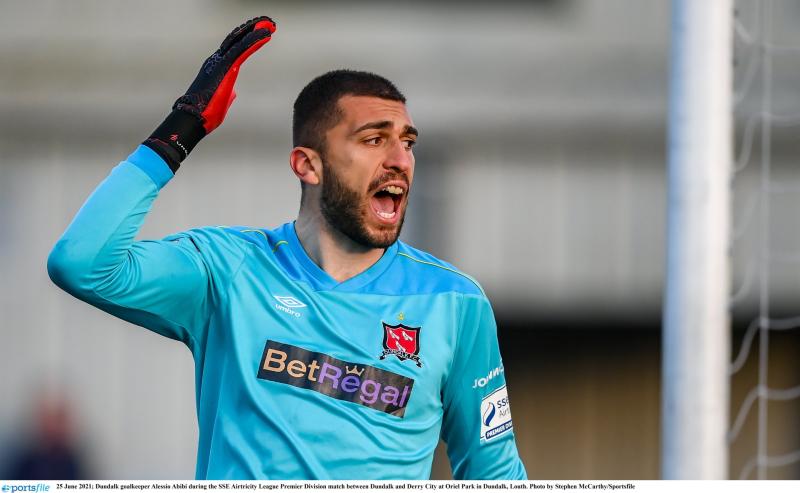 Dundalk FC goalkeeper Alessio Abibi has responded to the criticism he endured from many throughout the early part of what is his debut season at Oriel Park.

The 24-year-old Albanian joined The Lilywhites from Italian football at the start of the year, but came under much scrutiny following a catalogue of errors between the sticks.

However, since head coach Vinny Perth returned to the club in June, Abibi has looked considerably more assured and has nailed down the number one jersey as his own.

“I played a lot of games even before (Perth’s appointment),” Abibi said to reporters.

“I think I only didn’t play four games all the season, so I was playing constantly even before Vinny came. When you work with somebody that shows you confidence, gives you the calmness to play, the proper instructions, how to play and what to do in every situation, I think it’s easier for everyone.

“You can still see the best goalkeepers in the world doing mistakes for many reasons because they can have a bad day, that’s not normal. It doesn’t mean anything, it’s part of the game. People just have to look to improve what they do bad and just keep going.

“I think I was judged bad before, but to be fair, I don’t mind what people say. I go to Oriel always with the same mind and confidence in myself. If they say that I am brilliant, I’m happy, but it doesn’t really affect me.”

Abibi has played for Albania at U21 level, but has yet to receive a senior cap for which he faces competition from the likes of Etrit Berisha (Torino) and Thomas Strakosha (Lazio).

However, the Dundalk netminder has confirmed that the Albanian FA has been in touch with him about the possibility of receiving a call-up to the national team in the future.

“The international situation is not that easy,” Abibi said in relation to his chances.

“I’ve been an international almost all the ages from 17, 18, 19 and 21. The seniors is a bit difficult because the Albania team has two goalkeepers that play in Serie A – one is with Lazio and the other one signed this year for Torino.

“I’ve been in contact with them a few times, even when Filippo (Giovagnoli) was here and we won the President’s Cup where, as we all know, I saved two penalties. I know that they are interested, so maybe soon I can receive a call from them. The most important thing at the moment is the European games and Dundalk and then everything will come.”

After negotiating ties against both Newtown AFC and FCI Levadia Tallinn, Dundalk now face a stern test against Dutch Eredivisie side SBV Vitesse in the first leg of their Europa Conference League third-qualifying-round tie in Holland on Thursday (kick-off, 6pm).

“We all know their quality is good,” added Abibi.

“They are the favourites to win, but we will prepare our game as always. I hope that I can help the team with saves and whatever we need.”

With the exception of long-term absentees Brian Gartland and Daniel Cleary, Dundalk travelled to Arnhem on Wednesday morning with a full complement of players.

Thursday evening’s match is to be refereed by Anastasios Papapetrou (Greece) and will be streamed live via the subscription-based LOI TV platform, with passes costing €10.