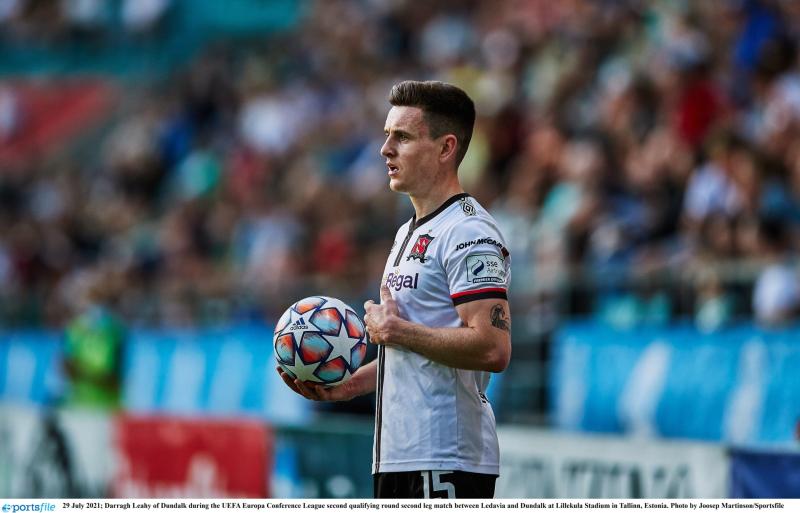 Darragh Leahy in action for the Lilywhites during last week's win over Levadia in Estonia. Photo: Joosep Martinson/Sportsfile

Darragh Leahy says his best is yet to come ahead of Dundalk’s trip to the Netherlands to face SBV Vitesse in the Europa Conference League on Thursday evening (kick-off, 6pm).

The 23-year-old left-back had fallen out of favour at Oriel Park before head coach Vinny Perth’s return to the club in June, but Leahy is now firmly back in the first-team picture.

Leahy has been an ever-present in the Dundalk defence since Perth’s return and is once again expected to start against Vitesse at the state of the art GelreDome in Arnhem.

“It was extremely tough mentally more than anything,” he told of his early-season woes.

“It was really hard, but I had to just keep coming in, not let my standards drop and keep working hard every day waiting to get my chance. I only played two games, so it was extremely frustrating, but you can see how quickly football changes, so you just have to be ready for when you do get an opportunity.

“I never experienced that, I hadn’t been in that situation before. Mostly I’ve played games, so it was different when you’re sitting back and you’re on the bench and different things. You can nearly start to doubt yourself as to why you’re not playing.”

Dundalk have enjoyed a significant upturn in form since Perth’s return to the dugout, with the team suffering just one defeat in his ten matches in charge in all competitions.

In Europe this season, Leahy was credited with two assists in the first leg of the 5-0 aggregate win over Welsh side Newtown AFC, before starting both legs of the dramatic stoppage-time success over FCI Levadia of Estonia in the second qualifying round.

It was the first time in history that Dundalk went four successive matches unbeaten in Europe, and Leahy concurs that Perth is responsible for the team’s recent stabilisation.

“When Vinny came in, he steadied the ship and had conversations with me,” he added.

“He said just go and prove yourself and show the player that you are, that we signed. It was reassuring because I was lacking confidence as you would be when you’re not playing. He got that confidence back into me. The run of games would have helped get the match sharpness and everything that comes with that back up and running.

“I wouldn’t say I’m back to my best. I’d say I’m getting there. Get more consistent, get more games and I think the rest comes after that.”

Dundalk next face Vitesse, who finished fourth in the Eredivisie last season and have former Dutch international midfielder Riechedly Bazoer currently in their ranks.

Another familiar face in the Vitesse side will be Israeli international right-back Eli Dasa, who played against Dundalk for Maccabi Tel-Aviv in the Europa League groups in 2016.

However, despite Vitesse’s riches, Leahy believes the fact they haven’t yet played a competitive game this season could prove advantageous for the League of Ireland side.

“As a team, we’ve looked at them the last couple of days. They’re in pre-season, but no doubt they will be ready for the game on Thursday.

“They are a top team, but I think to a certain extent, our fitness levels will stand to us towards the later stages of the game.”

Thursday evening’s match is to be refereed by Anastasios Papapetrou (Greece) and will be streamed live via the subscription-based LOI TV platform, with passes costing €10.

Will Patching relishing opportunity to face top opposition in Europe