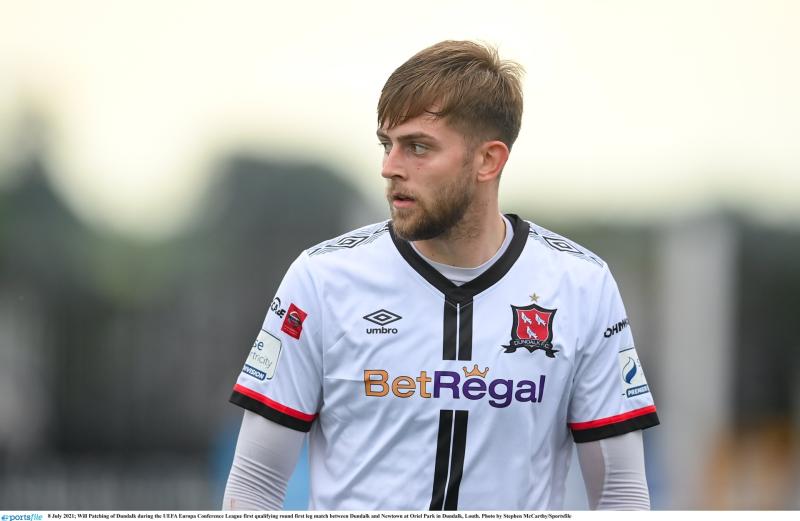 Will Patching in action. Pic: Sportsfile

Will Patching’s stoppage-time winner against FCI Levadia Tallinn at the A. Le Coq Arena has sent Dundalk FC into the third qualifying round of the Europa Conference League.

After the sides drew 2-2 at Tallaght Stadium a week earlier in the first leg, Ernest Agyiri put the Estonians ahead before David McMillan equalised a minute before the break.

As the game neared its conclusion, both teams looked like they were settling for extra-time, but Patching had other ideas and he sent Dundalk through in the 92nd minute.

In what was a cagey opening in the Estonian capital, Dundalk had the game’s first effort when Sam Stanton fired a shot over from distance after some neat play from the visitors.

Levadia took the lead on 17 minutes, however, when Ghanaian winger Agyiri, out on the left, rifled a shot which went through Dundalk goalkeeper Alessio Abibi and into the net.

Stunned by that concession, Dundalk gradually began to settle after that and went close to equalising when Stanton’s long-range attempt crashed off the frame of the crossbar.

Patrick McEleney, scorer of the only goal in Dundalk’s FAI Cup win at Treaty United four days earlier, was next to try his luck, but his low drive was straight at Karl Andre Vallner.

The Lilywhites deservedly levelled on 44 minutes when Vallner failed to deal with a Darragh Leahy cross which was kept alive by Raivis Jurkovskis before Greg Sloggett teed up McMillan, who got the better of Milan Mitrovic and finished into the bottom corner.

Mark Oliver Roosnupp, who replaced the injured Bogdan Vastsuk, saw his shot trickle harmlessly wide of Abibi’s post for the hosts in what was virtually the last kick of the half.

Dundalk started the second half brightly and some slack defending from Maximiliano Ugge resulted in the industrious Stanton firing in a shot which flashed across goal.

Sloggett’s shot from outside the box was straight at Vallner on the hour-mark, but a minute later, the Levadia stopper spilled Sonni Nattestad’s header from a Patching corner before eventually gathering, as Leahy and McMillan were both ready to pounce.

Shortly after that lucky escape, Agyiri fired straight at Abibi after Roosnupp was brilliantly tackled by the superb Boyle, as Levadia began to press for a winning goal.

However, the Estonians failed to create anything of note after that, with McEleney curling a shot inches off target after the ball broke to him on the edge of the area.

The game looked destined for extra-time when, after some good pressing from Wilfried Zahibo, McEleney played in Patching, who controlled brilliantly before he finished expertly beyond a despairing Vallner to break Levadia hearts deep into stoppage-time.

With seconds remaining, Levadia desperately sought an equaliser and Maksim Podholjuzin’s volley from distance was deflected off target, but nothing amounted from the resulting corner as Dundalk held out for another impressive result on the continent.

Dundalk next face Vitesse, who finished fourth in the Eredivisie, in the third qualifying round, with the first leg due to take place at the GelreDome in Arnhem next Thursday.