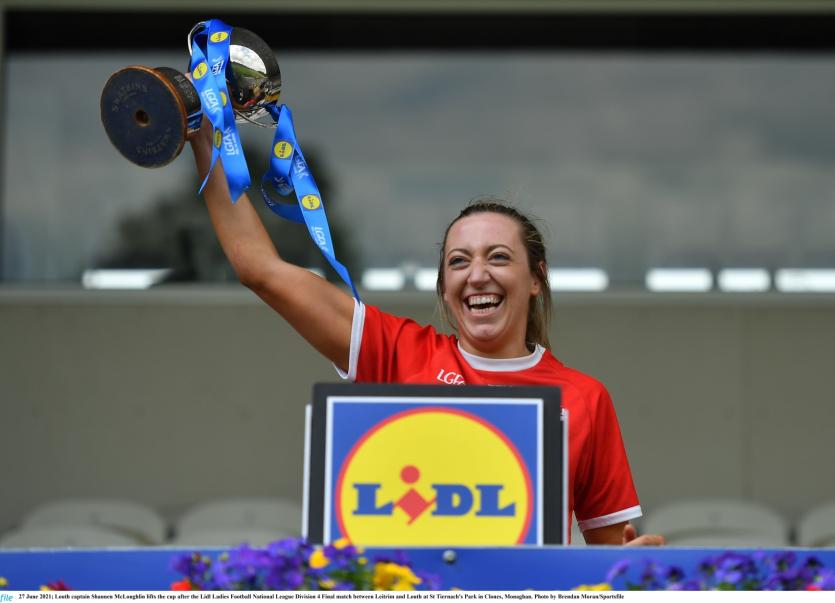 It has been a glorious few weeks to be associated with the Louth Ladies Footballers, who after years of coming up just short finally ended their barren league run in recent seasons by putting Leitrim to the sword in impressive style to seal the Division Four crown.

It was what they deserved after hitting top form this year, after an opening day defeat to the girls from the West, there was empathic wins over Antrim, Derry and Offaly as Wayne Freeman’s troops found their grove.

Shannen McLaughlin has been front and centre to all that has been good about The Wee County, an ever present in the team at centre half back she kept her side defensively solid while also not being afraid to veer forward and help set up attacks when required.

Since the win, the atmosphere has been great in the camp, but she knows it is the championship that people remember, and their early season success has been quickly forgotten as they look to make an impact at the intermediate level.

“I think it gave us all confidence, seeing how well we can play together” recalled the young the captain when speaking about the league campaign.

“I just think our performances have been exceptional, since winning the league we had one night off training and then we were straight back at it, the league forgotten and the focus completely on the championship.”

“Everyone is still hungry to get that one step further, we’ve done the league now so let’s just move onto the next thing that can be achieved and that’s the championship, do our best to leave the county jersey in a better place, maybe end the year back in Croke Park.”

Last year was their first year back at that grade having won the Junior Title in 2019, however they were drawn into a tough group alongside Longford and eventual finalists Westmeath.

They proved the critics wrong by beating a fancied Longford side, before losing out to a talented Lake County outfit and exiting the championship. This year they play Down and Offaly and expectations in the camp are much higher as they look to show they belong at this level.

“We played Westmeath and we all got a little bit of a shock. I think deep down we knew we were good enough, but the performance wasn’t at the right standard that day. This year it’s important we prove we should be in Intermediate and competing for the title."

“It is not about just being in the competition, we should be one of the best teams at this level, it is about making that statement and proving it to everyone.”

First up will be Down in Newry this Sunday (throw in 3PM), a team who despite struggling a little for form in the league this season will be full of confidence having already beaten Offaly in the opening round by 3-14 to 2-14 along with recently defeating Fermanagh to win the Ulster Intermediate title.

They haven’t met too often in competitive action, but as near neighbours they have crossed paths plenty of times as part of both teams’ preparations in recent years.

The Clan Na Gael’s clubwoman has been impressed when watching both of those Down victories back but is confident they have enough in the tank to beat them, thus showing why they deserve their hard-earned spot in Division Three.

“We have played them in challenges before and it’s always been close enough. They are extremely fit, they will run the ball a lot and that is something we’ll need to be on top off, hopefully we’ll come out the better on the day.”

“I think it is our opportunity to put our stamp on Division Three. We are making a statement before we get there next year and we’d be hoping to get the win.”

With a forward line in such fantastic form, her confidence is clearly backed up with evidence, the high numbers they have been shooting from play this year a valid reason for the young defender to be excited about their prospects.

3-9 against Offaly, 3-12 against Derry along with 3-9 and 4-8 respectively in their encounters with Antrim and Leitrim clearly shows the potency of the Louth attack, one of which McLaughin has been praising highly.

“I think we have top class forwards, who have looked so special this year. Kate Flood, Lauren Boyle, Niamh Rice, Denise Mckenna and Laura Collins have been immense, you can really see them linking up with each other and if one of them is having an off day, the other is on form.”

“Everyone got their fair share of scores which is great to see, as you are not relying solely on one player as there is so much talent. Even the likes of Eimear Byre and Roisin Kavanagh off the bench, all these girls are fantastic to have available to us, it’s great to have strength and depth in the panel.”

While trophies and personal plaudits are what many use as metrics for success, McLaughlin is looking to the future and what effect the Senior team can have on the next generation of footballers.

She feels the county has gone from strength to strength since winning the Junior Title in 2019 and is hopeful that they can continue to be successful, thus leaving the Louth jersey and the sport in general in a much better place than where she found it.

“Football in the county has improved so much that I think when the younger girls, the underage teams see us doing well it leads to more interest and excitement around the county and you are getting more girls involved in football and that’s what matters most.”

“Getting young girls playing football and sticking at, having role models to look up to and from my perspective that would be the most important thing, it’s all about leaving that jersey in a better place, that’s what you want to for the girls coming through.”