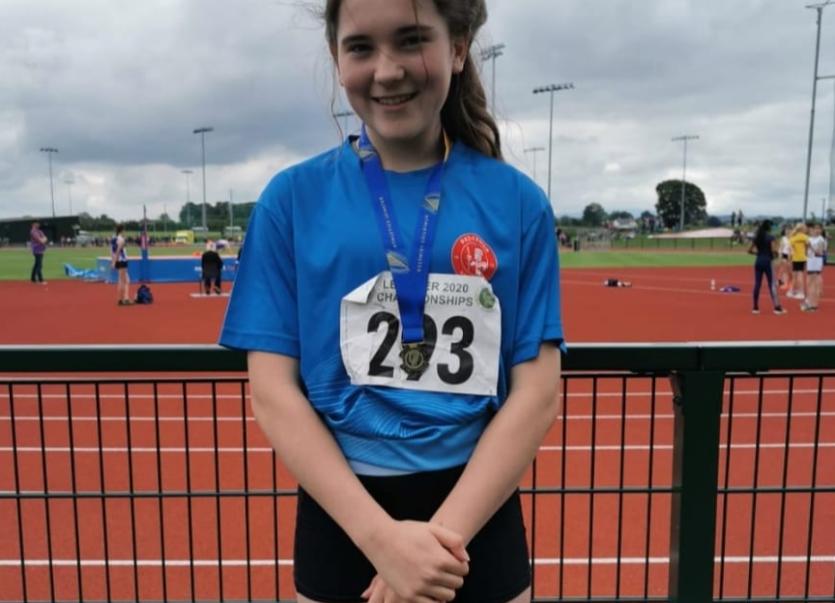 On Saturday the Leinster juvenile championships were held on the track at Carlow IT. Blaithin Carragher was Redeemer AC's sole representative on the day, but Blaithin served up up outstanding performances to secure double Leinster gold winning both the U13 Shot putt and Javelin.

After the excitement of our success at Saturday's Leinster Championships in Carlow, the club turned their attention a little closer to home on Sunday, with the focus turning to the final day of the Louth Track and Field Championships which were held at Bush.

First up was the girls U10 Turbo Javelin, in which the Dundalk based club were well represented with two sets of twin sisters, Lily and Lucy Rogers and Chloe and Robyn Browne. Their cousin Macey Browne also donned the blue jersey in competition for the very first time.

Robyn, Lily and Lucy all threw brilliantly on the day, narrowly missing out on a medal , with Chloe and Macey in a dingdong battle for honours, Chloe taking the Silver and Macey the Bronze.

Chloe followed this up with Bronze in the U10 Long Jump in a titanic battle between herself and Lucy Rogers who finished 4th. Both girls actually jumped the same distance  with Chloe just finishing ahead of Lucy on countback. In the same long jump competition Lily Rogers won a fantastic silver.

Outstanding performances from the girls in a very competitive field, Redeemer finishing 2nd,3rd and 4th.  Chloe completed her hattrick of medals by winning Gold in the 500m. In the same 500m Robyn Browne won her heat but in a timed event agonisingly finished 5th overall.  She also competed very well in the long jump and 60m.

In the U10 60m Lily Rogers eased through the heats and into the final where she came oh so close to a medal finishing 4th.

First up in the U11's was Emma English who was also competing for the first time. Emma got to the final of the 60m and ran brilliantly, as well as throwing well in the turbo Javelin. Next up was her 600m heat and Emma was superb coming home in 2nd but in another timed middle distance event she narrowly missed out on a medal finishing 5th overall.

Ellie Shevlin also in her first Championships performed very well in the U11 60m, turbo javelin and 600m.

Our only boy competing on the day was Harry Rogers who performed very well in the long jump and turbo javelin and came so close to a podium finish in the 600m finishing 4th, but Harry made up for that by storming to victory, taking Gold in the 60m Final.

Amelia Grace Carragher competed in the 600m and the long jump and had a fabulous victory in the U11 Turbo Javelin.

Finally we have Emma Byrne competing in her first competition, in which she eased into the final of the U11 60m and acquitted herself very well in the final. Next up was the turbo javelin where Emma finished 5th but she saved the best for last winning the U11 long jump with a fantastic jump of 3.38m.

It was an amazing championship season for Redeemer, who competing for the first in 25 years. At County champs they won eight Gold medals, five silver, and three Bronze.

At Leinster level they secured four Gold and at the Masters level  brought home three Gold and one Silver. They also have Bláithín Carragher and Emma Conway going forward to represent the club at All Ireland level in the coming months.

Training continues every Monday and Wednesday. If you would like to get involved in the club Contact Niall on 0857437717 for further details.