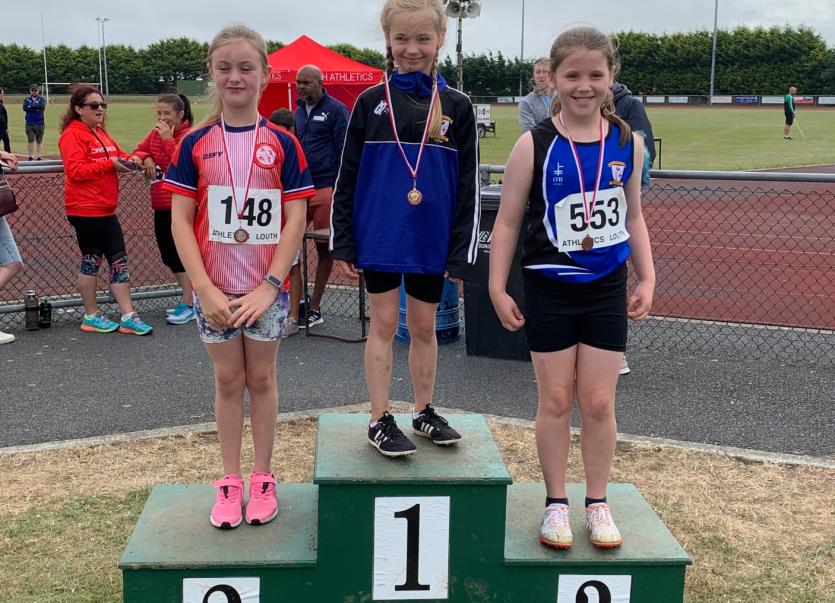 The curtain came down on the Louth Juvenile Track and field Championships when day Five of this year's event took place at Glenmore AC’s track at Bush where the age groups of U9 to U11 enjoyed a great day of athletics.

The highlight from the St Peters Club was the U9 Long Jump with two podium places. Estera Zenderowska jumped fantastically well to take Gold and was joined by her club mate Niamh McQuillan who did exceptionally well To take bronze. Both girls also ran very strongly in their sprints with both making it through to the final.

Saoirse Fallon, making her debut had a great performance in her sprint heat narrowly missing out on progressing. Rian Watters also making his St Peters debut performed really well and will have gained great experience. Oliver Philips showed his potential, performing gallantly in the boys U9 sprint, making it through to the final and also performed well in the field events.

Sabina Zenderowska ran very well in the girls U10 heat and semi final and was just outside the medals, Cara Smyth in her first race had a great day and performed well in all her events. The St Peters U11 girls enjoyed their first outing and did themselves and the club proud with both Maya Hearty and Sienna Smyth doing well.

As for the U11 boys, Conor Duff had a strong 600M run to finish third in his timed heat however unfortunately for him his time was the fourth fastest over the two timed heats. Caolan McKinnion performed well in the Turbo javelin and after a bad start worked his way through the field to finish in fourth place in his 600M race. Cillian Fallon also had a good race in the sprint.

On Saturday Donnacha Reidy was the club's sole representative in Carlow for day One of the Leinster juvenile Championships. Donnacha, who has just returned from a broken Collar Bone gave everyone a scare when he took a nasty tumble with 200M to go in his 600M U13 race.

After some medical attention this brave young athlete dusted himself down and took his place on the start line of the 80M sprint, coming through both his heat and semi final and although not medaling he deserves great credit for his endeavour.

Green Minister calls on farmers to reduce the use of fertilisers