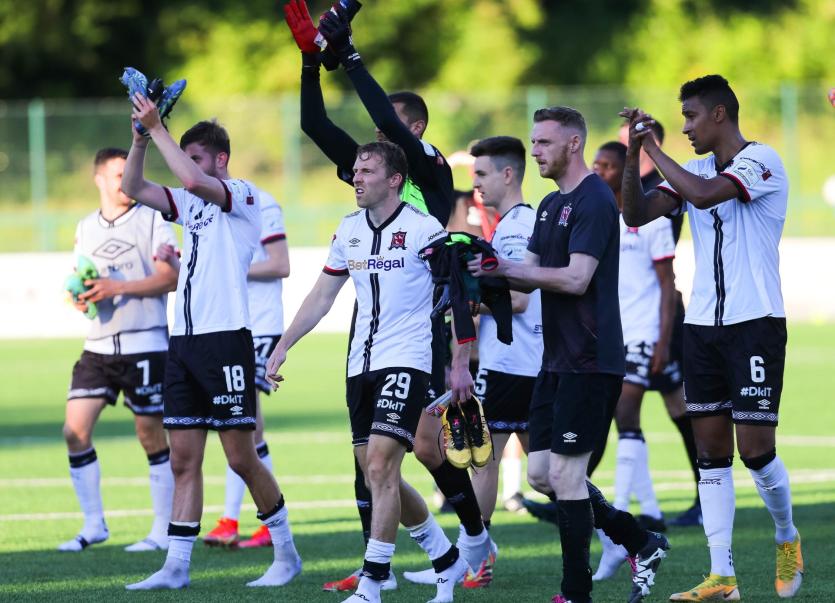 Dundalk players celebrate their progression to the next round of the Europa Conference League following a 1-0 away win over Welsh side Newtown. Pic: Gareth Everett/Sportsfile

Dundalk FC are into the second qualifying round of the Europa Conference League following a comfortable 1-0 win over Welsh side Newtown AFC at Park Hall Stadium.

Michael Duffy’s 52nd-minute goal gave Vinny Perth’s side a 5-0 aggregate-win and set up a second-qualifying-round meeting against either Levadia Tallinn or St Joseph’s FC.

Dundalk, who were unchanged, weren’t long settling into the game, and had their first attempt on 20 minutes when Newtown stopper David Jones saved Will Patching’s shot.

The Newtown goalkeeper had to save again not long after that, comfortably dealing with Duffy’s effort before at the other end, James Rowland scuffed his half-volley wide.

Daniel Kelly spurned the best chance of a largely uneventful first half when he blazed over the top from Duffy’s reverse-pass, as the two sides went in scoreless at the break.

Patrick McEleney, who will join Derry City at end of the current season, almost gave Dundalk the lead in spectacular fashion four minutes after the restart, catching Jones off guard with a quick free-kick from just inside his own half which came off the post.

Dundalk took the lead on 52 minutes through a quick counter-attack when Kelly played in Duffy, who ran half the length of the pitch before comfortably slotting beyond Jones.

5-0 up on aggregate, Dundalk were coasting, and McEleney’s speculative effort went over before Sonni Nattestad headed straight at Jones from Patching’s inswinging corner.

Kelly missed a great chance to further enhance Dundalk’s lead when he missed the target from close range after getting on the end of a beautiful McEleney pass over the top.

Newtown’s best chances came when Nicholas Rushton forced a magnificent fingertip save from Abibi, and from the resulting corner, he saved again from Jamie Breese.

Dundalk looked to equal their biggest ever away win in Europe (2-0), but substitute Ole Erik Midtskogen skied his attempt over after some good work from Han Jeong-Woo.

From Carlingford Castle to the Proleek Dolmen, public asked to Protect Our Past amidst rise in damage to heritage sites