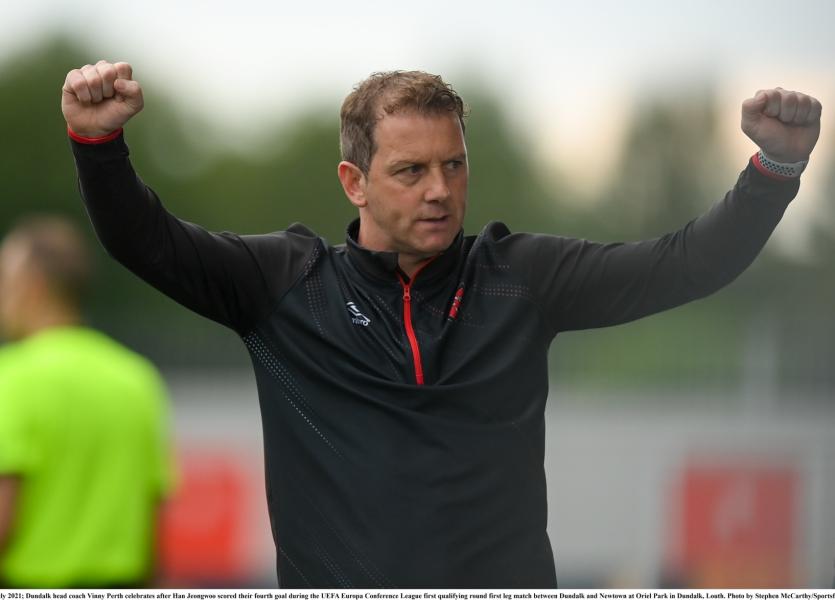 The Lilywhites take a commanding 4-0 lead to Park Hall in Oswestry, Shropshire today (kick-off, 5.45pm), courtesy of goals from Michael Duffy, David McMillan, Will Patching and Han Jeong-Woo in the first leg which was played at Oriel Park last Thursday.

The winners of the tie involving Levadia Tallinn (Estonia) and St Joseph’s FC (Gibraltar) await in the second qualifying round, but Perth isn’t looking beyond Newtown.

Dundalk beat Levadia home and away in a Europa League qualifier in 2018, and the Estonians lead St Joseph’s 3-1, with the second leg taking place in Gibraltar on Thursday.

“It’s been a whirlwind in the last three weeks,” said Perth. “I think this has been the most difficult week I’ve probably had at the club ever because of Covid issues and because of different things. I just don’t know where that goes or where that takes us.

“It’s not that you’re working on Levadia Tallinn or the winners of that tie. Normally, you’ve got a little one eye on it. I know the result of the game, but I don’t know anything about any opposition at the moment. I think we’ve just focused in on one game at a time.

“We’ve had a chat after the game and we feel we’ve got areas of improvement, so it’s just one game at a time. Days gone by, I might have made seven or eight changes ahead of the game on Tuesday. I don’t think we can do that.

“I think we’ve got to keep building, make the team better, make the team understand what we’re doing and take one game at a time. It’s really like that.”

Ahead of Thursday’s game in Wales, Dundalk are expected to be without Patrick Hoban, Sean Murray and Cameron Dummigan following a minor Covid-19 outbreak at the club.

Perth has praised the FAI’s approach to the pandemic, insisting that Dundalk’s predicament could have been worse if not for the guidelines that have been put in place.

“Dr. Alan Byrne has led this brilliantly from the FAI,” said Perth. “What he’s done is he’s laid out protocols. The protocols here of not showering. Players are travelling on their own. We have some guys living in a house, so if one goes, they all go, so we were lucky in that sense.

“The meetings are on a stopwatch for arguments sake and once it goes, for someone who likes to talk too much, it’s difficult, but once it goes 14 minutes, 30 seconds, we’re all out of there.

“It’s difficult, but it’s managed well and I must give credit to the FAI for being so strict on the guidelines. It’s helped us to be honest because we’ve no real close contacts as a result of following the protocols.”

Tuesday evening’s game is to be refereed by Andrei Chivulete (Romania) and will be streamed live via the subscription-based LOI TV platform, with passes costing €10.