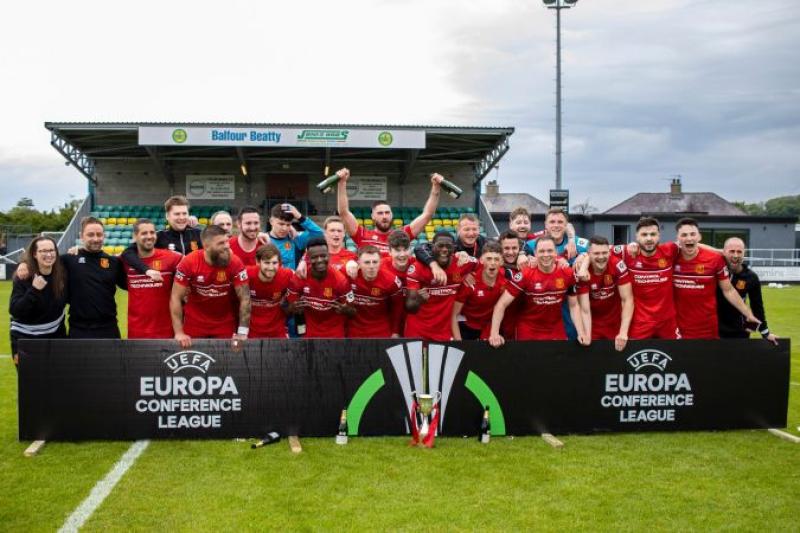 Dundalk's European opponents Newtown AFC celebrate their play off victory which bagged their place in the competition. Credit: Newtownafc.co.uk

Newtown finished seventh in the Welsh Premier League last season, but have qualified for the Europa Conference League after winning the end-of-season European play-offs.

With a coefficient of 1.000, they are the joint lowest-ranked team in this season’s competition and are classed underdogs, although both camps have been hit with Covid.

It’s only second time since the turn of the millennium that Newtown have qualified for Europe, with their last campaign being ended by Danish side FC Copenhagen, who beat them 5-1 on aggregate in the second qualifying round of the Europa League in 2015.

That was preceded by the only European success of Newtown’s history – a 4-2 aggregate win over Valetta of Malta in the first qualifying round of that season’s competition.

Their current manager, Chris Hughes, has been in charge of the club since 2013, and the Wrexham Glyndwr University lecturer is expecting a difficult assignment on Thursday.

“The aim is to still be in the game after the first leg on Thursday,” he told The Democrat.

“We’re aware that Dundalk were the highest seeds in our pot that we could have got. I think they were second or third highest seeds in the draw. I’m not completely up to date on the politics of the running of the football club and what’s going on.

“We’ve only been doing our research in the last two or three weeks since the draw was made. We’ve watched all their games. They’ve had a change of shape since the new manager has come in.

“They’re very British in respect to their style. They’ve obviously got players who have played in England before, so we know a little bit about them. It will be a game that we’re used to having. Budget-wise, we’re probably about second lowest in our league.

“For us to get into Europe anyway is a huge achievement and coming up against sides with bigger budgets and better players is something that we relish and something we enjoy and Thursday will be no different.”

Newtown have won just two major honours throughout their long 146-year history and both of those Welsh FA Cup successes came way back in 1879 and then again in 1895.

The closest they came to lifting any kind of silverware in recent memory was in 2012 when they agonisingly lost the Welsh League Cup final on penalties to Afan Lido.

Newtown also finished runners-up in the Welsh Premier League on two occasions in 1995/96 and 1997/98, but it’s been over 20 years since they finished in the top four.

A former Dundalk player/manager, Harry Beadles (1929/30), hailed from Newtown and played for his hometown club before winning an English title with Liverpool in 1921/22.

Of the current Newtown squad, 33-year-old midfielder Sean McAllister is the highest-profile member, having played in the English Championship with Sheffield Wednesday.

Thursday evening’s game is to be refereed by Luca Barbeno (San Marino) and will be streamed live via the subscription-based LOI TV platform, with passes costing €10.

The second leg will take place next Tuesday (kick-off, 5.45pm) at Park Hall Stadium – the home of TNS – in Wales, with the winners of the tie involving Levadia Tallinn (Estonia) and St Joseph’s FC (Gibraltar) waiting at the second qualifying round stage.