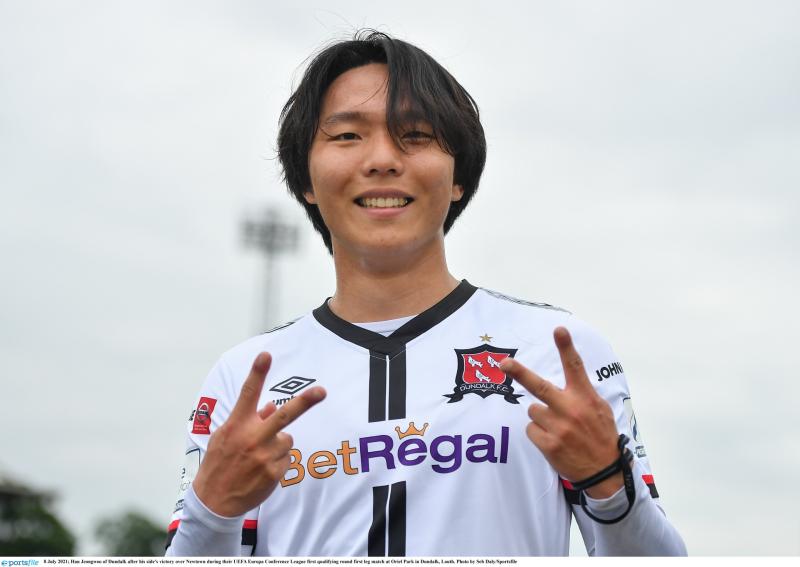 Dundalk equaled their biggest ever win in Europe on Thursday evening after recording a 4-o win over Welsh side Newtown in the first leg of their Europa Conference League tie.

Goals from Michael Duffy, David McMillan, Will Patching and Han Jeong-Woo late on means The Lilywhites take a commanding lead to Wales for the second leg next Tuesday.

Both camps were hit with Covid-19 outbreaks in advance of this game, with Patrick Hoban, Sean Murray and Cameron Dummigan all absent from the Dundalk squad.

That setback didn’t seem to effect Vinny Perth’s side, however, as they dominated throughout against what are the lowest ranked team in this season’s competition.

The part-timers from Wales started reasonably okay, but Dundalk had the game’s first chance on eight minutes when Patrick McEleney’s shot from outside the box went wide.

The outstretched arm of Newtown goalkeeper David Jones kept out McEleney’s headed attempt not long after that, before McMillan’s shot from distance went narrowly over.

Dundalk took a deserved lead on 33 minutes, when Daniel Kelly was played in by McMillan before crossing for Duffy, who turned home to put The Lilywhites 1-0 in front.

The hosts doubled their advantage six minutes later, when Darragh Leahy’s beautifully whipped cross was met by the head of McMillan, who powered home Dundalk’s second.

That was the 12th European goal of McMillan’s career, which now means no League of Ireland player – past or present – has scored more goals in European competitions.

Newtown almost got themselves back into the game straight after the restart, when some slack defending from Sonni Nattestad allowed Jamie Breese in on goal, but Alessio Abibi was on hand to save, before the Albanian saved again from Nicholas Rushton’s volley.

From the resulting corner, James Davies saw his header deflected over, but that mini-spell was as good as things got for Newtown, who fell further behind on 62 minutes.

Exiled and omitted from Dundalk’s European squad a year ago, Patching got Dundalk’s third with an absolute screamer from 30 yards which flew right into the bottom corner.

Substitute Han Jeong-Woo made it four deep into stoppage-time to equal Dundalk’s biggest ever win in European competition – a 4-0 win over Fram Reykjavik in 1981.