Division One Round Up: Mulroy Brace seals victory for the Martins 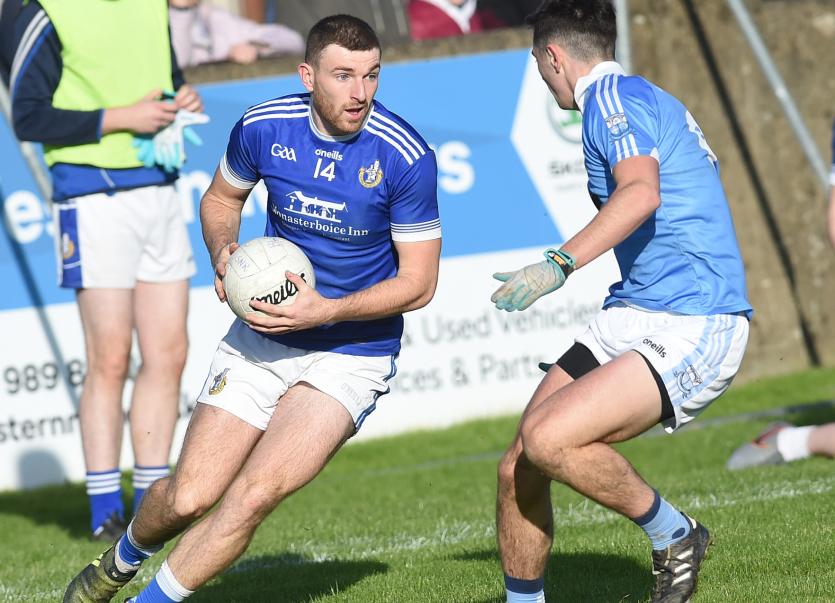 Naomh Mairtin claimed a six-point victory over St Mochtas in an entertaining encounter at Monasterboice on Saturday evening.

In an absorbing first half that produced five goals, it was the hosts who looked in a comfortable position as they led by ten points as the teams turned around.

However, the second period saw the teams fail to reproduce the fireworks in an attacking sense and although the Louth Village men had the better of things after the break, they were unable to complete the comeback.

The game was played at a lively pace from the outset and after Conor Whelan opened the scoring for the hosts, Sam Mulroy fired in the first goal of the game from a seventh minute penalty.

The Mochtas hit back with a goal from Declan Byrne on 12 minutes but just after the end of the first quarter, the Jocks added their second through Mulroy.

Points from Sean Healy and John Clutterbuck extended the gap but the Mochtas gave themselves hope when Byrne scored his second goal on 26 minutes. However, it was the Mairtins who struck the final blow of the half when Conor Whelan found the net to put his side 3-9 to 2-2 ahead at the break.

Both sets of defences improved in the second half as they managed to prevent any further goals and although the Mochtas were on top for much of the half they were unable to prevent the hosts from picking up the win.

The clash between two of the contenders for silverware this year certainly didn’t disappoint as St Marys and Newtown Blues played out an exciting draw last Saturday night.

Coming to the end of the encounter in Ardee, it looked as if the Drogheda men were going to come away with a victory. However, in a dramatic conclusion it was Tom Jackson who fired over the equaliser to give his side a share of the spoils.

While Jackson was one of the Marys heroes, Ross Nally took centre stage for the Blues as he finished with a personal tally of 1-9 to help his side claim a deserved victory.

Nally’s goal arrived in an entertaining first half but it wasn’t enough to see his side take an advantage at the break as scores from Liam Jackson and Luke Matthews helped the hosts level the game at 1-7 to 0-10.

The second half proved equally tight as both sides continued to show their attacking intent and a goal from Ryan Rooney kept the Marys in contention. It appeared that the Blues had done just enough to snatch victory only for Jackson to have the final say with the equalising score.

A strong second half performance saw St Brides come from behind to record an impressive win over St Patricks in Knockbridge on Sunday evening.

Six unanswered points between the 39th and 50th minutes put the hosts in control of the game and as the Pats challenge faded in the closing stages the Brides ran out winners by five points.

The Brides began well and were 0-3 to 0-1 ahead inside ten minutes before a goal from Matthew Pagni had the visitors in front. Although the Knockbridge men hit back to level, the Pats went in at the break with a 1-4 to 0-6 lead thanks to a Conor Grogan point.

It was looking good for the visitors when Paddy Keenan stretched the lead from a free, but that was as good as it got for his side as the Brides burst into action. They reeled off six successive scores to take a grip on proceedings and although the Pats battled in the closing stages, it was too late to save the game and the Brides deservedly hung on for the points.