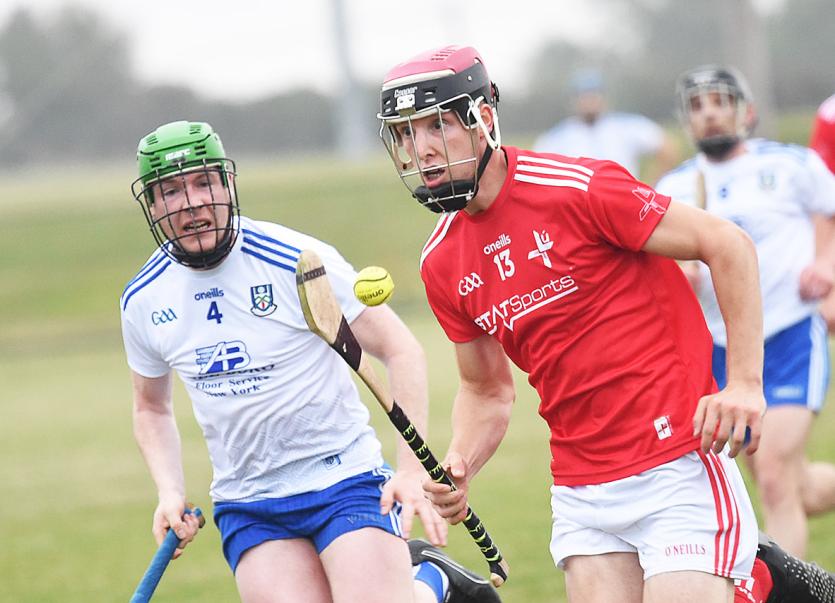 The long drive home from Longford last weekend was not a wasted one for Louth, as they overcame near neighbours Monaghan to realign their Lory Meagher Cup aspirations for this season.

There was plenty to ponder after the hefty defeat, conceding five goals in 15 minutes last weekend is something any team in the country would struggle to deal with and The Wee County showed they are fast learners six days on. On home soil they put Monaghan to the sword by seven points.

The concession of goals, work rate and ball striking were no doubt all worked on during the short turnaround by Louth manager Paul McCormack, but they might not have been visible only for Paul Matthews early goal.

The towering St Fechins man buried a determined low shot to the net in the opening minute as Louth’s newly constructed team got the perfect start you suspect they needed. Darren Geoghegan quickly added three points to leave Monaghan scoreless and shellshocked.

Mattock Rangers Gary Rellis came into the team between the sticks, but Donal Connolly was conspicuous by his absence from the match day squad altogether.

Ger Smyth was deputy net minder on the day as Connolly perhaps was unfairly deemed a scapegoat for the concession of eight goals the week previous.

Regardless, it would be a while before Rellis had anything of note to do, keeping his concentration the highlight as Louth dominated the opening. The reintroduction of cornerback pair Matthew Fee and Andrew Smyth would have brought great comfort anyway.

The two defenders were outstanding in the successful league campaign and were welcomed back with both arms. Much to Monaghan’s credit, the visitors landed the next four scores through full forward Stephen Lambe and Fergal Rafter opening their accounts as they battled back gamely.

Just when you felt Louth could be letting a lead slip, the reigning Lory Meagher Player of the Year Andrew Mackin was on hand to soothe those doubts with his first goal after the first half water break.

Mathews was again to the fore, but Louth’s next move highlighted the noted lift in their attitude on the day. Hooking and blocking after Rafter scored a free, while Monaghan were in possession the midfield duo combined to steal the ball and combined to set up the second goal.

The new centre field pairing showed industry and guile to provide the platform for victory. Seanie Crosbie with the turnover and then vision to find number nine Feidhelm Joyce who swiftly sent Mathews on his way.

Mathews turned and had the Farney men in disarray straightaway thus providing the overlap to hand pass to Mackin at the back post to collect and finish tidily. You could tell from Louth’s mood that they wouldn’t be on the losing side.

That was compounded further when Rellis made a terrific double save to deny Monaghan full forward Stephen Lamb and his corner forward Niall Garland. The second save was brave and spooked Lamb into missing the final shot for a point at the end of the sequence.

The Impressive Lamb was a prominent figure throughout the contest and would find the target along with Castleblayney talisman Fergal Rafter to make it 2-7 to 0-8, healthily in Louth’s favour.

The men in Red got the perfect start to the second half and one which Monaghan greatly rued, with Louth striking 1-3 to no reply. Mathews again was key, turning his new marker Sean Tierney on the 50-yard line, the whole Monaghan defence once again opened up by the Fechins man.

He soon showed his sublime hurling skills again, some nice stick work and awareness allowed him to play a neat one-two with club mate Seán Kerrisk before striking a shot off the crossbar. Mackin, ever the poacher was on hand to strike the rebounded shot into the net off the deck.

There would be no way back for Monaghan now. Joyce quickly added his first point of the evening, using his pace to fire over on the run, which was the pick of his two scores on the night.

Just four minutes into the second half and Louth were already comfortably ahead, leading by eleven points, 3-10 to 0-8 at this stage with plenty of time to reap further damage.

It must be said, Monaghan were coming in cold and Louth were in this position last week so with that in mind, the hosts knew what to do. Shut up shop and control the scoreboard and that is exactly how it transpired.

Peter Fortune excelled at half back upon his return and saw a lot of dropping ball come his way, Ryan Walsh was also prominent before being replaced by Paddy Lynch.

Geoghegan added to his tally and dutifully kept the scoreboard ticking, the Naomh Moninne man’s accuracy and ball striking was exceptional all evening.

His opposition free taker Rafter was also in fine fettle in the second half as he would end up with one less than Geoghegan with eleven.

Still, frustrations grew within Monaghan as time was running out when unusually quiet Mark Treanor added to the quiet day with his second yellow card which saw the Ulster side finish with fourteen men.

The win for Louth in the end was comfortable and will no doubt boost morale ahead of the business end of the competition.

Depending on how this weekend plays out, Louth look most likely to now finish second in Group A. That would mean a showdown with Cavan for a place in the Croker showpiece once again. Plenty more for the hurlers to ponder still.