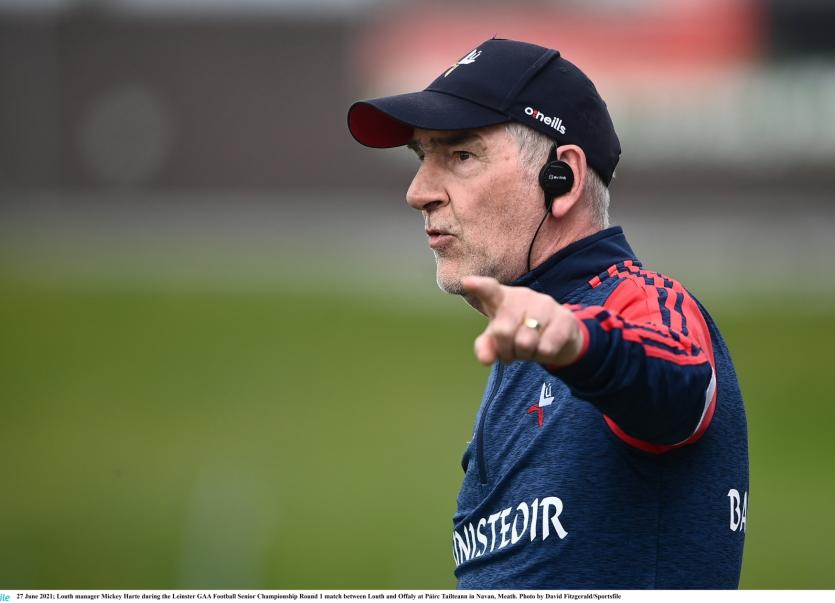 Louth manager Mickey Harte on the sidelines during their clash with Offaly. Pic: David Fitzgerald/Sportsfile

And just like that, the first year of Mickey Harte’s relationship with the Louth footballers has come to an end.

He brought plenty of interest back into the fortunes of the Wee County and vitally secured promotion to Division Three in what was undoubtedly the highlight of the year.

However, as the small cohort of spectators vacated the Navan venue, the wily veteran reflected on the key moments, such as the last gasp miss by captain Sam Mulroy, that saw his troops exit the Leinster Championship by nine points (3-19 to 0-19) despite a spirited effort and he felt overall the final score was unfair on his team.

“I would say it was harsh. I think the effort the boys put in today they didn’t deserve to get beaten by three goals” he stated. “Unfortunately, we had the chance to seal the game in normal time and we just missed it, now you’d back Sam every time to score those but that’s life sometimes.”

“The chances come your way at that time, and you often pay the price for it, but I suppose the goals were a killer to us. The one in normal time was a real killer because even though we got back into it, it took serious hard work to get back and we got back with points, we didn’t get a goal ourselves.”

“We had to work really hard to draw the game, we put a lot into that and that probably cost us the game, as we began to run out of steam the longer the game went on. That is to be expected as they play their football at a higher level and are going up to a higher level again.”

Throughout their league campaign, the Wee County has been a high scoring side and with that has come plenty of opportunities to blast a hole in the net.

They had notched seven goals so far this year, but unfortunately chances were slim against Offaly, something Harte was disappointed by but not overly surprised given the jump in the quality of opposition they faced.

“It is a learning experience for the players and for us to know a few things we need to go and work on for next year.”

Despite his first year in charge coming to an end prematurely with a loss, The Tyrone native was keen to praise all his players following the final whistle who have given up so much to put the pride back in the Louth Jersey.

“We couldn’t have asked for any more effort from the players, they died in their boots today and that was the big thing about it. They never threw in the towel, they kept pressing and they kept trying right up until the bitter end.”

“Even though they knew this effort isn’t going to win this game, they were not going to let them get any further away from us, so a lot of credit has to go the boys.”