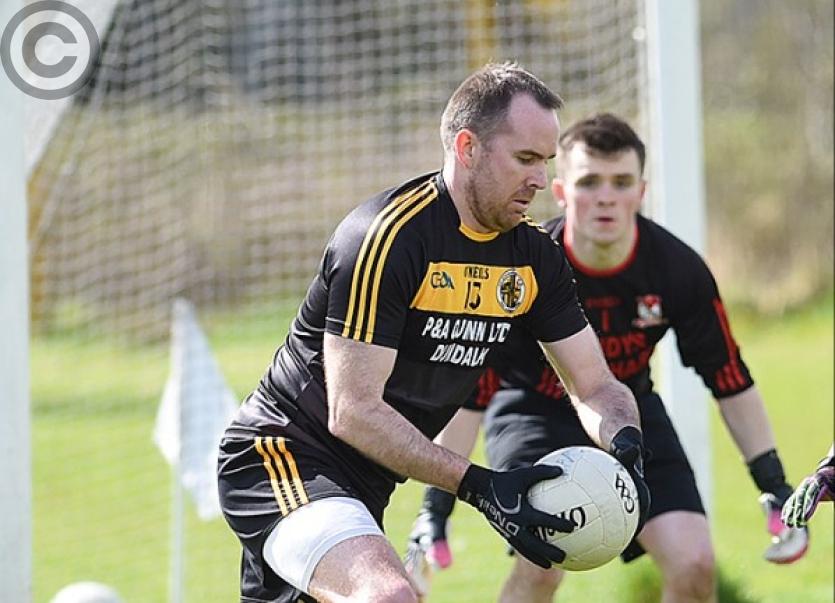 Na Piarsaigh had little difficulty in booking their place in the Kevin Mullen Shield semi-final when they brushed aside the challenge of Annaghminnon Rovers on the Rock Road on Tuesday evening.

All six goals came in a blistering second half display as the Dundalk side certainly made hay in the evening sunshine.

The hosts were in the groove from the opening exchanges and with Alan McCartney in fine scoring form, they led by 0-13 to 0-1 at the break.

Annaghminnon improved in an attacking sense in the second half as Dwayne Markey, James O’Connor and Rory Phelan were among those on target on the night.

Two first half goals from Gareth Kane helped John Mitchels advance to the last four of the Kevin Mullen Shield at the expense of Dowdallshill on Tuesday evening.

The game in Ballybailie proved to be an entertaining affair but it was the home side who deservedly came out on top having had the edge throughout.

Kane’s first half brace laid the foundations for victory as his side went in at the break with a healthy 2-7 to 0-6 advantage.

Dowdallshill battled to get back into the game after the restart and two goals from Noel Finnegan along with points from Cathal Sheridan gave them some hope. However, the Mitchels were always in control and a goal from Mikey Nulty sealed victory.

Glen Emmets eased into the semi-final of the Kevin Mullen Shield with a comfortable victory over Naomh Malachi at Cusack Park on Tuesday night.

The home side never looked in any danger from the opening whistle and had five points on the board before Tadhg Downey scored the opening goal on 15 minutes. Andrew Mooney added a second soon after as their side led by 2-6 to 0-2 at the interval.

James Butler added two early points in the second half before Kealan O’Neill found the net to put the game beyond any remaining doubt.

Butler scored the fourth goal of the game for the Emmets before Malachi's finished with a flourish as a point from David Begley was followed by a goal from a Ciaran Hughes penalty.

Wolfe Tones recorded an exciting quarter final win over Lannleire in Kevin Mullen Shield on Tuesday evening. Played in gorgeous weather, it was the Dunleer men who held the upper hand at the interval, leading six points to four, helped by a brace of points from Paul Callan and Alan Murphy.

The decisive moment of the match came three minutes into the second half when Rory Taaffe beat Liam Callan from close range for the game's only goal.

Play flowed from end to end throughout the second period with both sides guilty of missing numerous opportunities for scores.  But in the end it was the Tones defence who had stood firm and prevented Lannleire from registering a three-pointer which ensured the Drogheda men progressed to the last four.