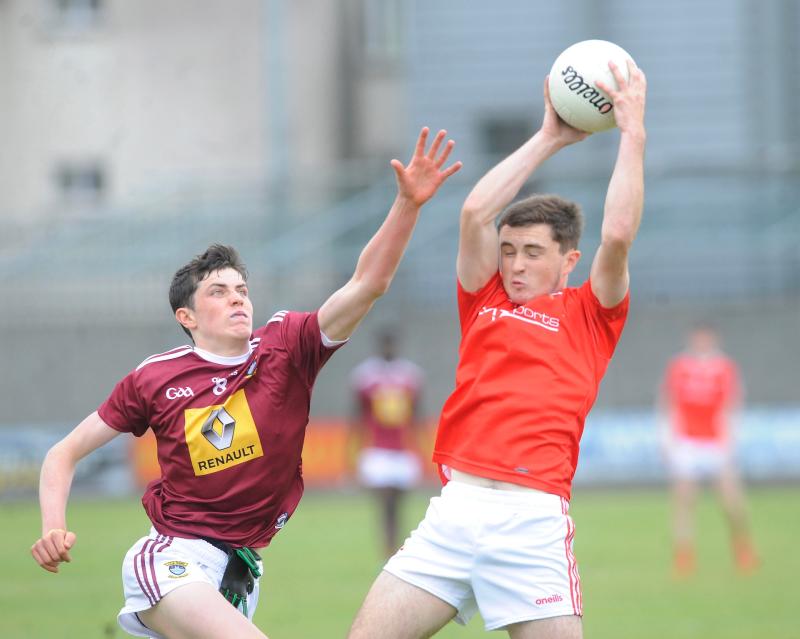 Undaunted by the away trip to Mullingar, the Louth minors came away with a convincing victory at Cusack Park on Saturday afternoon.

The pandemic has been tough for us all, but you could argue that our youngsters have felt it most and further down the line, they might well feel it’s impact further.

However in the present, this crop of minor footballers under the tutelage of Aaron Hoey showed that they might go on to greater things. The nine point win didn’t flatter them and there is plenty to work on still ahead of Laois in the quarter final in a fortnight’s time.

Despite the new surroundings, Louth settled much quicker into the most anticipated game in their world so far. A winning knockdown from the throw in put Louth on the front foot straightaway and Gerard Hanlon started and finished the attacking move with a wonderful opening point.

Monasterboice midfielder Dara McDonnell, buoyed by the positive start elegantly clipped a point over the bar shortly after Westmeath forward Brian Cooney found the range with a free.

Cooney, son of the current Westmeath senior manager was the Lake County’s most threatening player and kept his side in touch throughout with his industry and place taking.

After only four minutes Louth showed that they meant business on the day. A high ball from Hanlon into target man Domo Akin caused enough consternation that it broke to the on rushing Seán Reynolds, who popped a hand pass to Liam Flynn at the back post.

With time and little space, Flynn checked onto his left foot and finished low to the net. A ploy that resulted in the goal was no doubt something they worked hard on since they reconvened. The perfect start capped off with a ruthless major.

Cooney would reply but Westmeath struggled from open play as Louth funnelled men back. Adam Lambe nicked a nice point, before Shane Keenan scored his sides first point from play on the stroke of the first half water break.

Upon the resumption, Vinny Cox’s side's momentum maintained. Louth were sloppy with possession and were punished for those unforced errors coming out of the defence by Cooney again.

Just when it looked like Louth were going to derail themselves out of the contest, Kieran McArdle found the net on 21 minutes. Fionn Cummiskey picked up possession in open space on the wing and the Kilkerley man showed great composure to keep the ball until the pass was on.

A little hand pass over the top opened up the space for McArdle who drove through the gap and finished with a low strike past Senan O’Driscoll in the Westmeath goal. The goal was timely and provided Louth with such a boost that it effectively won them the game.

Flynn fired over a free and set up Akin for a point either side of Keenan’s second point. The two goals would separate the sides at half time, 2-5 to 0-5 in Louth’s favour.

The second half was a much scrappier affair, the fact two Flynn points from free’s were the only scores for the first 18 minutes of the half highlighted that.

Louth were completely dominant now and with Aaron Hoey’s instructions still ringing in their ears from half time, his side were much more sensible with the ball.

Cooney again replied with a free and Tang man Keenan landed his third score in a fine display just before the delayed water break. Surprisingly the referee didn’t stop the game until the 21st minute of the second period.

So with nine minutes on the clock and six points between the sides, Louth knew what to do and were able to carry that out to the letter of the law. Tracking men back, passing and moving, and showing great understanding in doing so.

While his teammates managed the clock, Mattock man Flynn managed the game, increasing the gap to eight with two more well taken free’s from his hands to make it to 2-9 to 0-7.

Keenan and impressive midfielder Rian Holding tagged on further points but Louth emphatically slammed the door shut in the 59th minute of the game.

Dangerous Cooley corner forward Gerard Hanlon bore down on goal and with supreme vision and wherewithal picked out Flynn at the back post for the simplest of tap in’s. Game over.

Louth captain Cameron Maher extended the lead to ten before his marker and Westmeath’s top scorer on the day, Cooney pulled one back with his fifth free of the game.

With parents and siblings and extended relations in the crowd, you could feel their overwhelming relief as the final whistle blew. They of all people know how hard the year has been for their sons.

The trip worthwhile, regardless of the result, but to see them win in red made it no doubt sweeter. They’ve another step-or three-to take yet, in their Leinster minor voyage. All roads now lead to a home fixture against Laois next weekend.