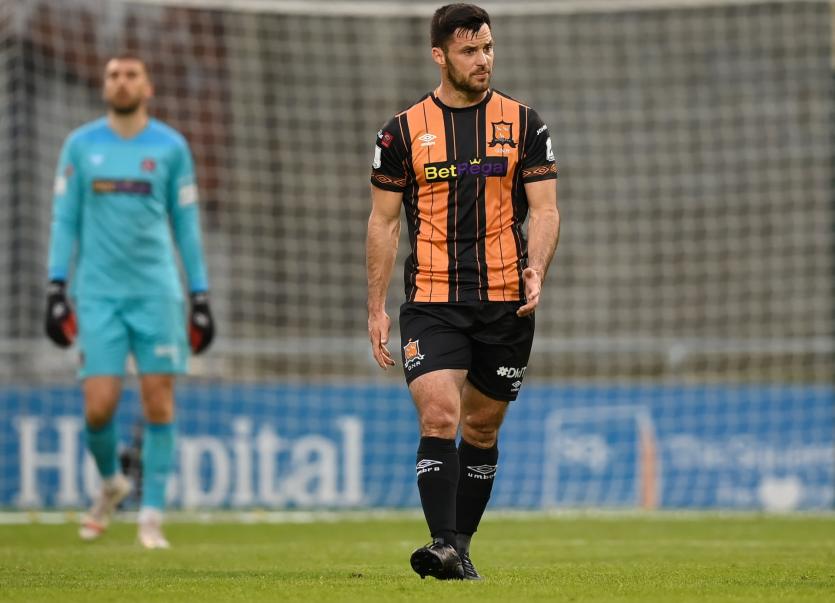 Vinny Perth tasted defeat for the first time in his second spell in charge of Dundalk FC on Friday night following a 3-1 defeat to Shamrock Rovers at Tallaght Stadium.

Things had started brightly for The Lilywhites, who raced into a first-half lead through Patrick Hoban, but goals before the break from Liam Scales and Sean Gannon had put Rovers in command, before Aaron Greene sealed the points 15 minutes from time.

Dundalk are now back down to seventh in the SSE Airtricity League table and six points behind fourth-place Bohemians, who beat St Patrick’s Athletic 3-2 on the same night.

Having returned from his productive loan spell at Derry City, Will Patching went straight into the Dundalk starting line-up. Sonni Nattestad and Greg Sloggett were also handed starts, as Vinny Perth made three changes from the previous week’s 2-1 win over Derry.

The hosts had the game’s first chance when the ball broke luckily for Rory Gaffney, but the Rovers forward saw his volleyed attempt go narrowly wide of Alessio Abibi’s post.

Making his debut for Rovers was former Dundalk favourite Richie Towell, who was enduring a frosty reception from those lucky enough to have acquired an away ticket.

Towell was having a difficult return to League of Ireland football and was at fault for Dundalk’s opener on 13 minutes after he was easily dispossessed by Michael Duffy, who cleverly played in Hoban, who then showed some tremendous composure to make it 1-0.

Rovers almost hit back with an immediate response when Gannon’s cross from the right was met by the unmarked Greene, but he guided his glancing header harmlessly wide.

Dundalk had what looked a stonewall penalty shout turned down shortly after that when Duffy was brought down inside the box by Scales, but referee Damien MacGraith wasn’t at all interested and instead awarded a free out, much to the absolute dismay of Perth.

It should have been 2-0 to the visitors when Raivis Jurkovskis sent in a peach of a cross from the right, but Hoban’s header and resulting rebound was saved by Alan Mannus.

Rovers started to push for an equaliser after that and Gaffney’s shot trickled inches wide after Nattestad – who only just passed fit – did brilliantly to block out the initial attempt.

Dundalk goalkeeper Abibi got down well to save from a Greene snapshot not long after that, but the Albanian stopper was powerless moments later as Rovers found a leveller.

That equaliser came on 37 minutes when Scales hit a superb goal from distance, giving Abibi virtually no chance, with the Tallaght faithful being sent into absolute raptures.

Nattestad headed wide from a Duffy corner five minutes before the break, but it was Rovers who took the lead in first-half stoppage-time when an attack broke to Gannon, who scored a goal-of-the-season contender to put The Hoops 2-1 in front at half-time.

The second half didn’t live up to the first in terms of entertainment, with Dundalk never looking likely to get back into the contest, with the bulk of the chances falling to Rovers.

Sean Hoare’s somewhat audacious volley from distance was never likely to trouble Abibi, but the Dundalk number one did have to save well from Greene not long after that.

From the resulting corner by Ronan Finn, a Roberto Lopes header across goal was met at the back post by Greene, but he just couldn’t turn his close-range effort on target.

That was a lucky escape for Dundalk, and Rovers had another chance through substitute Danny Mandroiu, who saw his rasping shot from distance go inches over the crossbar.

Rovers got their third on 75 minutes, however, when Greene managed to get the better of Andy Boyle before guiding it into the bottom corner to seal the points for themselves.