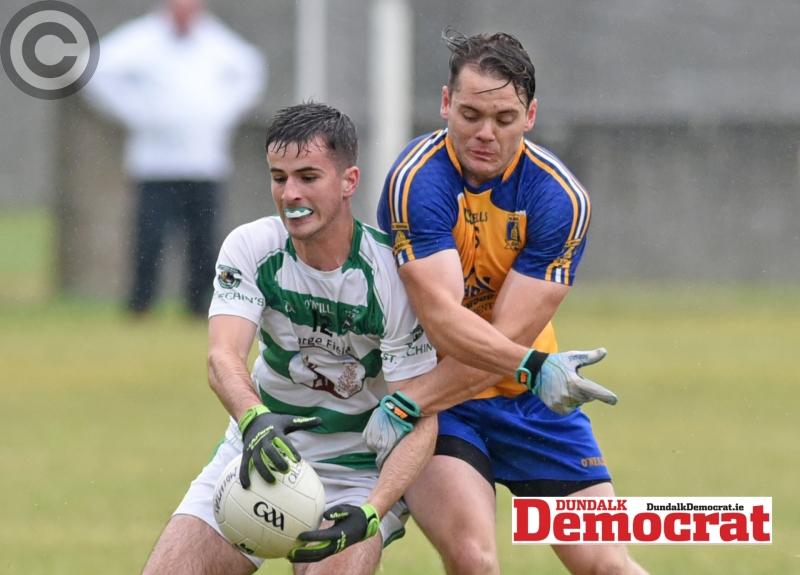 Senior football is the reward on offer for the victor of Sunday’s CTI Business Solutions IFC final at The Grove where St. Mochta’s and St. Fechin’s meet in a surprise pairing.

Louth Village is decked out in blue and yellow ahead of what is a momentous day for the club as both their first and U16 teams play in their respective championship finals. The juveniles, in alliance with St. Joseph’s, take on Cooley Kickhams in the curtain-raiser and are strongly fancied to claim the honours.

However, the main event is almost too close to call, even if Fechin’s will take to the field as favourites having accounted for Seamus McGahon’s men in both league and championship this season.

Fechin’s have the competition’s top-scorer, Ronan Holcroft, in sublime form, having played some of the finest football over the summer’s course. They are also underpinned by the pain of decider defeat in 2014, when they entered at a low price against O’Mahony’s.

They left it too late to find their groove that afternoon and their recovery has been drawn-out since. Indeed, they have largely underperformed in the championship, gaining a frail tag having been forced to fight the relegation play-offs in two of the last three campaigns.

It is possible that that baggage could weigh heavily on them again, whereas Mochta’s enter open-minded and without any final trauma.

A recent article carried in this paper with Peter Shevlin saw the Naomh Fionnbarra legend tip Fechin’s for the title. He alluded to the Eugene Judge factor and has to date been proven spot on, to the detriment of the Togher club, who fell to Sunday’s finalists at the semi-final stage having been on the victory course.

Indeed, Fechin’s gained a considerable amount of credibility for the way in which they rose to the ‘Barrs’ challenge, coming from behind, having lost an eight-point lead themselves, to advance, a feat Mochta’s are yet to manage in this year’s championship.

The Louth’ side have led for the majority of their successful ties and stood able to repel the advances of Hunterstown, St. Bride’s and especially Mattock Rangers late in games. The exception was in round one, when Fechin’s prevailed by five having been down at half-time.

Much has changed since that Páirc Clan na Gael encounter. Both teams have defied consensus in jumping all but the final hurdle, which is fast coming into focus, and deservedly so. Mochta’s have had the rockier road with two Division One opponents in the quarter- and semi-finals and that must be an advantage, regardless of Fechins’ impressiveness on their route.

The Byrnes will be key to Mochtas’ challenge. Declan’s scoring power and general influence is hardly matched by another player on one team in the county, while Ciarán, even his sight, could unnerve Fechin’s if and when introduced. He will present a element of the unknown.

Fechin’s will be well versed and have a sturdy defence with full-back Niall McCabe one Louth manager Wayne Kierans will surely be taking a look at.

Logic points to a Fechin’s win, but, for what some will consider to be romantic reasons, Mochta’s could be in line for a double.