Pints, marriage and an IFC final date with St. Fechin's - St. Mochtas' Eamon O'Neill is primed for the week of his life 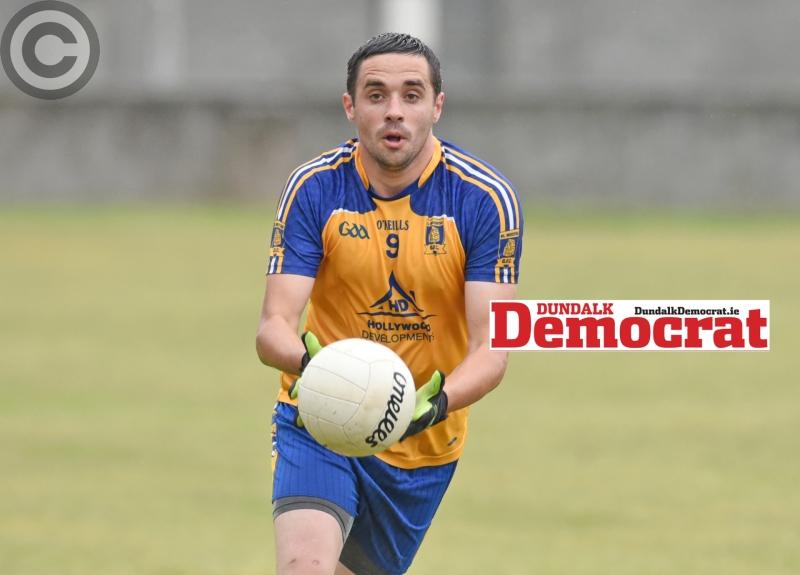 St. Mochtas' Eamon O'Neill is playing in the IFC final on Sunday and getting married next Saturday. (Pic: Ciarán Culligan)

St. Mochta’s midfielder Eamon O’Neill is getting married on Saturday week and Seamus Flood is on the provisional guest list.

Indeed, O’Neill is hoping that on the day he ties the knot with partner Sineád, the trophy Mochta’s last claimed in 1981 will have pride of place at the top table, dressed in blue and yellow.

The Louth Village side have defied all odds in reaching this stage, having recovered from a round one loss to Sunday’s opponents, St. Fechin’s, to progress to the knockout stages where Division One opposition, in St. Bride’s and Mattock Rangers, were swatted away.

Belief, he feels, has been key to their upturn in semi-final fortune. Since returning to the middle grade in 2009, they have lost two intermediate semi-finals and several quarters’.

“The biggest problem we had when we got to the knockout stages was belief that we could go all the way,” O’Neill says.

“We went up to the O’Raghallaigh’s in the league missing probably our two best players in Philip Englishby and Declan Byrne and we still won. We only had 18 players that night.

“It gave us the belief, Fechin’s are the only team to beat us in the last seven to eight games.”

Their team spirit has been tested, especially in the closing stages of the recent victory over Mattock in Ardee, where it took a lung-busting run and point from O’Neill - better known as an inside-forward until manager Seamus McGahon “took a gamble” this season - to seal a 1-10 to 0-11 win.

The upset sparked scenes of celebration, both at Páirc Mhuire and in Louth’ later that evening, especially in Eamo’s Bar, which O’Neill runs. Success, he says, is “good for business”.

“Eamo’s is going well because the football is going well. It’s great. As long as the Mochta’s win I’m a happy man,” he chuckles.
And, like any local publican could sense, excitement levels are in overdrive at the prospect of a return to senior football.

“The Mochta’s boys, I don’t know what it is about them at the moment, every single one of them is just football mad. When you’re winning, there is a buzz about the place, everyone wants to go to footballs and be together.

“We won the junior nine years ago and it was great, but it’s 37 years since our club last won an intermediate championship. The buzz and excitement that being in the final is bringing back to the older people of the parish is incredible.

“We have committee members that have been on the committee 37 years and they can’t believe how exciting it is to be back in an intermediate final. They do all the hard work and it’s great to reward them in some way.”

Mochta’s “fancy their chances” ahead of the Grove clash, but, having lost to Fechin’s twice this year, know there is a stiff task at hand. Nonetheless, Eamo’s has a few staff members on standby in case there is an influx of joyous patrons on Sunday night.

For O’Neill, the week of his life is set to unfold.