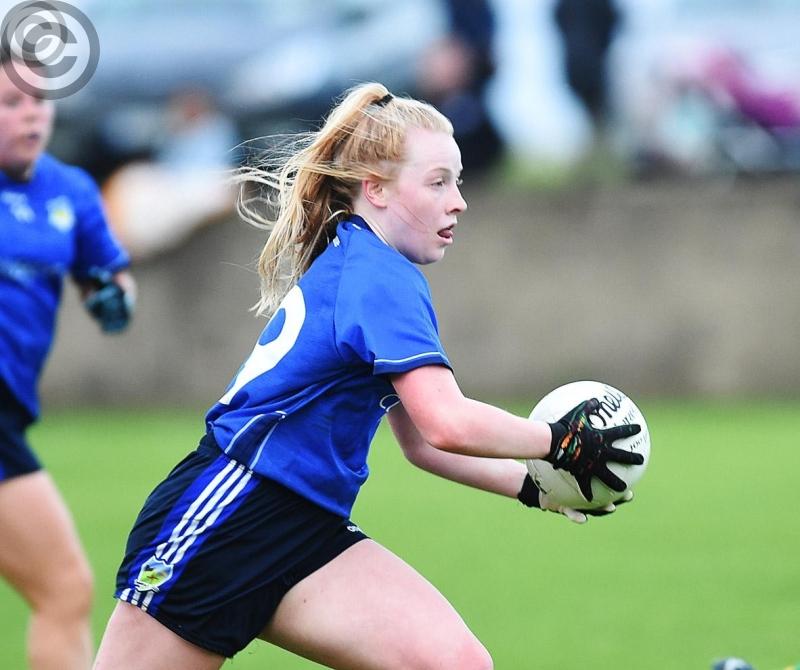 Seona Halligan and Roche Emmets will be hoping to go one better than last year when they lost the Division Two league final against St. Patrick's. (Pic: Arthur Kinahan)

CLAN NA GAEL
The Ecco Road charges will have a Division Two title challenge on their minds. Alannah and Shannen McLaughlin are on the county panel, along with Emily Norton, while Ciara Woods is a potent attacking threat. Fell short at the decisive end of last season. Have strengthened with Pamela Campbell and ex-Dublin star Denise McKenna arriving.

NAOMH FIONNBARRA
Former Louth goalkeeper Stuart Reynolds remains involved with Naomh Fionnbarra, whose hopes of success were ended at the semi-final stage in 2019. All-Ireland winner Deirbhile Osborne is a significant absentee, although the Togher ladies have plenty of attacking talent.

DREADNOTS
The Clogherhead girls will quietly fancy their chances of faring well in a competitive division where there is little to separate many of the teams. Enjoyed a good championship run in 2018 and if they can find that spark once more, they may challenge for a place in the league’s latter stages.

KILKERLEY EMMETS
Ella McEnteggart, Ciara Lennon and Caragh Brady are just three of the Division Three winners’ exciting youngsters who will hope to soften the blow of Sinead Woods’ departure for Australia. Jade McKeown and Fiona and Claire Lennon will provide a solid foundation.

ROCHE EMMETS
Runner-up in both the Division Two and Subsidiary League finals in 2019, Roche are under new management with former Louth star Gerry Curren taking the reins. In the Halligan sisters, Louise Byrne and Niamh Callan they have some class players and will start the campaign among the favourites for second tier glory, having also reached last season’s SFC last four.

ST. KEVIN’S/HUNTERSTOWN ROVERS
The Mid-Louth combination has the talent to challenge for honours this season with Susan Byrne, Paula Murray, Abbie Sheridan and Roisin Maguire providing firepower. Manager David Fedigan has much to be optimistic about.

GLYDE RANGERS
Glyde Rangers will be looking for an improvement on last season as they set about their Division Two campaign. County star Michelle McMahon will be crucial to their cause, while Alanna Conlon could also play a starring role in any Tallanstown success.

NAOMH MÁIRTÍN/GLEN EMMETS
The combination struggled towards the back-end of last season, but with many Louth underage players coming through in both clubs, the future looks brighter. Rachel Leonard and Aoife Russell, the current Wee County star, are two match-winners for a side that will be hopeful of competing, especially in their opener against  Kevin’s/Hunterstown.