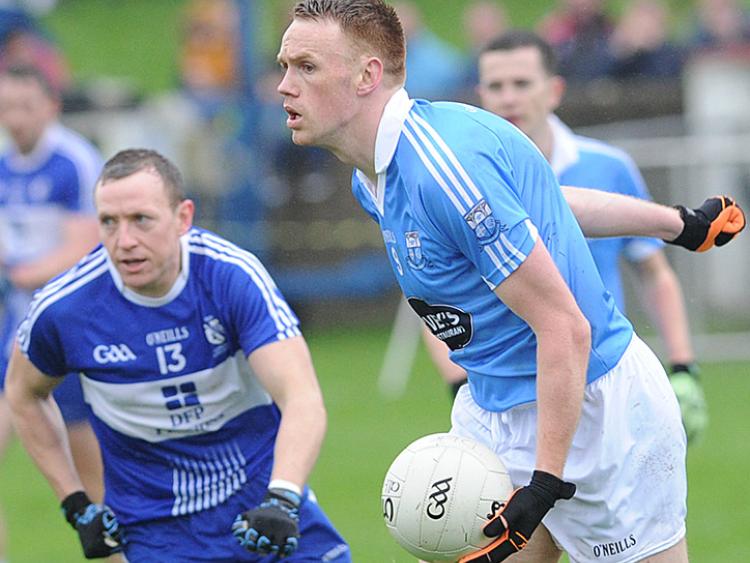 Thankfully, John Kermode was a voice of reason amid what, otherwise, was needless noise. “It says a lot about a team if they are forfeiting games,” the rangy No9 wrote. (Pic: Arthur Kinahan)

Newtown Blues are the aristocratic heavyweight of Louth GAA, as their record of 23 senior championship and 12 Cardinal O’Donnell Cup titles suggests.

There are a multitude of reasons why they have won Joe Ward on more than double the amount of occasions their closest challengers in the roll of honour, Ardee St. Mary’s and Dundalk Young Irelands, with 11 each, have. Tradition, of course, is chief among them.

But they, as with serial victors across the various codes, are like a dog that’s developed a taste for blood. Winning is all that satisfies and even at that, focus swiftly turns to the next prize.

Social media was its typically contrary best last week when Louth GAA announced its altered format for when play resumes in August. It involves an equal divide of Divisions One and Two into a pair of six-team tiers, guaranteeing every outfit five league games. The top two on each side will meet in the divisional final.

The sticking point, though, is the absence of promotion and relegation, a point which was both inevitable and sensible given the reduced programme and the short-length of preference the club game has over its monstrous inter-county cousin.

Furthermore, anybody who contends that mobility at both the top and bottom of one-rounded, six team leagues, where three-fifths of the matches will be, in effect, star games, is a logical manner in which to complete the season ought to examine the possibility further. It would be completely ludicrous.

And you need look no further than the North-East soccer league, which has also done away with the promotion/demotion format in its tiers. Both associations can’t have got the answer to the same sum wrong.

But back to Blues, and their five-time senior championship winner, John Kermode, more specifically. Some saw it fit to claim that clubs would concede fixtures, which are, they suggest, meaningless, post their championship exit. It was even said that there may be mass walkovers.

Now, anybody who has any self-respect or even a slight interest in playing Gaelic football wouldn’t let themselves or their club down in such a dreadful manner, surely? After months of sitting at home, twiddling thumbs, willing time to pass and complaining about having no sport to either play or watch, deciding to opt out on the basis that your team can’t be relegated after five games is about as nonsensical as the Americans re-electing Donald Trump.

Thankfully, Kermode was a voice of reason amid what, otherwise, was needless noise. “It says a lot about a team if they are forfeiting games,” the rangy No9 wrote in reply to an opponent almost endorsing teams pulling out.

It got me thinking about a conversation I had with a well-known Joe’s man a few years back. “Young fellas don’t want to play football any more,” he argued, tutting. By ‘young fellas’ he meant those in their 20s who were following the generation he was a part of. And on the basis of many players’ retort in relation to the altered system, the commentator in question seems to have smashed the nailhead with a block hammer.

These league matches have significance, ultimately; there’s a trophy at stake, which, for everyone, ought to be a luring force in itself. But more importantly, it’s a chance to play a sport we’re all supposed to love after a lull, a depressing spell lurking in the realms of the unknown.

Or maybe we should just digest the negativity and look towards next year, sitting bored until then, thus getting out of Blues’ path to 2020 glory. Then again, they’ll probably win it all anyway.