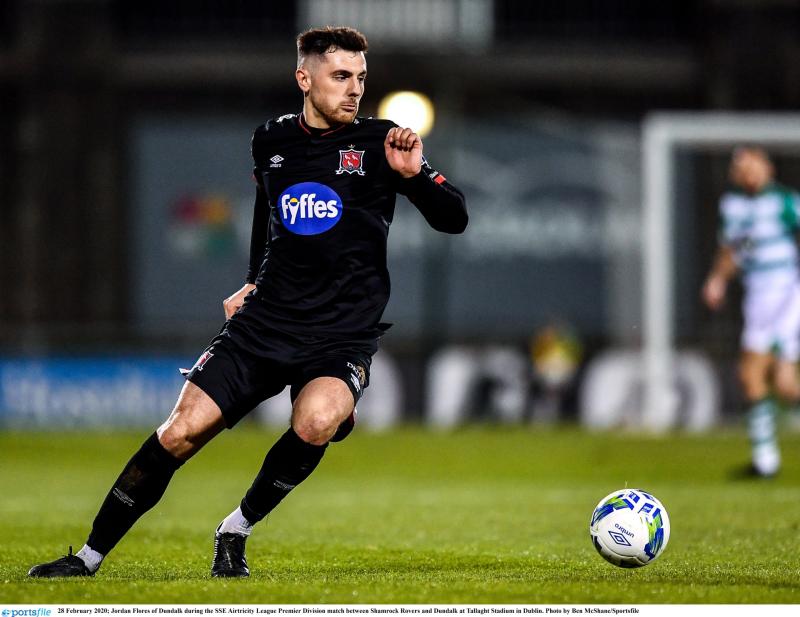 The goal Wigan-born Flores (24) scored for Dundalk at Tallaght Stadium has been hailed throughout the sporting world. (Pic: Sportsfile)

Jordan Flores and Michael Smith were born in towns less than 10 miles apart. There’s five years in their age difference. In less than 24 hours last week, both brought thousands – millions, in Flores’ case – to their feet.

The goal Wigan-born Flores (24) scored for Dundalk at Tallaght Stadium has been hailed throughout the sporting world. It was caught by RTÉ, and on Saturday night’s News, the national broadcaster said it had since been seen by over five million.

Stephanie Roche was pipped for a Ballon d’Or award a few years ago – Jordan could have better luck, and it mightn’t matter if Deeney, Feeney, Messi and Mo are also in the running.

There was a crowd of 9,000 at Dublin’s 3 Arena the night before Flores swung that left foot of his for a round of the televised Premier League Darts League. According to sport’s most flamboyant of Masters of Ceremonies, John McDonald, millions “throughout the worrrrrrrrrld” were looking in.

Michael Smith, born in St. Helen’s 29 years ago, was paired with Derry’s Daryl Gurney, and as their match trundled along, each set going to throw, few of what the pint-swillers had hoped for but hardly anticipated was about to happen.

Yes. First a treble 20, then a treble 19. If the crowd, the vast majority needing the giant screens to let them know what was happening up on the stage, didn’t go into orbit when Smith then hit a double 12, it was because the cameraman missed the dart hitting the outer ring.