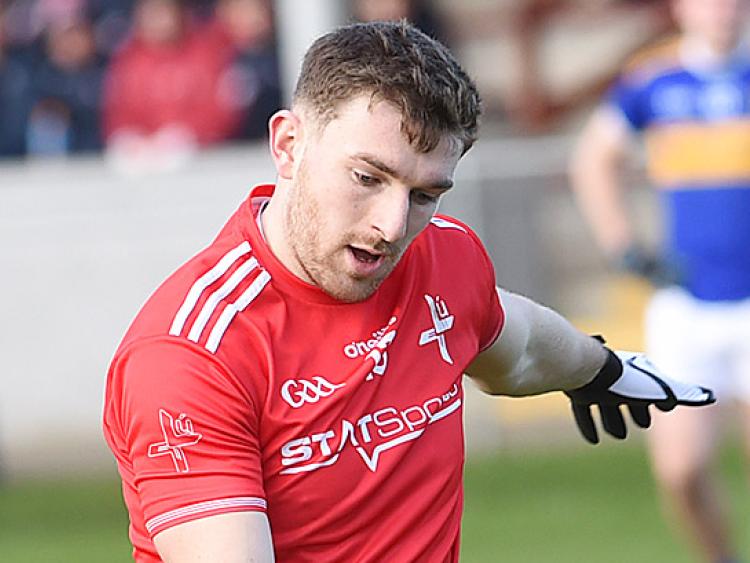 Louth are considering whether to appeal Sam Mulroy’s suspension for his dismissal in Sunday’s National League defeat by Offaly.

The Naomh Máirtín forward was shown a red card by referee Paul Falloon following an incident which left Faithful midfielder Michael Brazil in a heap shortly before the finish at a damp Gaelic Grounds.

Mulroy was mystified at the whistler’s decision to pick him out solely from a heated exchange, with his manager, Wayne Kierans, confirming afterwards that footage of the clash will be examined in a bid to free Mulroy for this weekend’s visit to Derry.

“I saw the incident and I wouldn’t have a problem with anything Sam did; it wasn’t a red card,” Kierans told The Democrat.

“The referee, fair play to him, he tried to explain to me after the game what it was for, but it certainly wasn’t for a striking offence. It’s something we might look at on the video.”

Tommy Durnin was also given his marching orders for a subsequent collision, which the official deemed to be worthy of a second yellow, as frustration mounted in the home camp.

However, in spite of indiscipline being a trend throughout the early part of last season’s National League, Kierans defended his players and was instead more interested in looking towards Sunday’s critical venture to Foyleside.

“We need to get points on the board, we’re obviously not in a good position, we’ve zero points after three games. We have to recover and make sure we get a performance and two points against Derry.

“We just need to put the 70 minutes together. There were good parts of play against Tipperary, but we finished poorly. Today, we started poorly, but finished relatively ok. It’s about getting it all together and cutting those individual mistakes out. That’s difficult because it comes into the mentality and confidence of the players.

“We won’t be shouting or screaming at anyone, we’re sticking together. We can improve and we will improve. There is no point in hiding now. We’re in a difficult position, but we just have to recover and make sure we put it all together in Derry.”