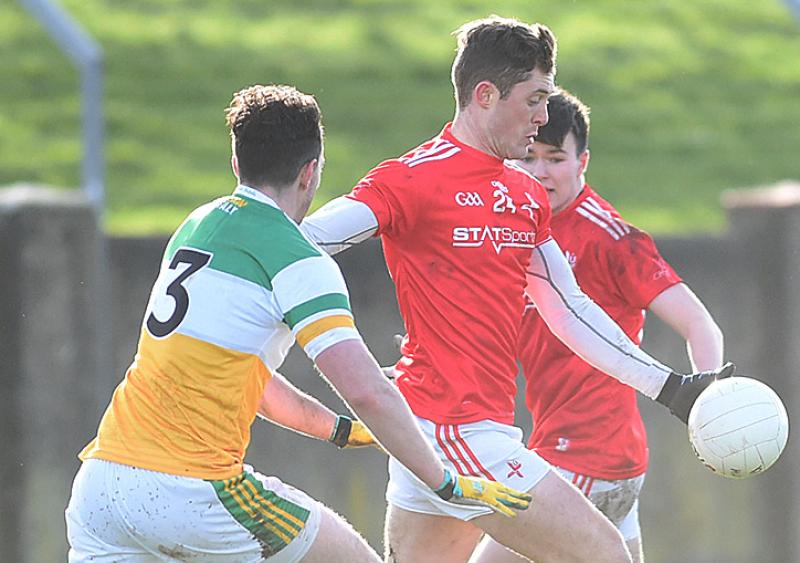 Offaly’s players are well-used to bogs and so they put their greater nous of the conditions into practice by winning Sunday’s relegation four-pointer in mucky Drogheda.

Albeit a whirlwind surge during the second half saw Louth reduce their deficit from 12 points to the minimum, The Faithful were worthy winners of a game which only truly became a contest upon Declan Byrne’s introduction.

The St. Mochta’s clubman kicked two points in quick succession shortly after entering the fray, letting go a rallying cry following his latter effort. And his team-mates responded with a wonderful sequence of interchanges between Sam Mulroy and the excellent Paul Mathews resulting in the former rocketing a shot to the back of the net.

A subsequent run of seven points to only a solitary reply had the gust in the hosts’ sail amid the closing stages, when a rained delivery found Byrne, whose nimble feet, incredible vision and slick execution set-up the inrushing Conor Grimes to bundle the ball across the line.

All of a sudden there was belief in the air, a sense of deja vu in The Reds’ favour two weeks after the late implosion against Tipperary. But Offaly remained the cleverer and through their ability to retain possession much more competently, bought themselves territory from which they posted a closing pair of points, deflating Louth’s buoyancy like a needle-head popping a balloon.

Winless and pointless after three matches, two of which they hosted, is a depressing record and points only in the direction of the dreaded drop. And what’s more, self-harm is fast becoming an unwanted trait of this Louth team, with every mistake, it appears, being punished ruthlessly.

“If any team gives the ball away in any division at this level you’re asking for trouble,” manager Wayne Kierans admitted. “You might get away with it at club level…

“It’s an issue and we’ve spoken about the stats and how many possessions we lost against Tipperary. Today, there were a couple that we gave away as well and you’re just handing the opposition easy scores.” 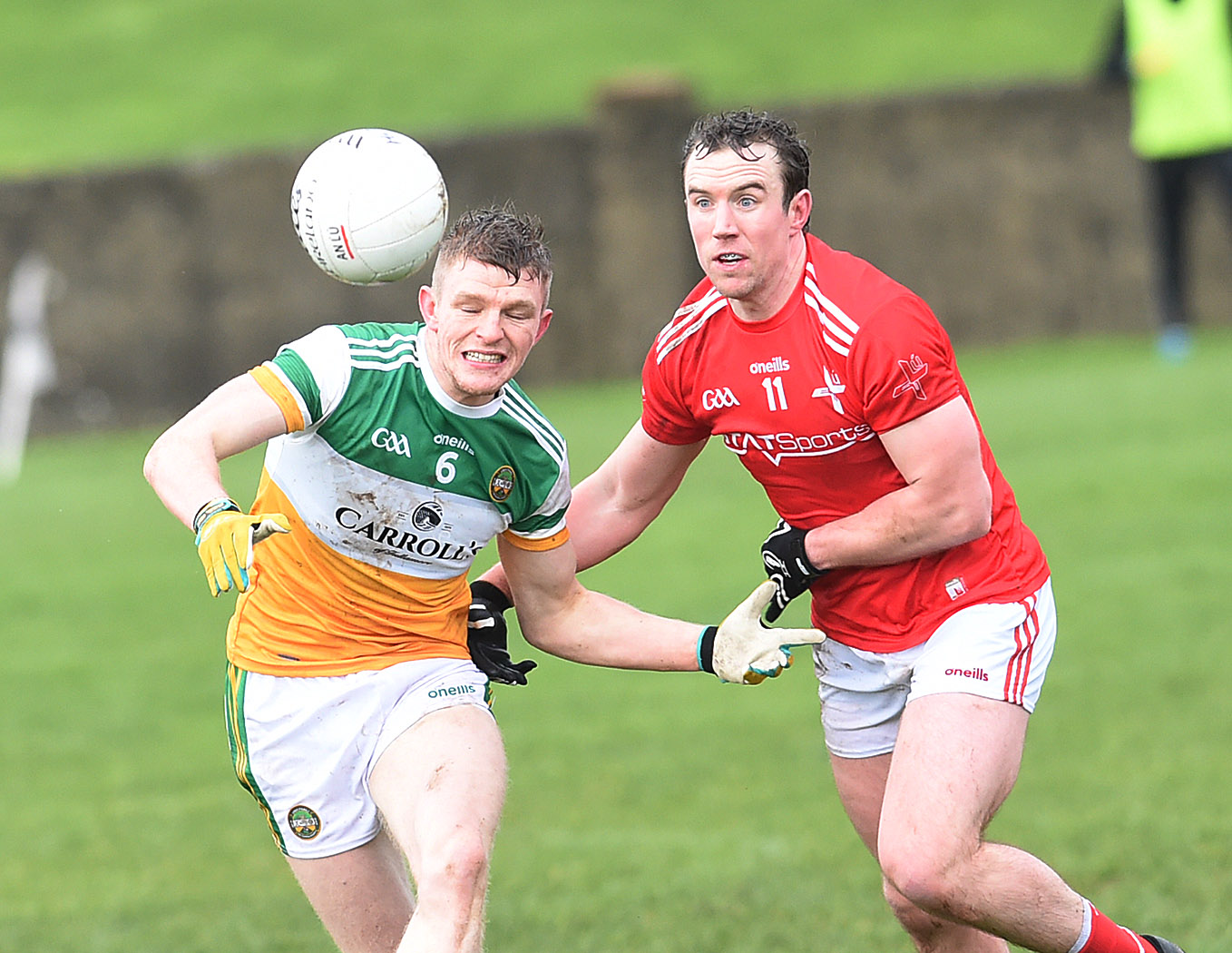 Two goals, in fact, with John Clutterbuck and Bevan Duffy, who was hauled off after 23 minutes, the guilty conceders of balls which, via Anton Sullivan and Ruairí McNamee, found their way past Craig Lynch.

“When we did come out in the second half, we missed three chances and they would have given us the momentum much earlier in the half,” Kierans added.

“We kept saying at half-time that we’ve 40 minutes to turn this around and we got back to a point, with some good, considered play and well-worked goals, but we made bad decisions; it’s that ‘composure’ word again.”

OVER BEFORE IT STARTED
Eighteen minutes it took for The Wee County to get off the mark, by which time lethal Offaly had struck 2-4 as the home defenders failed to catch even a glimpse of their men’s shadows.

Liam Jackson and Duffy points at least gave Louth a launchpad, but three of the opening period’s final four registers went the way of John Maughan’s Midlanders. Ultimately, attempting to overturn a 2-7 to 0-3 interval deficit, in spite of the favouring gale blowing towards the hospital end after half-time, was comparable to asking a 10-tonne Tessie to run a marathon...

… In record time after the visitors grew the gap to 12 shortly after play got back underway.

The game was gone in the eyes of many. Yet Kierans didn’t think so, and he was almost correct. 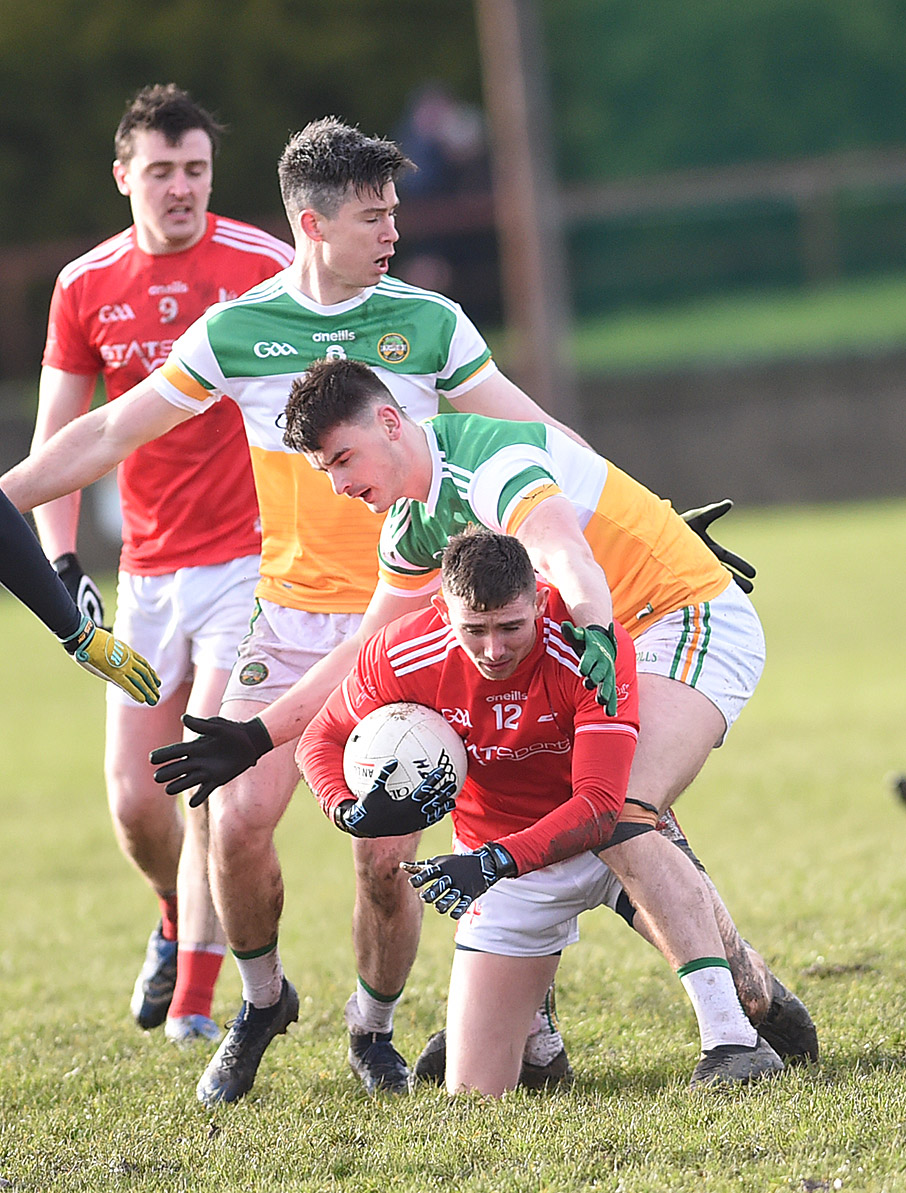 “It wasn’t in those conditions, because I saw it last year when we were down against Offaly and turned it around, I think we were eight down at half-time then.

“Twelve down is not the position you want to be in, but all it needed was the goals and we got two, and were very unlucky not to get another one, their ’keeper made some brilliant saves.

“Credit to the boys in the second half, I honestly thought when we had them down to a point that we could get something out of the game, but, unfortunately, then we made a few bad decisions. Overall, we just didn’t do enough.”

BYRNE BLITZ
Nine was the difference when Byrne took Louth by the collar and began to hurdle whatever Offaly could hurl their way. He was making aimless hoofs in his direction look like ideal deliveries and with the gap shaved to six, Mulroy and Eoghan Callaghan tapped over before Byrne added his fourth point in less than 20 minutes.

But his moment of magic was still to arrive and after he supplied a stumbling Grimes with the chance to rekindle a faltering survival bid, the odds collapsed on a famous Louth victory.

“Deckie has the scoring power, so it was always the plan to get him on in the second half with the wind.”

It wasn’t to be, though. A statement which is becoming more recurrent with every passing week. The Reds are wedged in a sling hanging on the edge.