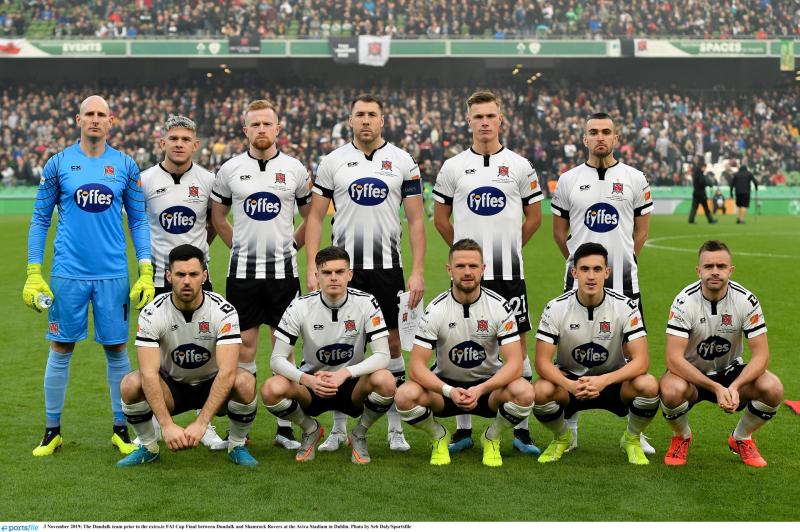 Dundalk FC’s domination of League of Ireland football has been immense – never before has there been anything like it. (Pic: Sportsfile)

It began as the first half of the decade drew to a close, and five years on is going stronger than ever. Dundalk FC’s domination of League of Ireland football has been immense – never before has there been anything like it. And, as we prepare to welcome the 2020s, it’s reasonable to think it’s going to continue, making the picture at Oriel Park look much brighter than it was at the birth of the 2010s.

Five league titles, two Cups and a number of subsidiary competitions have come to Oriel, and along with that there have been heroics on the European stage, one season yielding 12 outings, a joint-record for an Irish team.

And then there were the near misses. Along with the Cup wins there were three defeats in the final round, two in penalty shoot-outs, and another – the most recent – after 120 minutes’ play. Had last November’s showdown with Shamrock Rovers gone the other way, Derry City’s treble feat of 1989 would have been emulated. 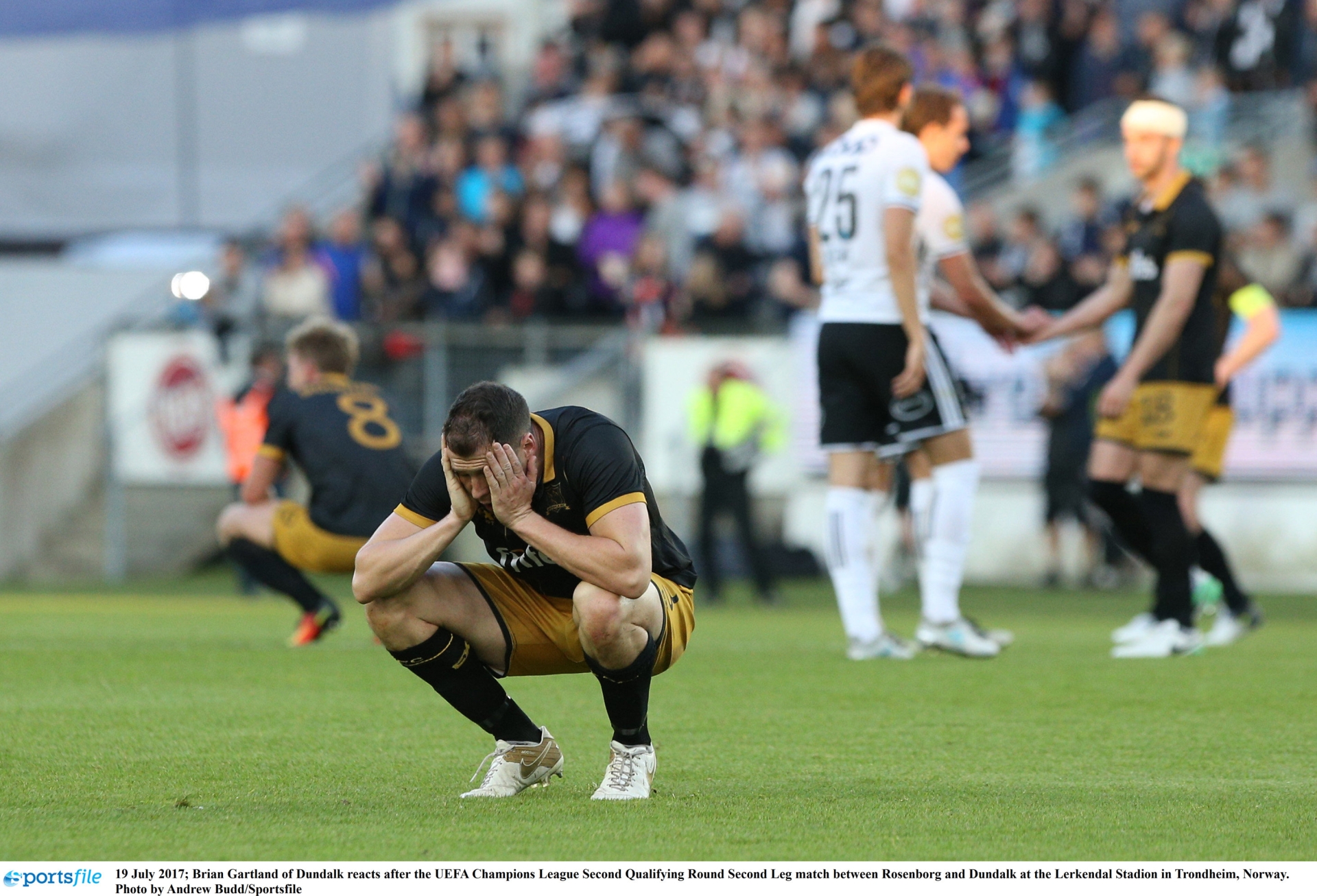 Almost three years ago, dreams of another Celtic visit to these shores were alive. There was that famous one in Oriel in 1979, and had Norway’s Rosenborg been overcome in the 2017 Champions League, the then-Celtic manager, Brendan Rodgers, would have walked in the shoes worn by Billy McNeill all those years ago.

Stephen Kenny masterminded the vast majority of those black-and-white successes before handing over sideline duties to another Dub. Vinny Perth is doing just fine, his first season in charge earning him a number of accolades.

Another team whose form is showing no sign of slacking off is the one formed by Eve McCrystal and Katie-George Dunlevy. Paralympic and World Gold has come this cycling duo’s way in the decade almost ended, and recent results suggest there’s more to come.

Let’s take a look at the Inside Track pages from the second half of the past decade. 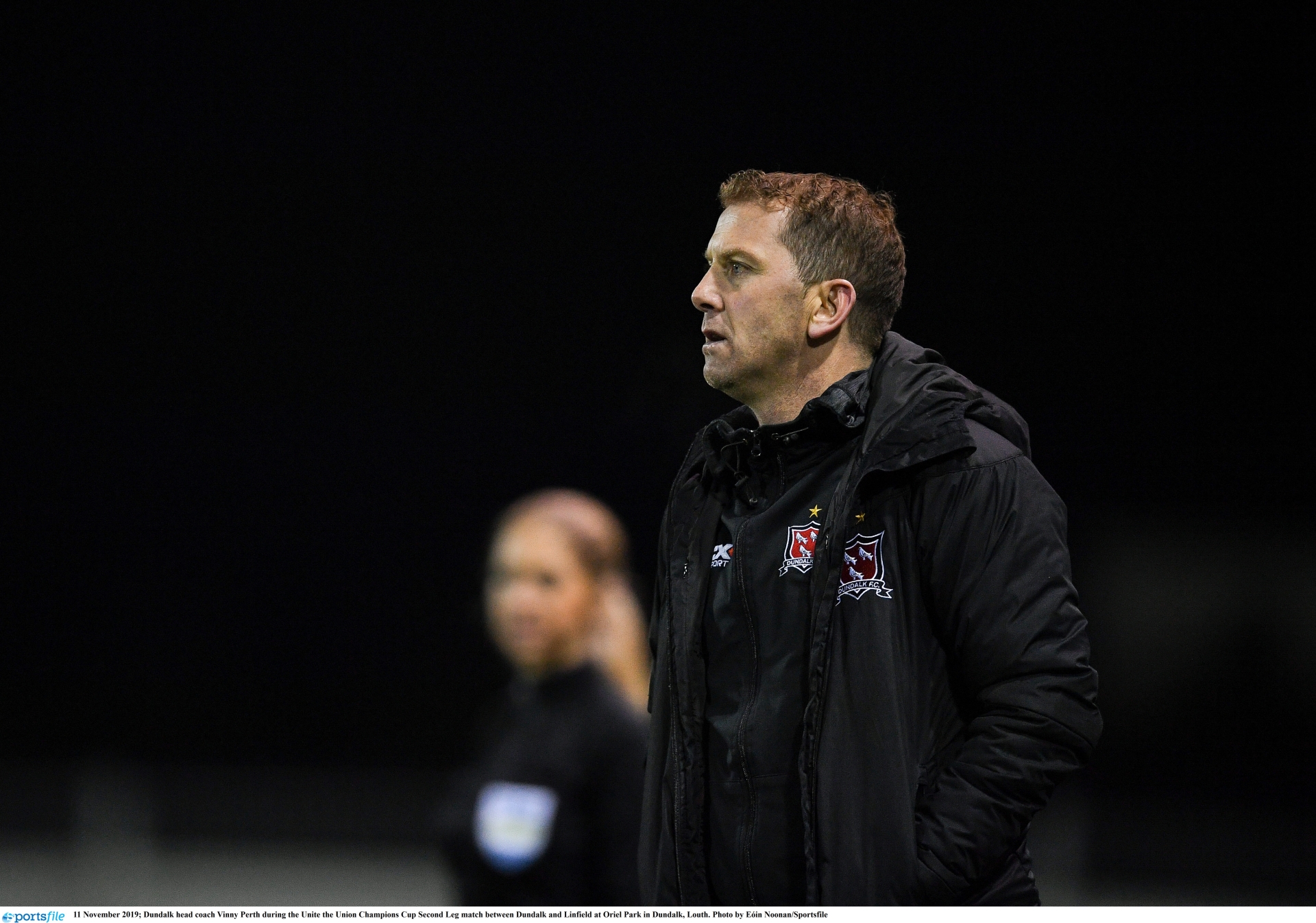 2015
One week in October has everything coming up green. The Ireland rugby team routs France to qualify for the World Cup quarter-finals, taking place in Britain, and the soccer team scores a significant win to advance European Championship prospects.

The defeat of world champions, Germany, is arguably the best so far in Martin O’Neill’s reign as manager. It’s enough to earn a place in the play-offs, and it’s good here as well, the Republic – along with the other Ireland team – set to play in France next summer.

Aidan O’Brien’s Minding wins at Newmarket on Friday afternoon, and the Tipperary trainer then channel-hops to be at Dundalk for another meeting that night. He’s back at the British headquarters the following afternoon, and here again he’s successful, scoring this time with Air Force One.

The heavy defeat of France is not a sign of better things to come for Joe Schmidt’s warriors; Argentina end hopes of a first-ever World Cup semi-final appearance.

- The big double for Dundalk. The league win comes in the easiest of fashions – they have 11 points to spare – and Cork City are beaten in the Cup final

- All-Ireland footballer, Frank Lynch, gets a great run at Dundalk with his Meath-trained racehorse, Political Policy. Six wins in a short time makes PP one of the country’s most consistent 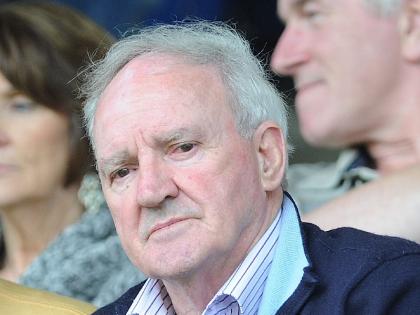 2016
Of the eight teams still standing in the Louth senior football championship as the quarter-finals approach, half are seeking a first-ever title win, while it’s years since two of the others triumphed. Not among the eight are St. Patrick’s. The holders and seven-time winners in 13 years, got turned over by Kilkerley in the qualifiers.

O’Mahony’s, one of the non-winning quartet, have a difficult match coming up, taking on Geraldines. They win this game, and their next one, against Gaels. They’re set to play St. Mary’s in the final.

Mary’s aim to close a 21-year gap, and are looking good as the final reaches its conclusion. But O’Mahony’s have yet to play their trump card. The towering Conor Crawley has a height advantage on the St. Mary’s full-back and uses it to knock a ball to the net – O’Mahony’s have the Joe Ward Cup for the first time.

- Dundalk’s European journey, which began in July and goes all the way to early December, running parallel for a good part of it with domestic affairs, ends with an away 2-1 loss to Maccabi. Defeats in the 12-match campaign, which incorporated the Champions and Europa Leagues, are never by any more than a goal. Stephen Kenny is named Philips Sports Manager of the Year, leaving the likes of Jim Gavin, Willie Mullins, Joe Schmidt and Martin O’Neill in his wake

- Leicester City pull off a 5,000/1 shock, winning the Premier League. Jamie Vardy’s good up front and Riyad Mahrez is a midfield maestro

- Mayo take Dublin to an All-Ireland football final replay, but that’s as good as it gets. By now the Dub machine is gathering momentum 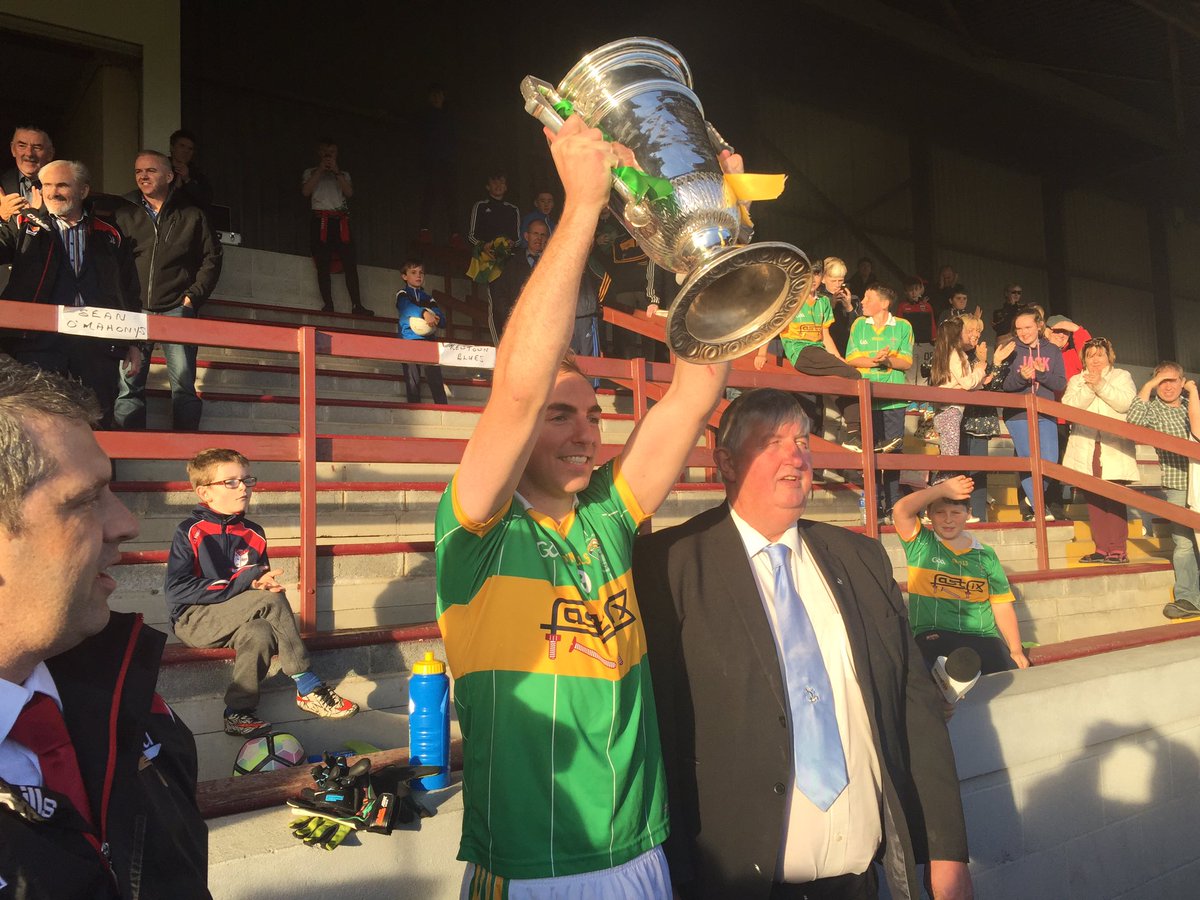 2017
Pedal-power wins Eve McCrystal and Katie-George Dunlevy two Golds at the Para-cycling Road World Championships, and almost gets them The Irish Times Sportswoman of the Year award.

Partially-sighted Katie- George and Eve, who maintains the Cooley Peninsula’s rich tradition of producing outstanding sportspeople, competed in South Africa, and showing no loss of form since taking Gold and Silver at the at last year’s Paralympics Games in Rio de Janeiro, add to their fine reputation.

The IT award goes to racehorse trainer, Jessica Harrington.

- Louth senior footballers win National League promotion, and the minors also make a show, giving the county representation in a Leinster final for the first time in 46 years. Dublin are too good for the U18s

- Organised horse racing comes to Bellurgan – the Louth Hunt point-to-point meeting is held on a course overlooked by Tipping’s Wood. The sport is good, and some smart performers are on show

- Colin Kelly stands down as Louth county team manager, and is replaced by Pete McGrath

- It’s a decade since the first all-weather meeting was run at Dundalk Stadium, and there are celebrations to mark the occasion

- England win the big St. Patrick’s weekend match at The Aviva and are crowned champions for the second year running 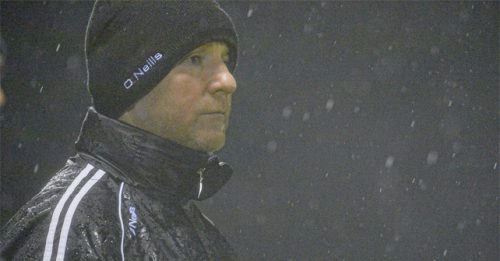 2018
The year begins with Ireland disposing of all opposition to win rugby’s coveted Grand Slam. The Six Nations title is in the bag before the final match with England at Twickenham. A 24-15 win here makes the campaign a complete success. There’s more to come – a first-ever Dublin win over the All Blacks in the Autumn series.

In between, Dundalk are once again supreme in the league, taking the title for the fourth time in five years. And just for good measure, the Lilies add the Cup, a 2-1 win over arch-rivals, Cork City, in the final enough to do the trick.

There’s a surprise to come. Stephen Kenny leaves Oriel after accepting the offer to become Ireland U21 manager with the promise of succeeding Mick McCarthy as senior team boss when Ireland’s European Championship run is over.

- Pete McGrath stands down as Louth senior team manager after a winless league campaign and a championship run that yields just one victory – against London. Former minor team boss, Wayne Kierans, takes over

- A site has been purchased off Dundalk’s Inner-Relief Road, and so begins the drive to give Louth a county grounds worthy of the name

- France win the World Cup, beating Croatia in the final. England reach the semi-finals, and are then beaten by Belgium for third place

- Paddy Clarke, former Louth senior team manager, dies after a lengthy illness. Also had charge of championship-winning teams in a number of counties and was on the line with the Ireland team for Compromise Rules matches 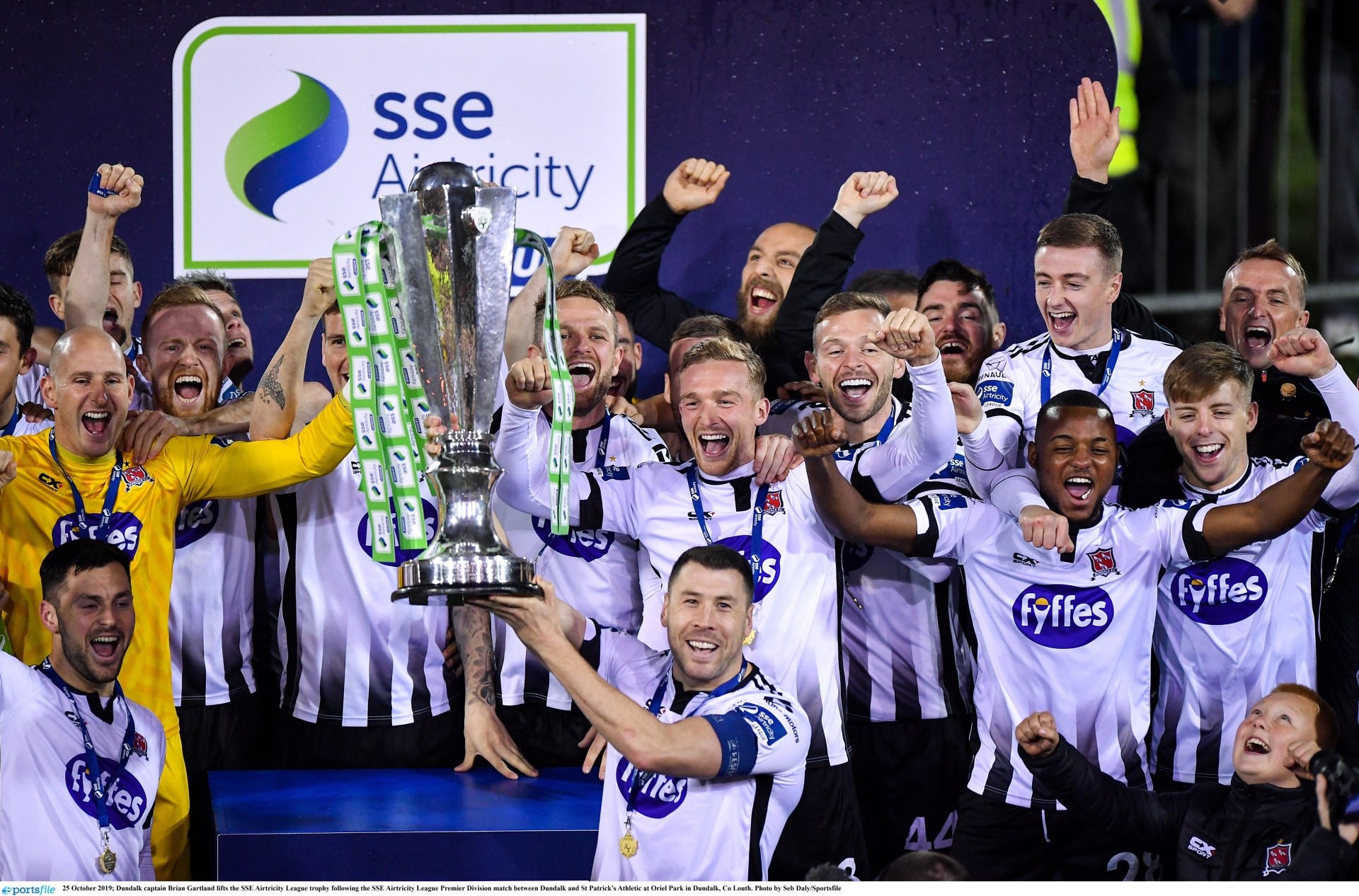 2019
The team of the decade almost makes a clean sweep. There are five trophies up to be aimed at and Dundalk FC collect four of them. Vinny Perth is the new, under-pressure manager, and it’s not looking good for him in the early stages of the premier competition, his side trailing Shamrock Rovers by 13 points, albeit with two games in hand.

There’s still a draught at the top of the table after the last series of matches, but it’s the Lilies who are in front. At one stage it looked as if the dividing margin would be a record.

Victory in the Cup final, Dundalk making a fifth successive appearance at this stage, would complete the five-timer, but Rovers exact some revenge, prevailing on spot-kicks.

The newly-introduced Unite the Union two-leg competition, bringing Dundalk and Linfield together, has some reminders of an infamous night, 40 years ago. Nothing is done to advance  the cause of an all-island league.

- If Dundalk are worthy winners of the local team of the decade accolade, Dublin senior footballers have the national title in the bag. This year’s All-Ireland win is their fifth on the trot, a record

- Newtown Blues win the Joe Ward Cup for the third year running, and Mattock Rangers take the intermediate title and then add the Leinster version

- The two All-Ireland hurling semi-finals are classics. Kilkenny beat Limerick and Tipperary get the better of Wexford. Tipp then win the battle of the game’s greatest adversaries

- The Louth county grounds draw is launched, offering two houses as the main prizes. If sales match the organising committee’s enthusiasm, the target will be reached