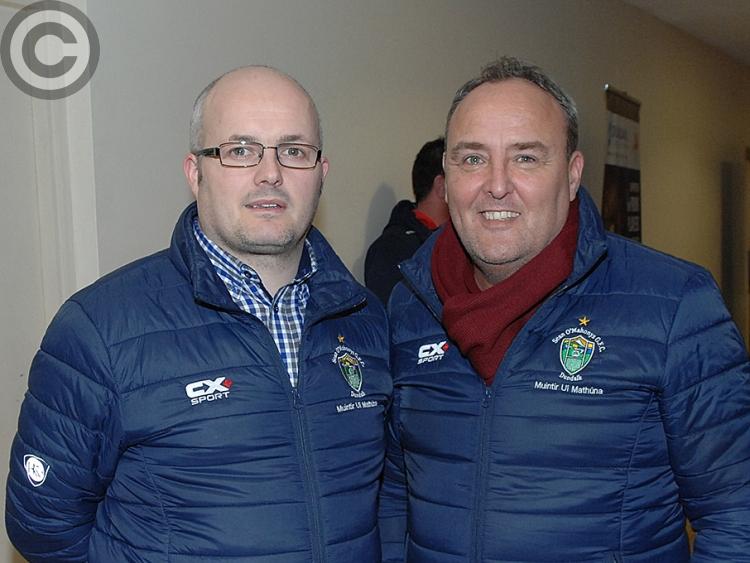 There was debate involving members of the former county executive and delegates regarding the media at Convention, with outgoing PRO Frieda Halpenny taking particular umbrage at a quote which appeared in this paper a matter of weeks back.

Speaking on her report at last Monday night’s Convention, Mrs Halpenny said: “There was an article recently in The Dundalk Democrat regarding the PR and the house draw, and a statement from the grounds committee. I want to clarify this.

“Everything that was sent on to me, as PRO, for the house draw was promoted and promoted to the best. I actually removed an item from our senior programme so that I could include a last-minute ad that had come in for that.

“The only matter that is outstanding from a PR point-of-view is our county website. I had intended to have it back up-and-running for the final stages of the championship. It’s being redesigned and relaunched. However, it came to a complete halt due to financial matters as the deposit of €600 wasn’t paid and the company informed me that they were stopping working on it. It was disappointing that it didn’t materialise.

She added: “I found it disappointing to see a report in a paper from the grounds committee who were quoted as saying: “The grounds committee spokesperson said: “If current officers are not willing to put their shoulder to the wheel and use all forums to promote this venture and ensure its success, they should move over and allow people who want to drive this project - and make it a success - take the mantle”.”

Her husband, Des, who was chairing the meeting, asked treasurer Aidan Berrill, the grounds committee chairman, who was sitting in the seat next to Mr Halpenny, to clarify the statements correctly associated to a member of his delegation.

Berrill responded: “What was said, was said. If it was in the paper… What do you want me to say? There is the gentleman of the press over there… (pointing at Caoimhín Reilly, The Democrat’s sports editor and author of the article under the scrutiny).

“I think the reply you gave us at the time was that nobody from the grounds committee made that quote,” Mr Halpenny replied.

Berrill denied it was him who made the assertion, which led to Mr Halpenny questioning The Democrat’s ethics, standards and credibility, claiming: “No-one from the grounds committee made that quote.”

However, Sean O’Mahony’s delegate Eamonn Doyle took issue with Mr Halpenny’s dismissive approach, saying: “From someone who works in the media and who is involved with the GAA, I think what’s shown here tonight is that it’s a county committee that’s working against each other in some shape or form, which leaves plenty of ammunition for any local radio or local media.

“I think members of the top table, or whoever, are able to give snippets of information to the media, as a way of getting their own message across.

“Sometimes you don’t like it, but I think the top table, without so much having to bash the media, should look at yourselves.”

At which point there was vast applause from the congregation present.

St. Mochtas’ Paul Murtagh was the next to row in behind the press and question members of the executive, which was also greeted with the approval of vast numbers of his fellow delegates.

Mr Halpenny: “Maybe that’s a discussion for the county committee.”

Mr Murtagh: “If the papers are wrong then you can make them apologise publically.”

Mr Halpenny: “That’s something for the incoming committee.”

Mr Murtagh: “As (Frieda) has been saying, we should all be working together, but there’s been three snipes from the top table already. Paddy (McMahon) was getting at Aidan (Berrill), you were trying to get at Aidan and this. It just doesn’t look good.”

This clash, which seemed to transpire against certain members of the leading order when it came to voting time, is the latest incident in what has been a fraught relationship between a selection of the executive and sections of the media this year.

In July, media members were asked to leave the County Board meeting when a discussion arose over Louth teams’ performances during the 2019 championship. This led to seven club delegates walking out in protest and only one County Board meeting took place over the following five months, up until a lately-timed gathering on the week before Convention.

Mrs Halpenny gave mention to only a selection of media outlets in her report, thanking them for their publicity, while CCC chairman Thomas McQuillan took aim at an unnamed reporter, writing: “Thanks to the press & local radio for coverage of our news & games, always very balanced & informative, except for one reporter who seems to be out to make a name for himself at the expense of Louth gaa, at every opportunity he has a pop at our top table or various individuals who are working for the good of the games within our county & at no benefit to themselves”.

It was, thus, refreshing that in his maiden speech after being elected chairman that Peter Fitzpatrick encouraged a transparent and working relationship with the media, adding that he would be free to answer whatever queries they may have.