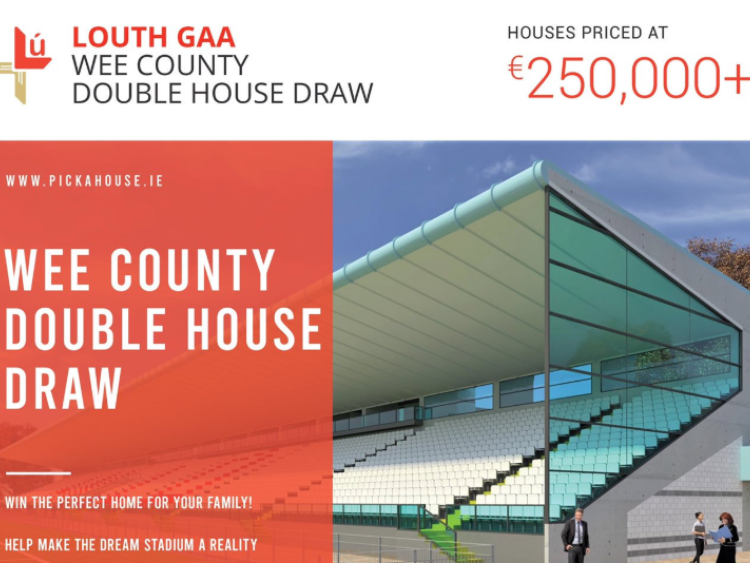 And it must now be asked: Why hasn’t this draw received the full backing of everyone involved?

Louth GAA isn’t prone to helping itself at the best of times, but the circumstances surrounding The Wee County Double House draw in the aftermath of its launch have been strange, to say the least.

It’s over three weeks since the special county grounds committee, a six-strong group of Gaels who have brought the process to this point, held the official opening of the fundraiser which is in aid of the proposed stadium development off Dundalk’s Inner Relief Road.

With the estimated cost of the project presently standing at €12 million, it’s hoped that the draw - which sees residences in Beaulieu and Blackrock up for grabs - will reap somewhere in the region of €2 million, with Croke Park and government funding expected to account for up to 70 percent of the remaining capital.

Much optimism was garnered from the launch at the Imperial, where Leinster GAA chairman Jim Bolger was on hand to offer encouragement over the development. Yet, it was clear from some of the other speakers on the night that underlying agendas persist.

And it must now be asked: Why hasn’t this draw received the full backing of everyone involved?

The grounds committee have recruited a team of people to help with marketing and promotion. Their work so far has included pricing the cost of advertising in the local media, releasing flyers to houses in the south of the county, an undertaking which is set to move gradually north, as well as social media campaigns, etc.

But it’s startling that Louth GAA’s official platforms - Twitter, Facebook and especially the website - have seemingly disregarded the fundraising efforts. If you were to log on to any of the specified digital forms, you wouldn’t even know a draw is taking place, which, given it’s in aid of a cause the county is in dire need of, is surprising.

What of the calls for “everyone to put their shoulder behind the wheel”?

Has there been a breakdown in communication? From inquiries, it seems there has. A person close to the committee insists communiques have been forwarded to Louth GAA’s PR arm requesting the publication of material linked to the draw.

Furthermore, it’s believed the grounds committee have organised a separate Whatsapp group involving all club PROs in a bid to maintain and develop the profile of the fundraiser.

The grounds committee spokesperson said: “If current officers are not willing to put their shoulder to the wheel and use all forums to promote this venture and ensure its success, they should move over and allow people who want to drive this project - and make it a success - take the mantle.”

All clubs are understood to have received a ticket allocation. Though, in some cases, outfits have claimed their inability to fully support the draw this side of Christmas, with the logic behind the six-month period for sales to allow clubs to come on board whenever able.

The amount of apparent “goodwill” on display throughout the county has been praised from rooftops by the stadium committee, and with good reason too. It’s believed one person from the northern half of Louth has sold in excess of €2000 worth of tickets alone, which is fairly staggering and worth commendation.

Entry stubs have been on sale since the night of the launch, but only in person. The online purchasing outlet, which was alluded to significantly by committee chairman Aidan Berrill in several recent interviews, only got up and running last Friday, a fortnight to the night after it was due to be made available.

Again, why was this the case?

All of the uncertainty coincides with the suitable forum for such discussion being repeatedly denied. Since the meeting in which the media were ejected, i.e. the June sitting, which, incidentally, was held in July, there has been one gathering of Louth County Board. This, in itself, isn’t good enough. Over a period in which Boris Johnson tried it at parliament level in the UK, Louth GAA’s County Board has effectively been prorogued.

There also remains the matter of confirming the appointment of a Louth minor football manager. In September, chairman Des Halpenny said the executive had installed Francie McMullan and Shane Lennon, the respective County and Coaching & Games overseers, to a panel charged with nominating a person for ratification to the U17’s post.

It’s believed they have a candidate in mind, but his confirmation cannot be achieved without the county committee’s blessing. And there must be a meeting for this to be granted. The cycle is pretty straight-forward.

Again, it ought to be asked, why have more than half of this year’s County Board meetings not gone ahead, and even fewer when scheduled?

Whatever, or potentially whoever, is to blame for Louth GAA stuttering from one dysfunctional occurrence to the next must start “putting their shoulder to the wheel”.