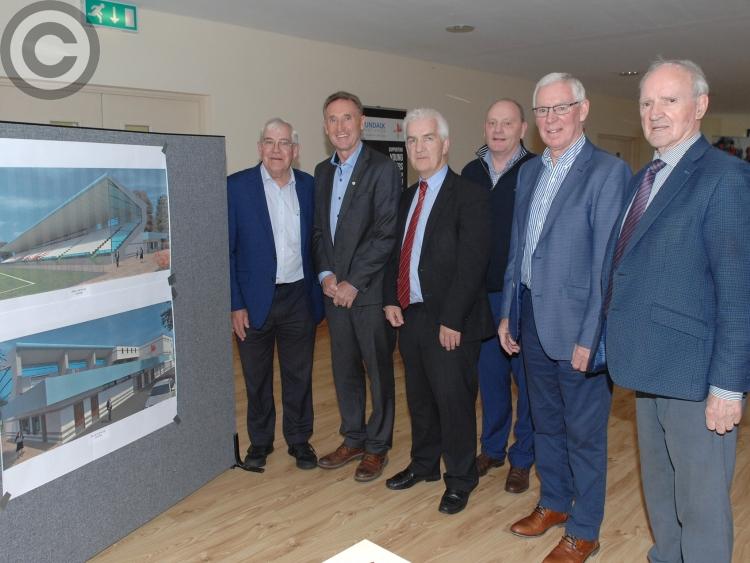 The raised sum of €10,132, which is a slight decrease on last year’s amount, was referred to in the accounts as coming from ‘golf classic and draws’, a point which outgoing vice-chairman Paddy McMahon tackled the treasurer on, insisting no golf classic took place this year.

“I’d like to correct one thing,” said Mr McMahon.

Mr McMahon requested then chairman, Des Halpenny, to press Mr Berrill on the issue and after consultation with County Manager Francie McMullan, which seemed to inspire bemusement among delegates, the treasurer revealed the money came from a raffle backed by the underage development squads.

On the fundraising issue, Sean O’Mahony’s chairman Pat O’Brien gave a forthright opinion on where he felt the onus for money generation should lie, particularly in light of the county grounds project.

“I point the finger at the top table,” Mr O’Brien said.

“We’ve enough to be doing running our own clubs. You can’t be depending on Pat O’Brien or Noel Carrie or Stephen Murphy, because we have to gather our own money, €60,000 odd to run our clubs this year.

“We wouldn’t have time to go and organise funding for an event. And that just takes me on to this new stadium. Okay, we’ve a new committee in and a well-balanced committee. There’s goodwill out there and we’ll do our best, but we won’t get it across the line.

“We’ve a list of people looking for top jobs here in Louth, they have to be told that they’re going to have to lead this drive for a new stadium. If they don’t do it, it’s not going to be done.

“We’ll do our best, but any man who puts their name forward for a top job should be made aware that it’s up to them and should be held accountable. We don’t want any freeloaders.

“Gone be the days of someone getting a top job here and going away off to different events at Croke Park and getting their tickets for different games. That has to stop, at least for the next couple of years.

“Anyone putting their name forward should be leading the way for a new stadium.”

A rapturous round of applause followed, with Mr Berrill accepting Mr O’Brien’s assertion.

Sean McDermotts’ Kevin Carroll asked where the county’s team administration costs, which spiked this year, stood in comparison to other counties, with Mr Berrill, in his response, referring to the amounts spent by Roscommon, Dublin, Mayo and Tipperary, which, he added, ran into millions.

Paddy Farrell, of St. Bride’s, endorsed Mr O’Brien’s earlier claim that clubs can’t cope with any further financial burden, before launching into the finance scheme in aid of Darver Centre of Excellence, which clubs are effectively duty-bound to pay into.

The contribution scheme took in over €100,000 this year and is set to continue for another six years, having been in circulation for nine already, with the Darver debt now standing at just over €500,000.

“The biggest problem here is, of course, the fund that we did away with: the supporters’ club,” Mr Farrell said.

“Everyone is sick with what happened to the supporters’ club and the money they raised and gave in here.

“On top of that, I feel the money we’re contributing to Darver on the clubs, it’s time that that was washed aside and we get Croke Park to clear that debt. Then we’d be well able to finance our own clubs, County Board and county grounds.”