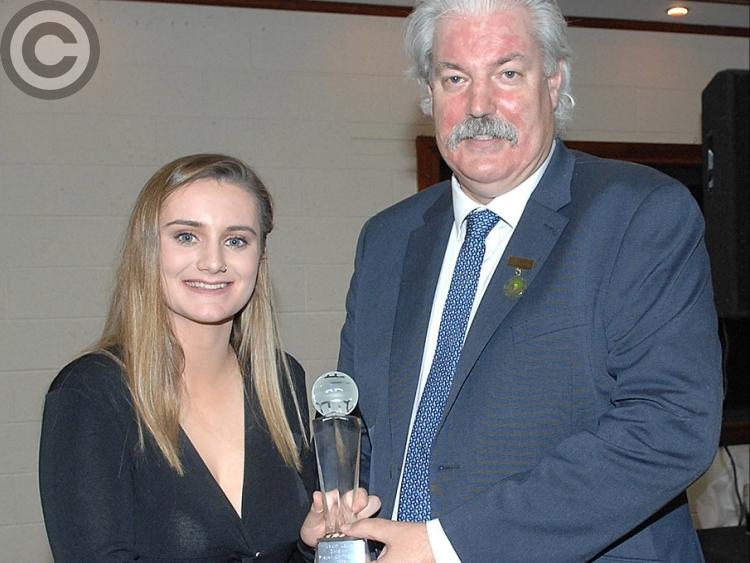 Niamh Rice was hesitant about attending Friday night’s Louth LGFA club awards, but encouragement from her father, Feilim, ensured her presence where she completed a glamorous clean sweep.

The Louth star earned a maiden place on the Division One team of the year, in what was her fourth consecutive campaign to be nominated, before being announced as the league’s Player of the Year.

“I didn’t expect it at all,” Rice told The Democrat.

“I just come to these things every so often and hope for the best.

“This is actually the first year I won anything and to get two in the one go is really amazing.”

The teenager has enjoyed a remarkable campaign for both club and county, winning Leinster and All-Ireland junior titles with Louth before helping Cooley to reach both the championship and league finals, winning the latter.

Indeed, it had much to do with her displays towards the end of the domestic season that saw Kickhams avenge their senior final loss by dethroning Geraldines of the Division One silverware.

“In Cooley we had a bit of a transition year, losing a good few of our experienced players, but it still wasn’t half bad,” she quipped.

“We got to a county senior final and maybe the result didn’t go the right way, but it was another experience.

“We won the league and (I) got to an All-Ireland and Leinster final with Louth, so it’s been a pretty good year.

“After the wee bit of a break, at training with Cooley over the last few weeks we were saying ‘it’s now or never, we’ll end on a good note’.

“We played the Mochta’s (in the league semi-final) and had a very good performance, against a very good Mochta’s side, and in the final, you kind of knew from the atmosphere in the dressing room beforehand that it was going to go the right way; that we were going to win.”

Rice was at the first county training session held by recently appointed manager Wayne Freeman on Sunday, a matter of weeks after scoring a memorable goal in the All-Ireland final win over Fermanagh at Croke Park.

Time flies by, she admits.

“I haven’t had much of a break, but what else would I be doing with my time?

“I’m looking forward to it; new management, new team and a fresh start.”