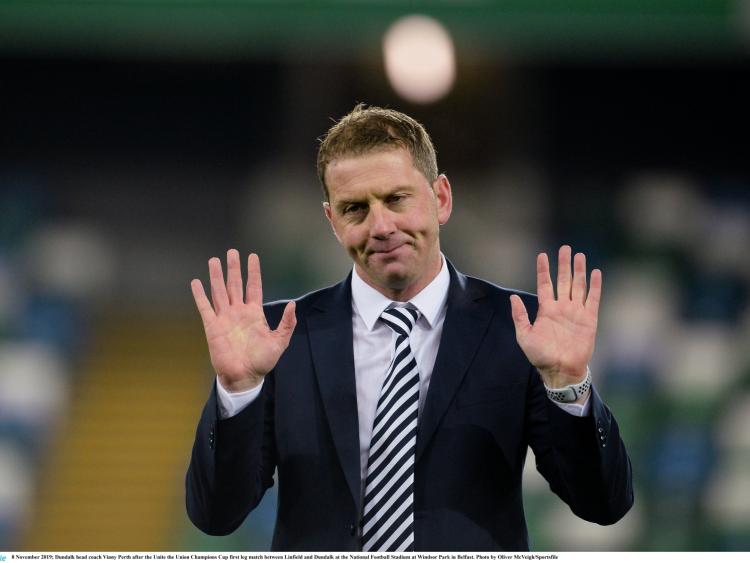 Vinny Perth has rejected claims that three of his main men are set to depart Dundalk FC. (Pic: Sportsfile)

Vinny Perth has rejected claims that three of his main men are set to depart Dundalk FC.

Captain Brian Gartland, Robbie Benson and Jamie McGrath have each been linked with ending their long-term ties with the Oriel Park club.

St. Patrick’s Athletic, under the tutelage of Dundalk legend Stephen O’Donnell, are understood to be in contention to sign both Gartland and Benson, while McGrath’s future is up in the air.

The latter has confirmed that talks will take place over a new deal, but that he is “50/50” on whether he will remain with The Lilywhites.

Uncertainty over the trio comes amid news of Dundalk’s first close-season signing, midfielder Greg Sloggett’s expected transfer having been announced on Friday afternoon.

Perth said: “We have got a couple of players out of contract. First of all, the world’s gone crazy. The story about Brian Gartland is just people guessing. Robbie and Jamie are both out of contract and these things take time; both could be at the club or both could be gone.

“The difference with Dundalk now is we’re actually very well prepared if both decide the time is up. If both decide to stay, we’re ready. But Brian Gartland being linked away from the club is just nonsense.”