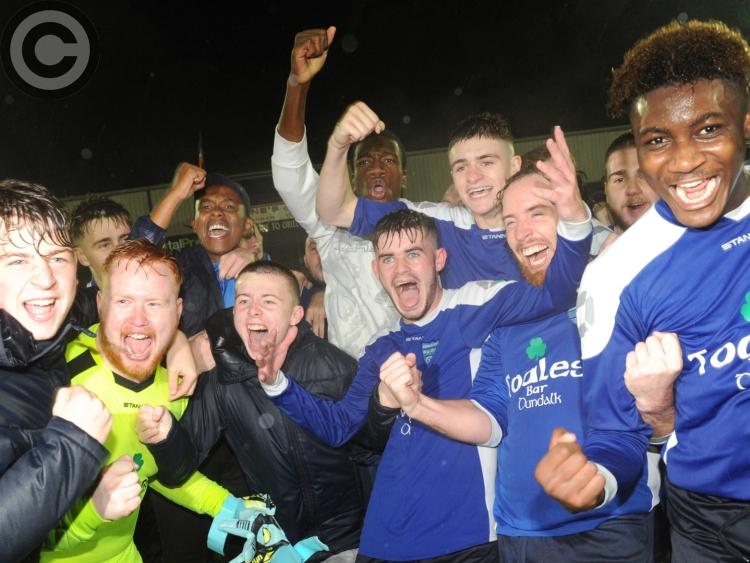 HIGHLIGHT
While it may seem a slightly left-field choice, the coolness of Ben Kapinga to finish Glenmuir’s third goal stood out among all the four goals on the night. Played into his path by Peter McStravick, the forward calmly picked his spot in the bottom corner from in or around 12 yards out. It would have been easy to panic and slash it. An impressive finish.

LOWLIGHT
A degree of petulance crept into the game towards the finish which led to a flurry of cautions and strong challenges which were out of sync with the rest of the match. Frustration, it would appear, got the better of some players, while others perhaps allowed their tiredness to impact on their efforts.

TALKING POINT
Few would have predicted such a relatively comfortable victory for Glenmuir prior to Saturday night’s McConville Cup final, but the Hoey’s Lane side were worthy victors, albeit Redeemer had ample opportunities to make more of a palpable fist of proceedings.

TURNING POINT
The awarding, and subsequent conversion, of a sixth minute penalty greatly and decisively hindered Redeemer’s bid for a Dundalk Summer League double. Albeit Glenmuir had started brightly, there was nothing to suggest the game was going to be as relatively one-sided as it transpired in the short period before Peter McStravick opened the scoring. It will remain a mystery how the game would have panned out had Ryan Carroll not been punished for his hand ball.

MAIN MAN
While Conor Richardson and Jamie Browne were outstanding, to score a double in a major final deserves the ultimate recognition in the individual’s category. On another night Peter McStravick may have added a third to his two-goal salvo, while he was an integral member in the move which led to Ben Kapinga completing Glenmuir’s scoring. Led the line intelligently and never relented in his chasing of lost causes.

REF WATCH
Brian Murphy can’t be faulted for his display at Oriel Park. The whistler’s impact on the outcome was scant and in keeping control of proceedings, his display lended to the game’s general uninterrupted flow.

WHAT’S NEXT
The end of another successful Dundalk & District League season in which both of Saturday night’s finalists earned silverware, Redeemer having won the league for the first time in their history. Glenmuir became the first new winner of the McConville Cup since 2006, while Rampart Celtic earned Clancy Cup glory courtesy of their victory over Bellurgan United.