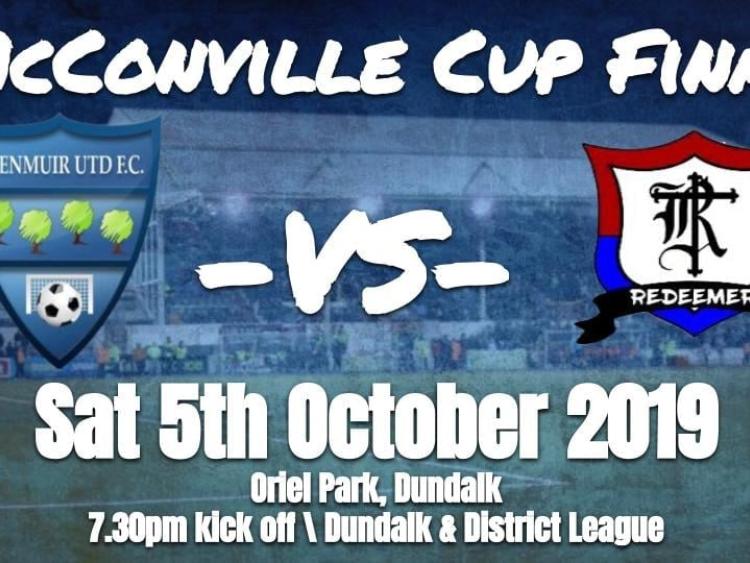 Glenmuir United wrote their names into Dundalk & District League history on Saturday night by winning the Brian McConville Cup for the first time.

Glenmuir United wrote their names into Dundalk & District League history on Saturday night by winning the Brian McConville Cup for the first time.

Peter McStravick was their two-goal hero under the lights and heavy rain at Oriel Park as the Glens caused a surprise in denying league winners Redeemer Celtic from claiming a domestic double.

It was truly a contest to forget for the Cox’s Demesne side, who got off to a dreadful start when Ryan Carroll was adjudged to have handled in the area, which led to McStravick blasting home Glenmuir’s opening goal after just six minutes.

And the gap was doubled on the stroke of half-time when the Blues’ No.9 nodded past the stranded Cillian Rice for a score which ultimately put the encounter beyond the favourites, who endured a most frustrating outing in front of goal.

Having conceded the first in such avoidable circumstances, Celtic took the initiative midway through the first half, but failed to test Glenmuir captain Jordan Mackin with any meaningful attempt.

They had several half chances and appeared dangerous from set-pieces, one of which saw defender Kian McEvoy bullet a header off the crossbar. In stoppage time at the end of the first half, a conversion may well have altered the outcome.

Especially considering they cranked up the pressure noticeably when turned around, attacking the Carrick Road end. Their most memorable opportunity saw Thomas Daly force Mackin into a tremendous stop and the custodian would later be needed to prevent Redeemer from setting up a grandstand finish, plucking the ball out of the top corner following a scramble inside the 18-yard box.

With eight minutes to go, Glenmuir looked set to cruise to victory, when the excellent McStravick played across for forward partner Ben Kapinga to make it 3-0. The rangy Glenmuir attacker finished the pass with aplomb.

The winners were rocked to some degree moments later, though, when Paddy O’Connell bizarrely reduced Redeemer’s arrears, giving them some reward for their good second half play. But Glenmuir, with Conor Richardson outstanding at the heart of their backline, avoided further concession to take the spoils.