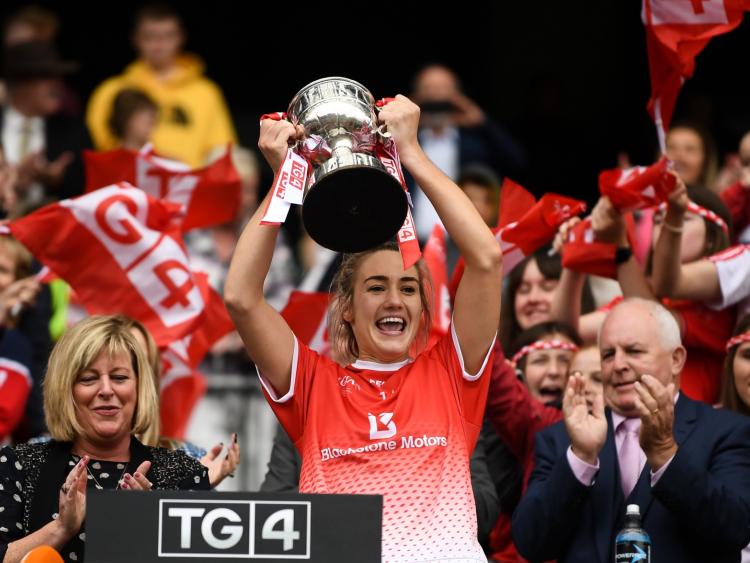 Kate Flood joked that her trophy acceptance speech in the Hogan Stand was the most stressful part of a fabulous day for Louth at Croke Park.

The St. Patrick’s star, who became the third Wee County captain to lift the junior All-Ireland title, was in incredible form, scoring 1-8 of her team’s 3-13. To cap her display she was named Player of the Match.

“Doing the speech would be the stressful thing, I suppose playing football would be the comfortable part,” she said.

“Winning and winning with such a great bunch of girls means the most ever to me.”

On her team’s performance, Flood said: “We knew that if you go into Croke Park and go a hundred miles an hour at the start, you’ll start to burn out, but all morning we were so calm and a lot of us were here last year. I think that stood to us because it is a daunting thing coming here.

“We were doing the smart thing by keeping our energy levels to a minimum and once we got the upper hand we let fire.”

And the 27-year-old reckons this victory, in what was The Reds’ fifth Jones’ Road appearance of the decade, can set Louth LGFA in motion for years to come.

“We were here last year and didn’t show up at all, so I think we were here to prove ourselves and prove that there is football in Louth and that we can go on and do it,” added Flood.

“It’s about building football in Louth and putting ourselves on the map. That’s what we did out there today.”