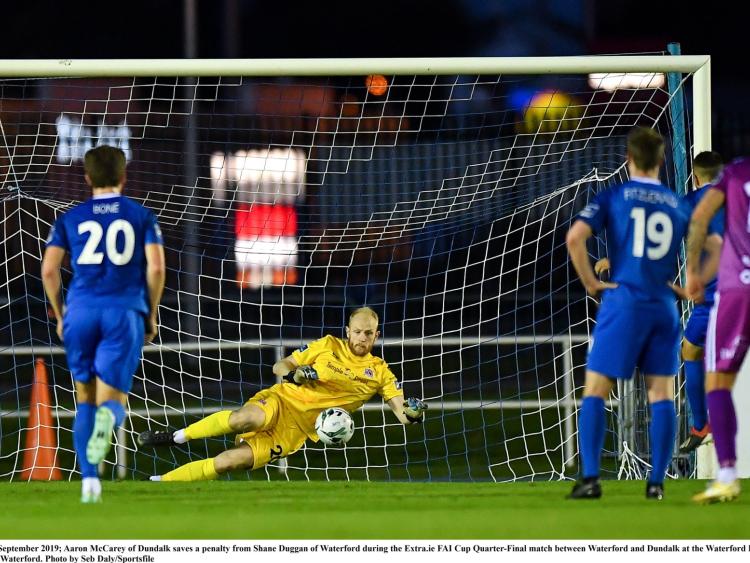 Goalkeeper Aaron McCarey admits that he cannot have “too many arguments” about playing second fiddle to Gary Rogers this season, but he was delighted after impressing in Dundalk FC’s Extra.ie FAI Cup quarter-final win in Waterford where he saved a first-half penalty.

The former Wolverhampton Wanderers stopper is in his first year at Oriel Park, but, given the form of Rogers, he has had to be content with cup competition appearances.

Monday was Dundalk’s seventh outing between the FAI Cup, League Cup and Leinster Senior Cup, and it was the sixth time that McCarey had lined out – missing only the extra-time win over Derry City in the previous round of this.

McCarey – who was called up to the Republic of Ireland senior squad only last year – showed his quality with a confident display where he blocked Will Fitzgerald in a one-on-one and then brilliantly held Shane Duggan’s spot-kick, before also denying Kenny Browne from point-blank range after the break. 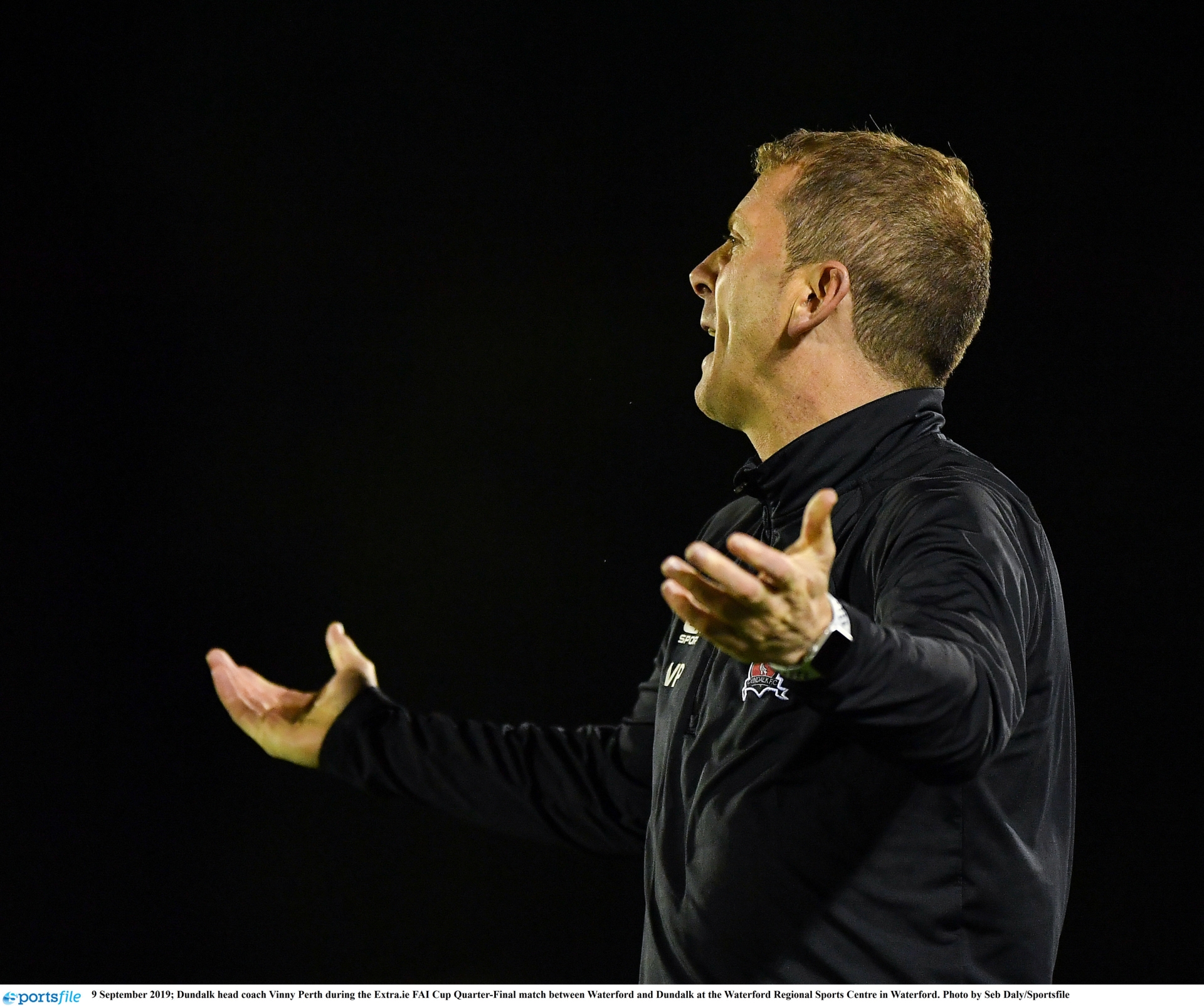 Rogers, 37, has racked up 20 clean sheets from his 30 Premier Division outings, so McCarey accepts his current position as back-up ‘keeper.

However, his performance at the RSC may well have put him in the picture for a starting role in Saturday night’s EA SPORTS Cup final in Derry, with the 27-year-old having started in all three rounds of that competition to date.

“When you get the opportunity, you have to grab it with both hands, with the quality of our squad,” McCarey said after Dundalk’s 3-1 victory. “Especially Rodgy and Ross (Treacy) as well – we’re all pushing each other every day in training.”

He added: “It can be frustrating but I don’t think I can have too many arguments about it – it’s a winning team, we’ve been keeping clean sheets, I think we have the record number of clean sheets, so you can’t be too disappointed.

“Obviously, every player wants to play but you just have to go in, train, train and keep training and make sure that you’re ready when nights like this come and your opportunity comes. You’ve done all the hard work throughout the year and it pays off then.”

Reflecting on his display, Aaron said: “I’m pretty happy; I’m just a little bit disappointed I didn’t get the clean sheet, but, overall, to get through to the next round of the cup, it’s a good night for us. It’s an opportunity for us to go again and test ourselves. 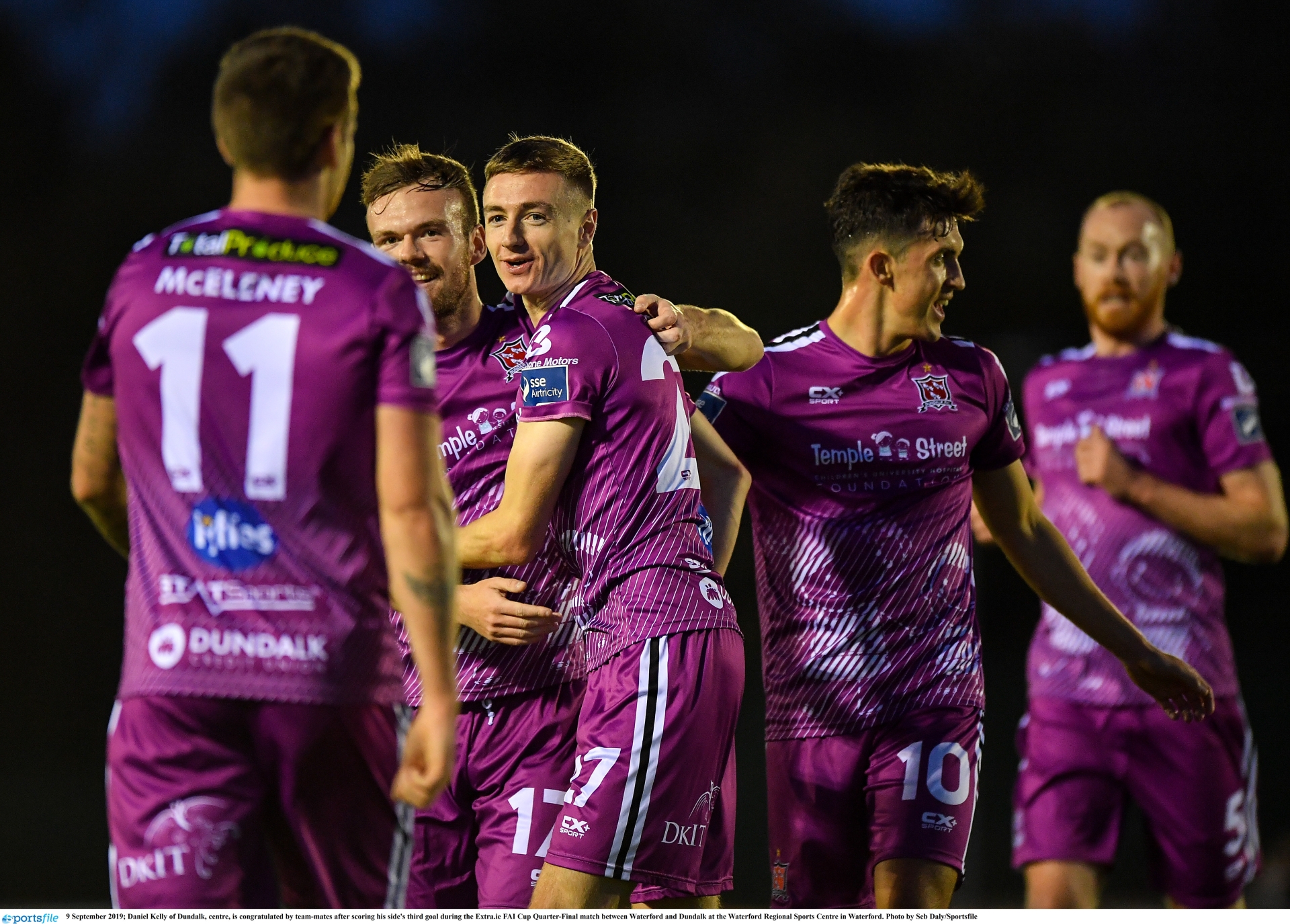 “Dicky (Daniel Kelly) took his hat-trick really well – he was brilliant. I thought everyone in the first half was exceptional. We got a little bit sloppy at the start of the second half, we probably didn’t play to our true potential.

“I was delighted to save the penalty. I had a chat with Giller (John Gill) and Higgs (Ruaidhrí Higgins) before the game to see who the penalty takers were and I was always confident in my ability to save it.”

First-team coach John Gill reserved special praise for McCarey afterwards, in what he hailed a “magnificent” team performance. Gill was speaking about Daniel Kelly’s delightful 24-minute hat-trick, and said he was “thrilled” that McCarey showed “how good a ‘keeper he is”.

“Daniel has done really, really well – three great finishes – and he’s capable of doing that," Gill said. "He’s getting better and better each week. I thought, again, the team as a whole made the opportunities for him with some scintillating football.

“I just thought we were excellent all-round tonight. I thought it was as complete a first-half performance as we’ve had this season.

“I’m thrilled for Aaron McCarey who came in and showed what he can do with a great penalty save, although we were disappointed with the decision for the penalty. But I think he showed tonight how good a ‘keeper he is. I’m thrilled for him.”

Gill is now hoping for a change of fortune in the semi-final draw as Dundalk look to become the first club since Shamrock Rovers 50 years ago to reach a fifth straight FAI Cup decider.

“I think we’ve been a little bit unlucky with the draw – we’ve had to go to Cobh, Derry and Waterford. We don’t care who we get. It’d be nice to get a home draw, get Oriel rocking, get it packed.

“We’ve got to focus on Saturday. We keep saying it, it is the next game, literally, so we’ll focus on Saturday now and get that one out of the way, hopefully get a trophy into the cabinet and push on from there.

“We’re relishing going up there in front of a full house. We’ll bring a big crowd up with us. These players deserve everything that they get and hopefully on Saturday we’ll get our hands on our first bit of silverware. But we know that it’s going to be a really, really difficult game.”