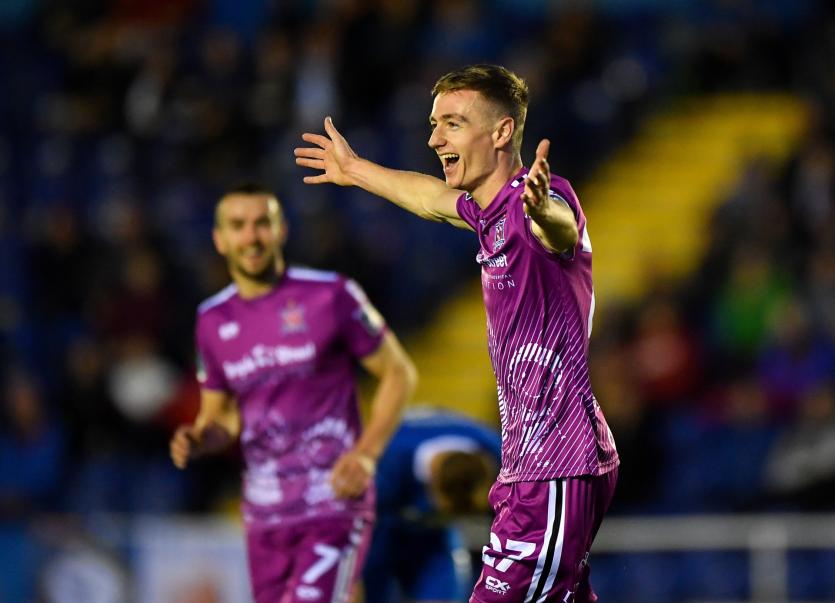 Daniel Kelly’s second hat-trick of the season kept Dundalk FC on course for the domestic treble as they sauntered into their seventh FAI Cup semi-final in eight years with a 3-1 win over Waterford at the RSC on Monday night, thus extending their unbeaten run to 26 games.

Ahead of Saturday’s EA SPORTS Cup final in Derry, Lilywhites head coach Vinny Perth took the risk of resting some of his regulars, with Gary Rogers and Seán Gannon left on the bench.

But it was a brave call that paid dividends in stunning style as they led 3-0 by the 33rd minute. Waterford, it must be said, shot themselves in the foot with some dreadful defending but Dundalk took full advantage.

Patrick Hoban was creator for the opening two goals which Kelly finished clinically, and the 23-year-old – who hit three against Finn Harps back in April – added his third when heading Patrick McEleney’s cross to the net.

Waterford should have immediately pulled a goal back but, after Will Fitzgerald was denied by Aaron McCarey, the stand-in goalkeeper got down brilliantly to hold Shane Duggan’s 35th-minute penalty.

After a bright start to the second half, The Blues reduced the deficit – and sparked a mini revival – approaching the hour-mark when Georgie Poynton’s corner found a way in off Maxim Kouogun.

It should have been 3-2 seconds later but somehow Michael O’Connor missed the target, and that ended any hope of a comeback. 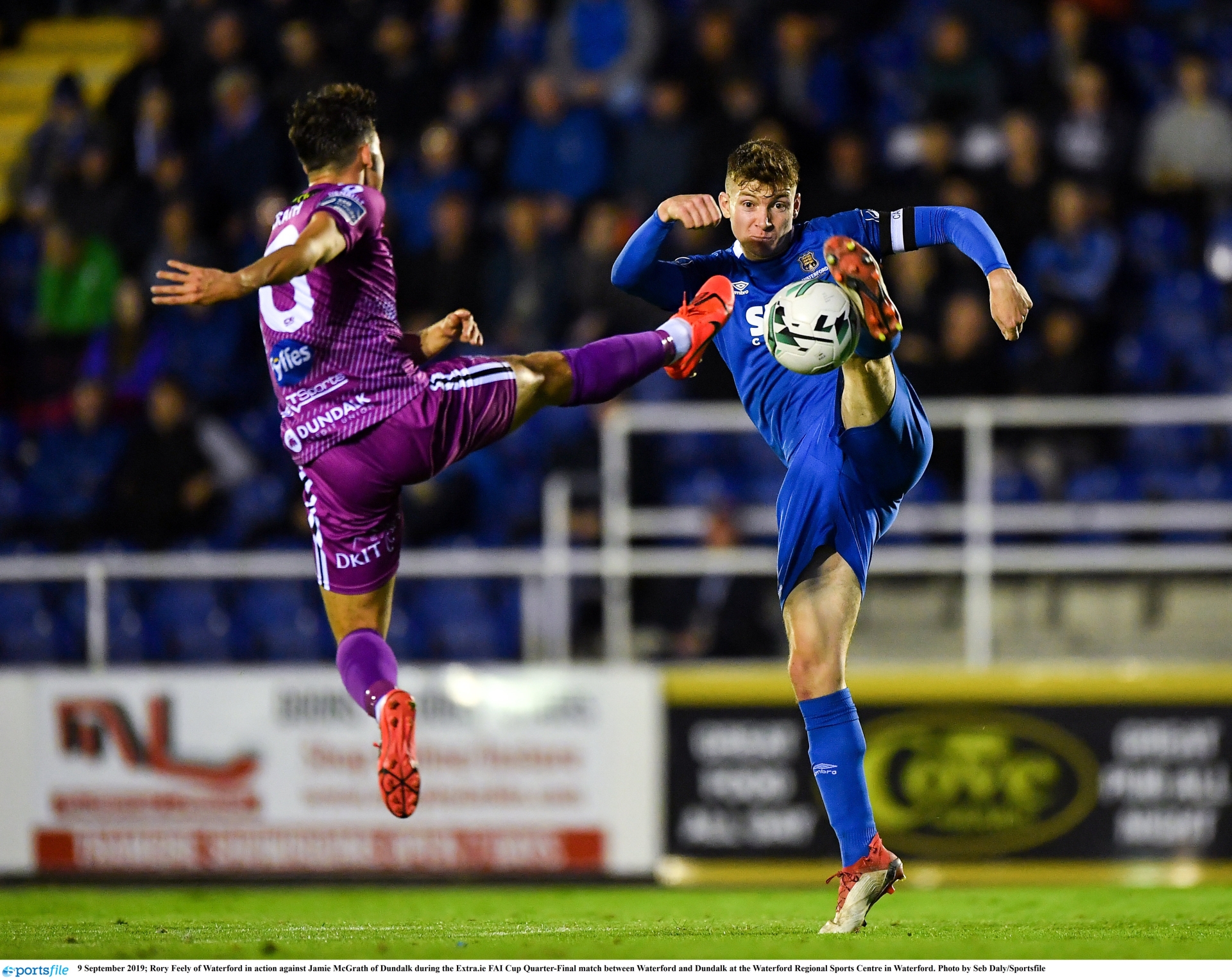 For the last-eight clash, Perth had sprung a surprise in his starting XI with McCarey given the nod between the sticks ahead of Rogers.

That was one of six changes from Friday’s late 1-0 league win over Cork City at Oriel Park, with Brian Gartland, Seán Hoare, Cameron Dummigan, Dane Massey and Kelly also coming in.

Prior to the game, a hero from the second-round win in Derry, centre-half Daniel Cleary was put through his paces by strength and conditioning coach Graham Norton alongside Dylan Hand and Stephen Folan. Separately, midfield pair Jordan Flores and Seán Murray did some pitch-side running.

Waterford winger Fitzgerald – who may well have been a Dundalk player this season had Stephen Kenny remained as manager – was the sole survivor from their win over Hearts U21s in the Tunnock’s Caramel Wafer Challenge Cup 72 hours earlier.

Ex-Dundalk pair O’Connor and Poynton were brought back in by Alan Reynolds, but there was no place in the home team for Lithuanian international Karolis Chvedukas, who was in the stand. Their star player Zack Elbouzedi missed out due to Republic of Ireland U21 duty.

The Lilywhites – wearing their purple kit in support of the Temple Street Foundation – had the first effort of the evening in the fifth minute when Hoban was given too much space 25 yards from goal and his low shot from a central position was turned away by ‘keeper Matthew Connor.

Hoban turned creator for the breakthrough on nine minutes when the Dundalk striker was given acres of room once again, this time down the right, and his delivery picked out Kelly who almost burst the net from close range. 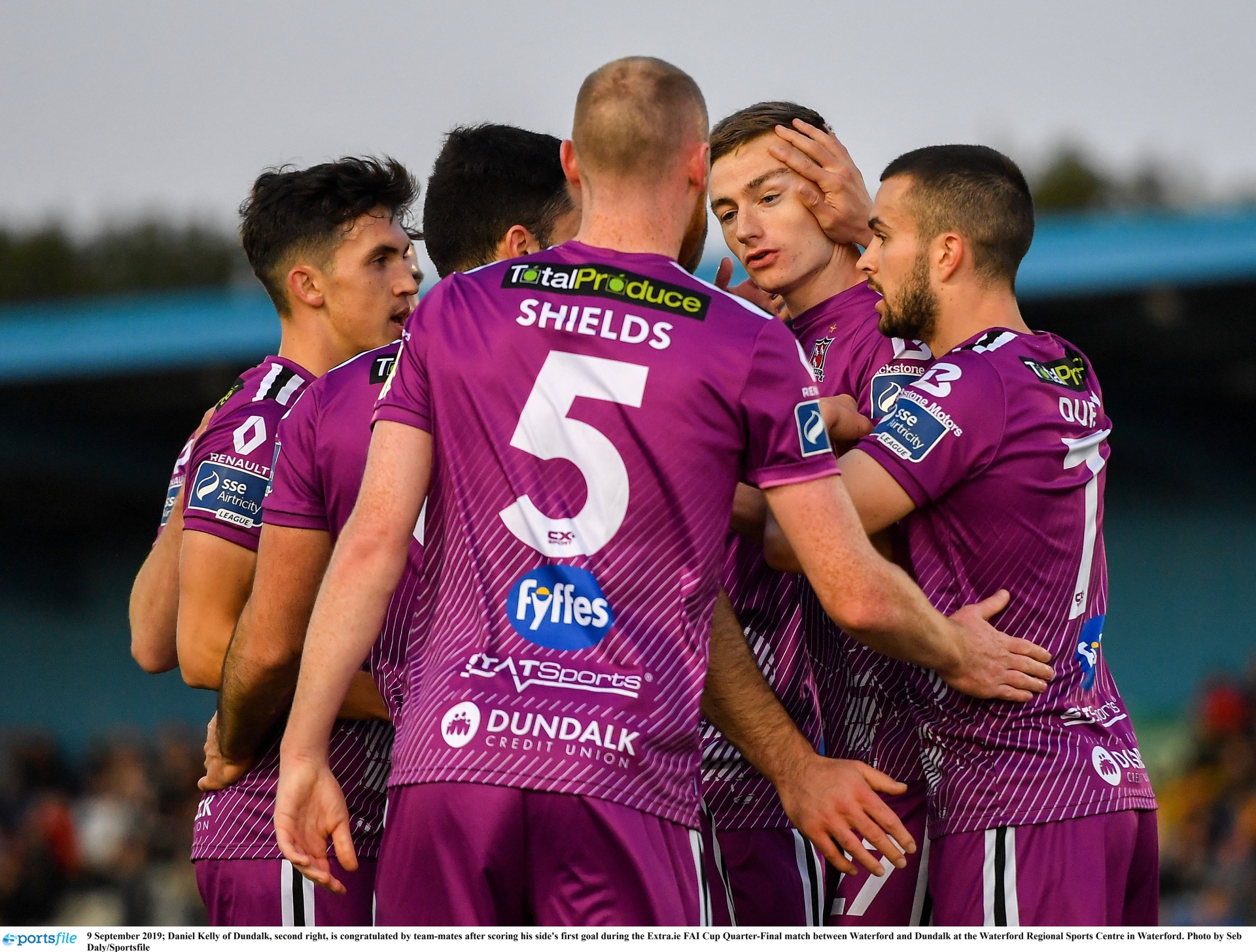 Dundalk doubled their lead in the 23rd minute when Hoban lifted the ball into the path of Kelly who was left all alone and, with just Connor to beat, he coolly slotted past him at the near post.

Waterford were stunned and it took until the half-hour for their first opportunity when Fitzgerald laid the ball back to Kevin Lynch whose deep cross was headed narrowly wide by captain Rory Feely, who had raced forward from right-back.

The game was effectively over as a contest on 33 minutes when McEleney’s dinked cross was headed into the bottom corner by Kelly to complete his hat-trick.

Waterford should have scored moments later when Fitzgerald seized on a poor pass but McCarey came out to block well. The hosts were then awarded a penalty when Gartland brought down O’Connor, but Duggan’s spot-kick was held superbly by the former Warrenpoint Town ‘keeper.

Jamie McGrath could have added a fourth before the break. Dundalk’s in-form No.10 was lucky to get away with handling the ball as he controlled it in the box and his shot whistled past the upright. Hoban then headed over from Dummigan’s cross. 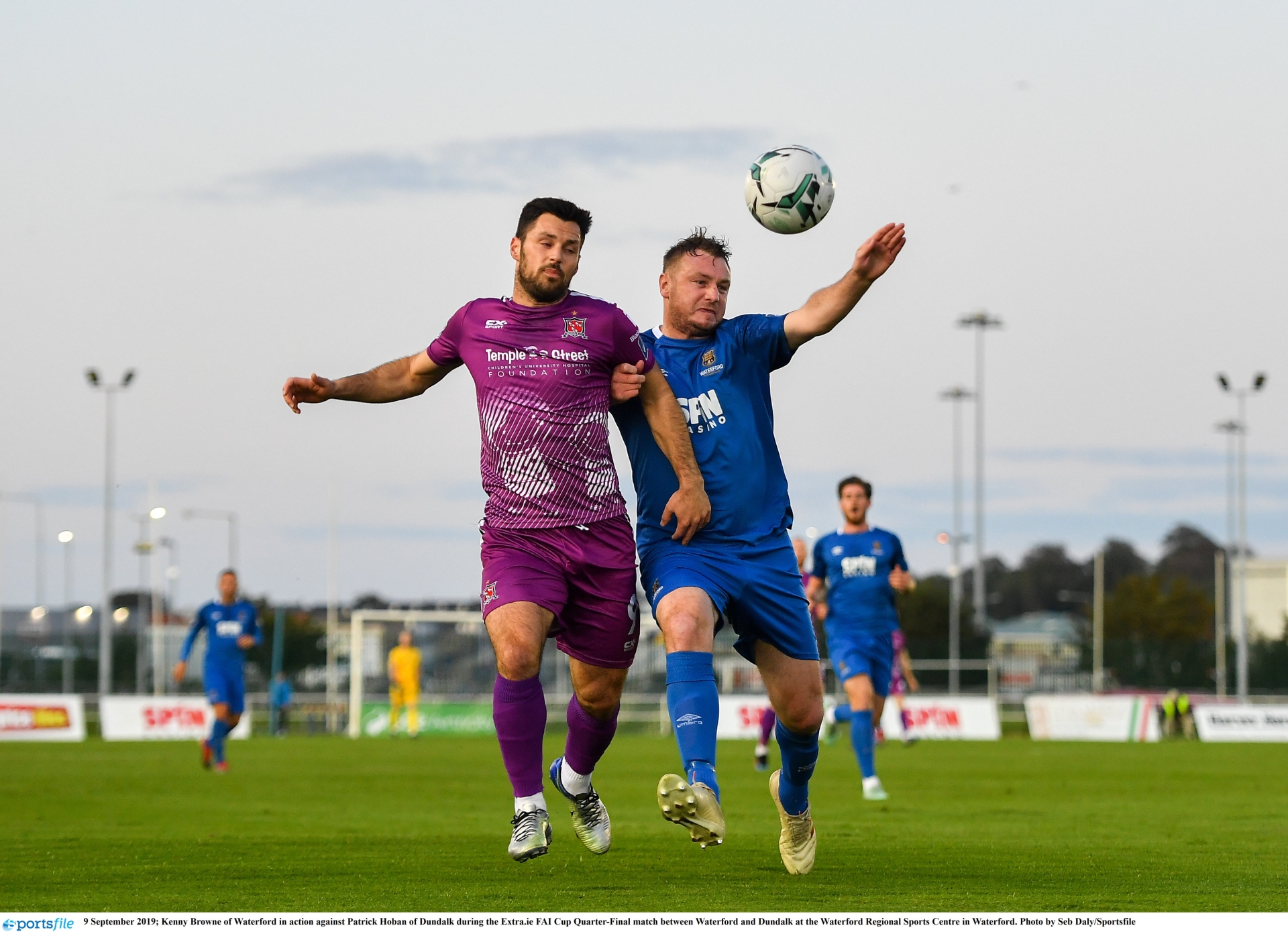 After the resumption, Waterford started well and McCarey produced another good save to deny Kenny Browne from close range after he connected powerfully with Poynton’s deep free-kick to the back post.

Poynton provided the corner for Waterford’s goal in the 56th minute which was directed into the net off Kouogun. It really should have been 3-2 almost immediately when O’Connor showed good strength and control to latch onto Poynton’s ball over the top but he inexplicably missed from close in.

That miscue spelt the end of an unlikely fight-back, really, and in the final 20 minutes Perth emptied his bench as Gannon, Robbie Benson and Georgie Kelly all came in, as Dundalk joined Shamrock Rovers and Sligo Rovers in the last four. Bohemians and Crumlin United will play the remaining quarter-final next Monday.

For Dundalk, focus now turns to the first piece of silverware of the season as they aim to take Derry City’s grip off the EA SPORTS Cup at The Ryan McBride Brandywell Stadium on Saturday evening (kick-off 8pm).