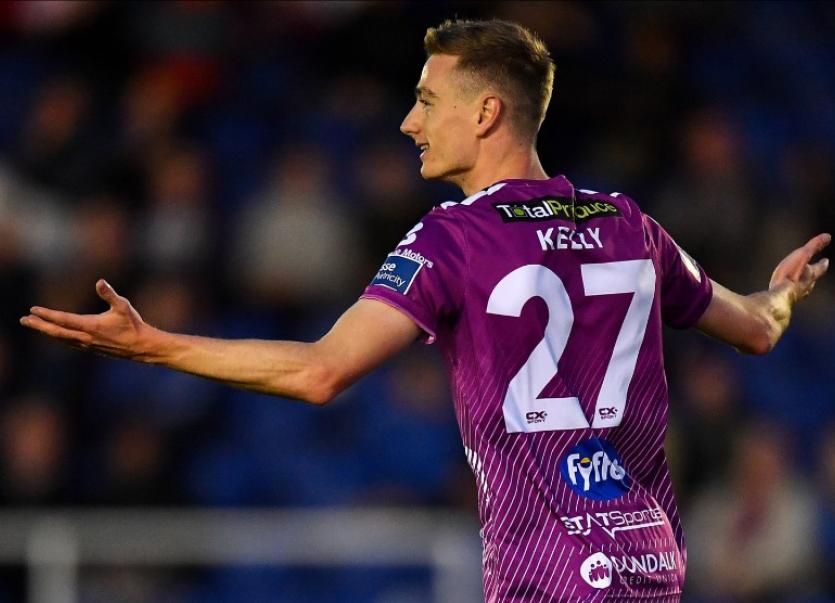 Daniel Kelly missed out on the match ball after being outrun by the referee but Dundalk FC’s hat-trick hero will gladly wait a week on the memento after shooting his side into the Extra.ie FAI Cup semi-finals with a 3-1 win over Waterford on Monday night.

The winger was clinical in his first-half finishing as he struck a 24-minute treble to put the tie beyond The Blues, who only briefly threatened a response after the break.

Kelly had Patrick Hoban to thank for providing his opening two goals, and his third was a fine header which came from Patrick McEleney’s delicate cross.

It was the 23-year-old’s second hat-trick of the year, having struck one at home to Finn Harps in April. However, this time, he will have to wait until The Lilywhites’ league trip to the RSC on Friday week to pick up his prize. 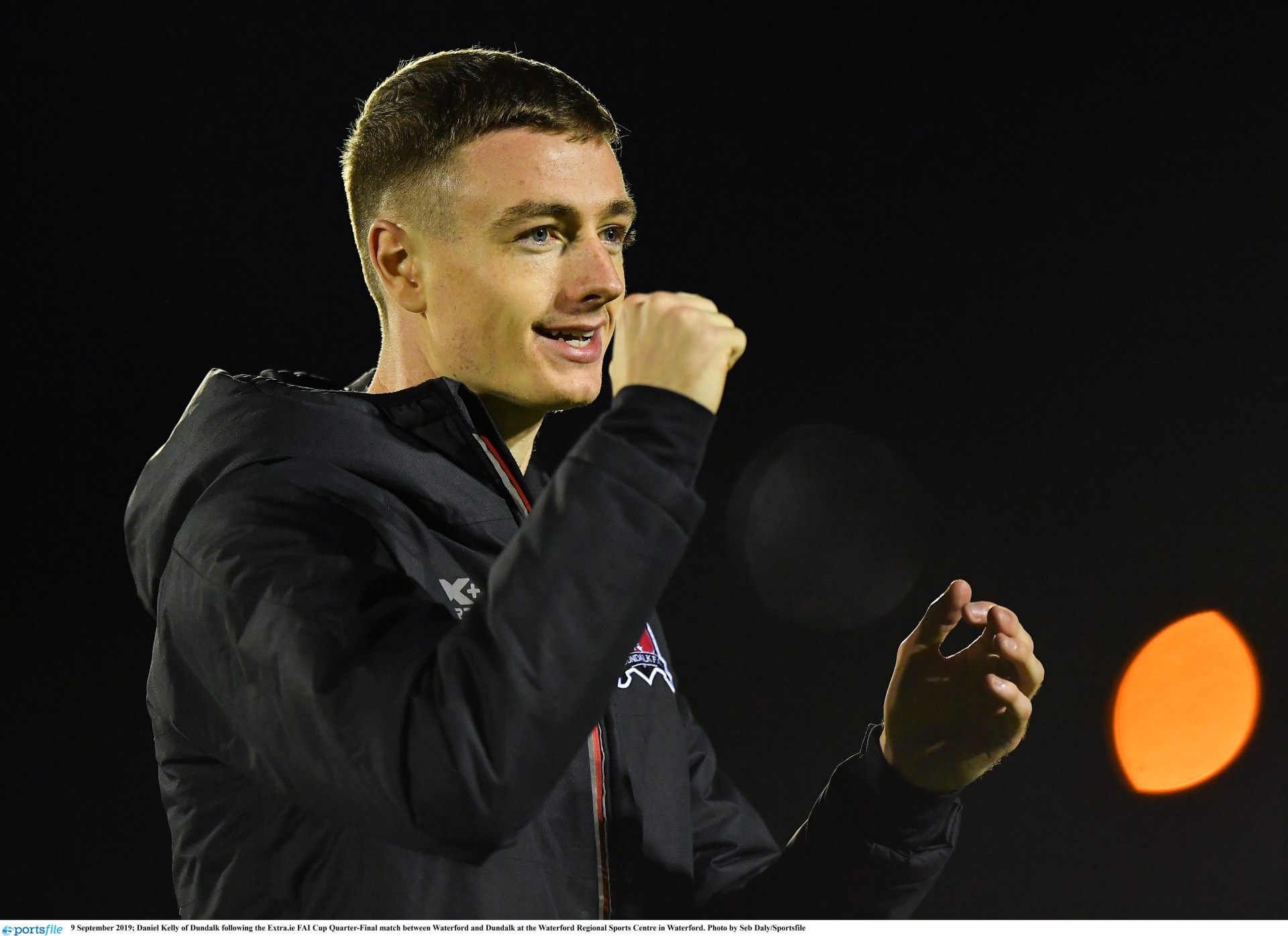 “I actually haven’t got it at the moment,” Kelly – who became the first Dundalk player to score a hat-trick in the FAI Cup since Ger McCarthy against Monaghan United all of 14 years ago – said afterwards.

“They’re sorting it out for me for next week because I couldn’t catch up with the ref after going over and clapping the fans. They’re going to sort it for me because we’re here next week, so I’ll get it then hopefully – please God anyway.

“The first half, we were absolutely on it. This is my second hat-trick this year. I didn’t think I’d even get one hat-trick in the League of Ireland. That’s 11 goals this season – my target was 10, so I’m going to go for 15 now, hopefully!

“A couple of the goals, the lads have done really, really well for and put them on a plate for me. I’m delighted that the three of them have gone in. The main aim was to come down here, get a win and get through to the next round. We’re into the semis now, thank God.” 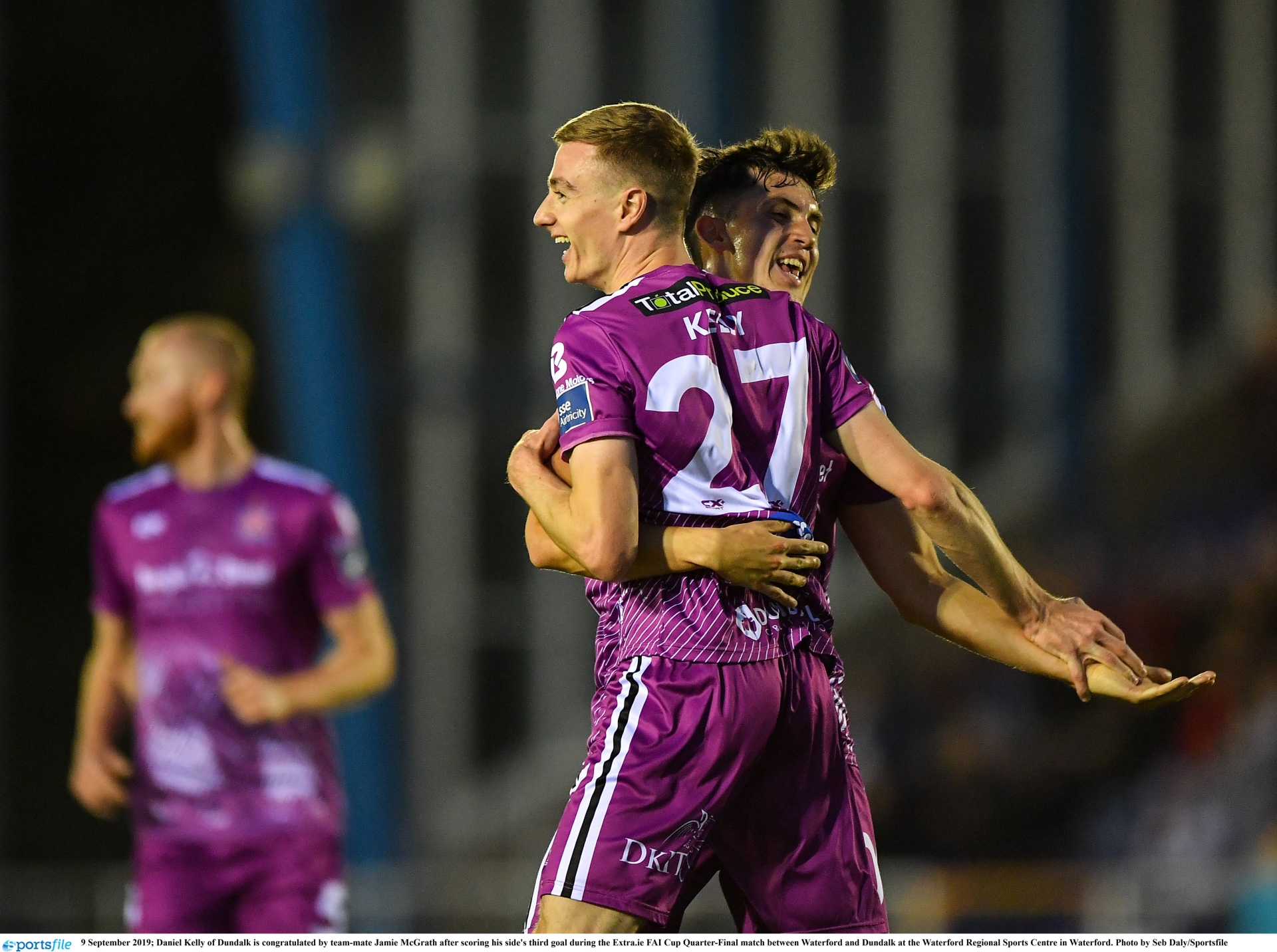 Kelly withdrew in the second half after picking up a knock sustained in a challenge from Shane Duggan – who apologised for the tackle – but he hopes to be fit for Saturday’s EA SPORTS Cup final in Derry.

Waterford had staged a rally after the restart, with Maxim Kouogun’s goal reducing the deficit, but they missed a golden chance to make it 3-2 soon after as Michael O’Connor miscued from close range after shooting with his weaker foot.

Kelly was pleased with how his team saw out the game. “Obviously, the likes of Shieldsy, Garts, Ganno, Massey – have been there and done it,” he said.

“We were under the cosh for a certain amount of time, but the lads know how to control a game and thankfully we’ve come out of here with the win. Hopefully, we can go into the semi-final in as good a form as we are at the moment.”

In the second round of the FAI Cup, Kelly opened the scoring against Derry City with a wonderful header, and Dundalk return to the scene of that victory in the EA SPORTS Cup decider this weekend.

“It has all the makings to be a brilliant game,” Daniel said, looking ahead to the clash at The Ryan McBride Brandywell Stadium. “Derry have been really tough opponents for us this year. We got a bit of luck in the last round to go through in the FAI Cup.

“They’re a really good side, especially in The Brandywell, with the crowd there. I can’t wait for it.”