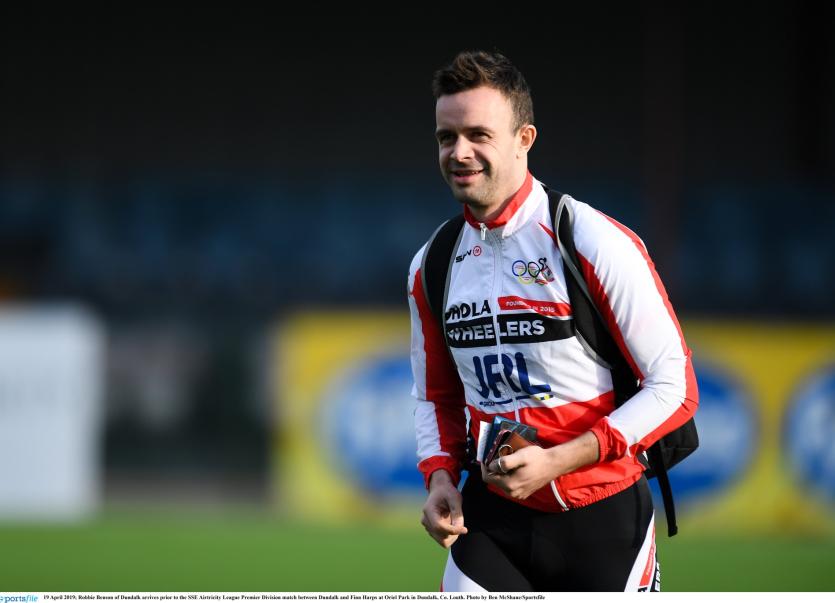 Robbie Benson felt Dundalk FC were as “comfortable” as they have ever been against long-time rivals Cork City on Friday night, with the midfielder reporting that he had no “ill effects” after just his third start of the SSE Airtricity League Premier Division season.

Benson fractured his fibula on the opening day of the league campaign at home to Sligo Rovers in February, and had his second start against Derry City in July before suffering a rib injury against Qarabag in European competition later that month.

The 27-year-old has battled back once again, and, having come off the bench in the previous two wins at UCD and Sligo, he was named in Vinny Perth’s starting XI for the visit of the lowly Leesiders to Oriel Park.

Benson played almost 70 minutes, before making way for Daniel Kelly, and he praised the contributions from the bench of both his replacement and match-winner Georgie Kelly.

“It was a great win. I thought we dominated the game from minute one. It’s probably as comfortable as we’ve had against Cork in all the years playing against them,” Robbie said.

“It always looked like the goal was coming – it’s just a pity we didn’t score more. I thought we could have scored three or four on another night.

“I felt good. I didn’t really have any ill effects of anything. As I said after the UCD game, there hasn’t been much training time for us, so I was a bit nervous coming into it in terms of how I’d last.

“But I felt good. If I had to play more, if they needed me, I would have been able to play more, that was fine. It just shows the strength of the squad, Georgie coming on and getting the winner for us.

“It suits the two of them, especially with their pace and the positions that they take up when teams get tired. It’s great to have those options off the bench. They can impress when they start, too, as they have done.”

The past week has seen Dundalk take full advantage of their two games in hand on second-placed Shamrock Rovers, who now trail the reigning champions by double digits with just six games remaining.

“It’s always hard to close out those wins as you’re going into the end of the season,” Benson said. “There are always sticky games at home that sometimes don’t go your way, but I think we all felt like the goal was coming, on the pitch when I was playing and then when the lads came on.

“If we had scored earlier, I think we would have gone on to score two or three.”

The 2018 double winners now prepare for another quick turnaround as they face Waterford in the Extra.ie FAI Cup quarter-finals at the RSC on Monday night.

Benson is wary of The Blues, who have put together back-to-back wins over Cork in the league and Hearts U21s in the Tunnock’s Caramel Wafer Challenge Cup.

But he says the holders will be “ready to rock” for their latest test, with Dundalk aiming to extend their unbeaten run in domestic competition which currently stands at 25 games.

“Going away anywhere in this league is always tough,” Robbie said. “Waterford had a great win in the cup they’re in, so they’ll be right up for it, a bit of confidence. It’s a big week for us, with the game on Monday and then the League Cup final on Saturday.

“There is no rest for us and I’m sure there’ll be a few more changes for Monday. Whoever plays, we’ll be ready to rock.”