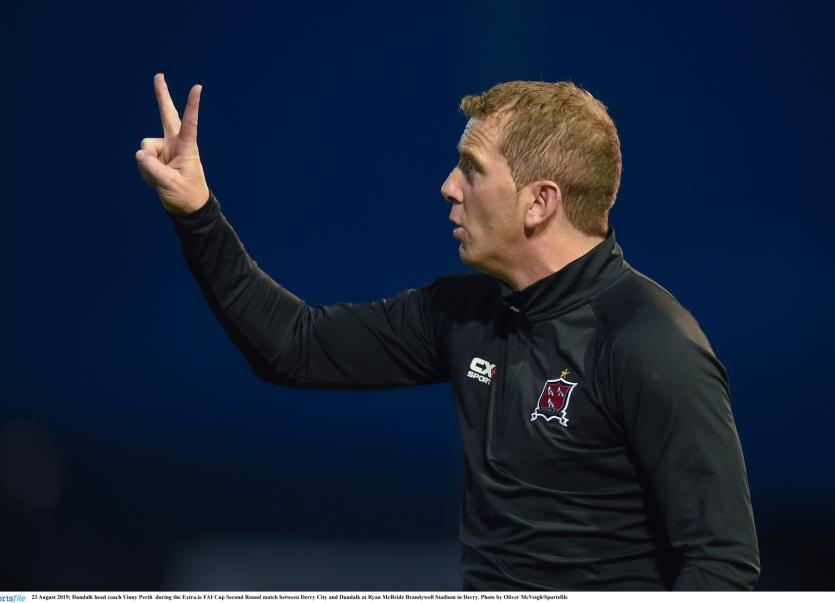 Dundalk FC head coach Vinny Perth has made retaining the league title a priority in his first season in charge of the club. (Pic: Sportsfile)

Vinny Perth says that Dundalk FC’s SSE Airtricity League Premier Division clash with UCD at Oriel Park on Monday night is “a bigger game” than they faced at Derry City in the Extra.ie FAI Cup on Friday, with the head coach stressing the importance of retaining the title.

The 2018 double winners are still dreaming of the 2019 domestic treble after eliminating Derry in extra-time, but talk of bagging all three trophies is not something that Perth wants to entertain.

Over the last couple of weeks, he has made it clear that Dundalk’s number one priority is being crowned Premier Division champions for the fifth time in six years.

The Lilywhites’ lead over Shamrock Rovers at the top has been cut to four points, but they have two games in hand. They can open up a seven-point advantage once again, for 24 hours at least, when UCD come to town on Monday (kick-off: 7:45pm).

However, while The Students may be bottom of the table and suffered a 10-1 loss at Bohemians in their last league outings, they shocked St. Patrick’s Athletic with a 3-1 win in the FAI Cup at The Bowl on Friday.

That result will certainly rid Dundalk of any complacency that they may have felt. Perth had a strong bench in Derry, with the likes of Patrick McEleney, John Mountney, Andy Boyle and Brian Gartland among his substitutes, and the head coach says that rotation is necessary.

“Monday is a bigger game than Derry,” Perth said. “We have got to retain our league title. Friday was our sixth game in 17 days and we head into UCD, which will be our seventh game in 20 days. I have to keep the team fresh and I will keep them fresh.

“I wouldn’t say the players all love it, but, at the same time, they’re starting to get used to it.”

Dundalk trained on Saturday and Sunday in preparation for Monday’s game, ahead of what is another hectic upcoming period. They make the trip to UCD next Friday before heading to Sligo Rovers on Monday.

Speaking after Friday’s game at The Ryan McBride Brandywell Stadium, first-team coach John Gill said: “We’re leaving here now at 11 o’clock at night – we’re in the gym in Dundalk in 12 hours to do recovery, and we’ll be in training on Sunday.

“All we’re focusing on now is just every game. UCD had a fantastic win tonight. This is going to be a difficult game for us. It’s certainly not a gimme, but it’s a game that we feel if we apply ourselves and the players play to their potential that we can get a win. It’s a massive three points.”

Defender Cameron Dummigan was in Derry on Friday night but was not part of the matchday squad and the club has reported that he will be absent again on Monday with an ankle injury. Left-back Dane Massey faces a late fitness test after picking up a knock in the North.

Midfield pair Jordan Flores and Robbie Benson went through intense fitness work before Friday’s game, and the latter is said to be in contention to make Monday’s squad.

While UCD – now managed by Maciej Tarnogrodzki – are into the FAI Cup quarter-finals, they have lost their last four league games, where they have shipped 22 goals. Their away form is particularly poor, collecting just a single point from the 39 available so far.

Dundalk are now unbeaten in 21 domestic games in all competitions. So far this season, they have beaten UCD in all three meetings, winning 2-1 and 3-1 in the two league fixtures – coming from behind on both occasions – and 3-1 at home in the EA SPORTS Cup.

The Students’ last victory over Dundalk was at Oriel Park in May 2013 when David McMillan (2) and Benson scored for them in a 3-2 win.