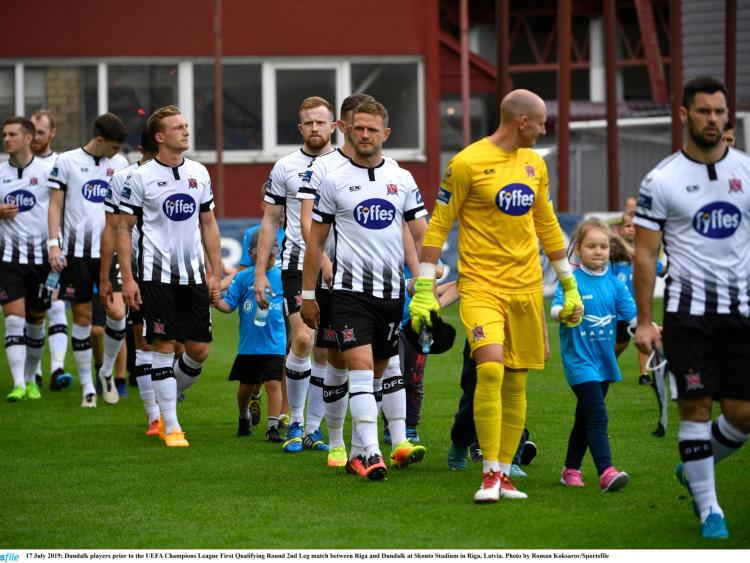 Vinny Perth stood to speak to the media last Wednesday night, as per usual. He subsequently went through the formality of chatting to the club’s TV stream, where his emotions hung on edge. There was a crackle in his voice and a glint in his eyes.

He spoke of there being doubts in Dundalk’s management arrangement and that they felt an element of pressure to secure the money-spinning win against Riga. Such was the level of detail they put into the game that they studied penalties of opposition players from six years ago.

“We’ve really given ourselves a chance by staying in the Champions League,” said Seán Hoare after the match. And, now, it really is a chance, the guarantee of four more games in Europe, ahead of possibly entering the play-off round of one or the other of Europe’s competitions.

The Qarabag game is opposite the circumstances that shrouded the nervy round one assignment, in that Dundalk enter as the overwhelming underdog.

“We’re boxing well above our weight at a European level again and full credit to everybody connected with the club.”

In UEFA’s coefficient chart, Qarabag sit shy of BATE, but well above The Lilywhites, hence the task at hand must be perceived as manageable, in spite of Azerbaijan’s kingpins having serial experience of continental competition’s group stages.

And having the first leg played at Oriel Park affords Dundalk the opportunity of at least keeping the tie alive before visiting the 31,200-capacity Tofiq Bahramov Republican Stadium in a week’s time. On a side note, the ground is named after the official who awarded ‘the ghost goal’ in the 1966 World Cup final.

Only one of the eight European encounters played at Oriel Park since 2014 have ended in defeat and, so, there is comfort to be drawn from this in that avoiding defeat must be the overriding objective of Perth and co.

But then there is the flip of the coin, the natural outcome of games on the Carrick Road have been draws. Five of the eight outings have ended level, three scoreless, with Dundalk having prevailed in two of the three ties that finished 0-0 at home.

That takes us on to the next primary motive, which must be to avoid the concession of an away goal. Perth’s choice of back four could be telling in this regard, though it would seem to largely pick itself, with Seán Gannon likely to flank Seán Hoare and Andy Boyle in the centre. The only open-topic lies at left-back, with Dean Jarvis and Dane Massey vying for the No.3 void.

In midfield, Chris Shields and Robbie Benson would be the natural selections in a sitting role, although finding a way to accommodate both Patrick McEleney and Jamie McGrath in the team may come at Benson’s expense. Especially with, as expected, Michael Duffy to come back in on the left flank and, possibly, John Mountney to get the nod again on the right. Patrick Hoban will, of course, lead the line.

Questions have been posed about Dundalk’s offensive efficiency following their failure to break Riga down over 210 minutes. But, like the half-filled glass, it’s the perspective you take. The Lilywhites never looked like conceding, either, and that bodes well moving into the Qarabag clash.

If they repeat their defensive stringency, they have a major chance of taking another scalp. A draw wouldn’t be the worst outcome tomorrow night.