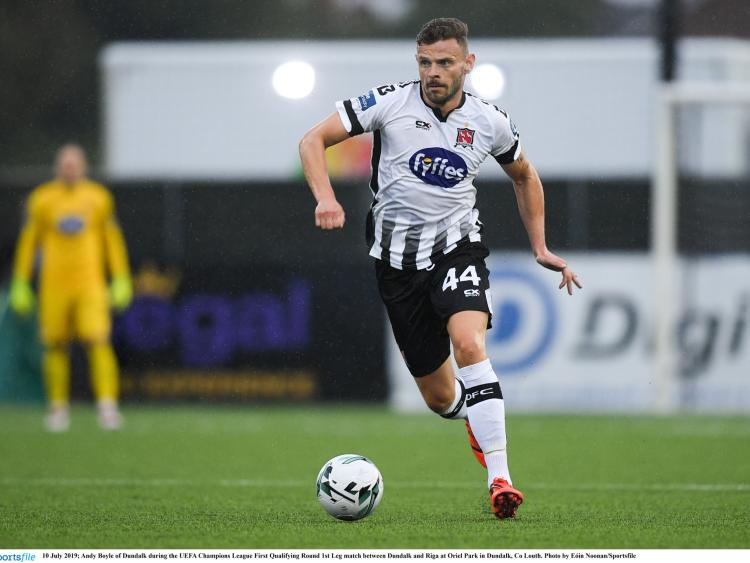 Andy Boyle believes playing away from home “might suit us a bit more”, after he admitted a “frustrated” Dundalk did not do enough to take a lead to Latvia. (Pic: Sportsfile)

Andy Boyle believes playing away from home “might suit us a bit more” after he admitted a “frustrated” Dundalk did not do enough to take a lead to Latvia in their UEFA Champions League first qualifying round tie with Riga.

The League of Ireland leaders made most of the running, but they did not seriously test goalkeeper Roberts Ozols, as Riga bagged a first leg scoreless draw that their game-plan had set out to achieve.

Clever in possession, Mihails Konevs’ players could have indeed brought a win back to the Latvian capital. Gary Rogers saved smartly from Oļegs Laizāns in the first half, while Joel Bopesu spurned a golden opportunity late in the day.

In 2016, Boyle was part of the Dundalk team that drew 1-1 with FH in Oriel Park before progressing on away goals after a 2-2 result in Iceland. And the centre-half says travelling for the decider “might play into our hands”.

“With the players we have in the team, you see we have plenty of pace and loads of ability. Playing away from home might suit us a bit more, than teams coming like Riga tonight and sitting in,” Boyle told The Democrat at full-time on Wednesday.

“I believe it’s a bigger pitch as well out there, so it might play into our hands, hopefully.

“We’ll be patient; you don’t have to score straight away. We’ll dust ourselves down tomorrow, recover and then we’ll analyse the game coming up. We’ve got a bit of time now for the game next week.

“Listen, these are the games that everybody wants to play in and it’s a game to look forward to.”

Reflecting on the overall performance, the 28-year-old added: “It was a frustrating night for us. 0-0 is probably a decent result for the home team when you’re playing at home first, obviously not conceding an away goal.

“I think on the night we probably didn’t create enough chances in the game. From a defensive point of view, it’s good to get a clean sheet and it gives us a good chance going out to Riga next week.

“I think they would have taken a 0-0 before the game. It was difficult; they played with two sitters and tried to kill the space. They were a bit of a threat on the counterattack. I think we were only okay and that probably sums it up.”

Boyle was only introduced at half-time, in place of Chris Shields, who suffered an unfortunate head injury late in the first period.

The appearance saw the defender grace the Oriel Park turf for the first time since October 2016, and he was delighted to be back in front of a large home support.

“I think it went well enough,” he said, after partnering Daniel Cleary in the second half to see out an important clean-sheet.

“Obviously, it’s not ideal when you come on at half-time; it was a bad knock that Shieldsy had. It was good to get back out there in front of the home fans. They gave us a great reception and I enjoyed it.”

On settling back in at the club, he concluded: “Everyone has been brilliant. Obviously, there are a lot of changes since I was last here. But it’s brilliant – it’s a club going places and I’m happy to be part of it.”

Boyle’s solid performance could earn him a starting role for the second leg, which takes place in Riga next Wednesday evening (kick-off: 5.30pm Irish time – live on eir Sport).