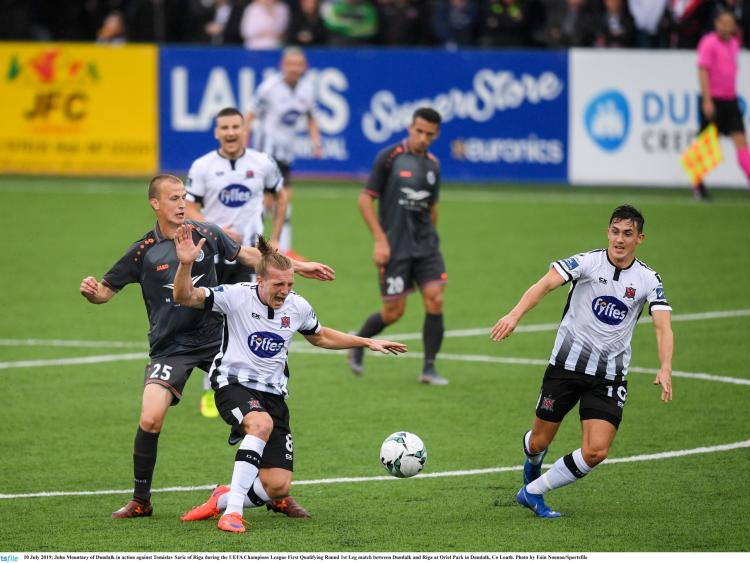 Riga got what they came for as Dundalk FC failed to fire in this UEFA Champions League first qualifying round first leg clash, which finished scoreless at Oriel Park on Wednesday night.

The home side, understandably, were more intent on winning the game. However – a Seán Hoare header apart – they did not seriously threaten Roberts Ozols’ goal.

Indeed, it was Gary Rogers who remained alert to keep the game scoreless in the 31st minute as he turned Oļegs Laizāns’ shot from distance around the post.

With Chris Shields lost to injury at half-time, Rogers denied Roman Debelko just after the restart.

Dundalk would go on to dominate possession, but, in truth, they never looked likely to take a lead to Latvia. They could have trailed, too, but a poor strike from Joel Bopesu late on let them off the hook. 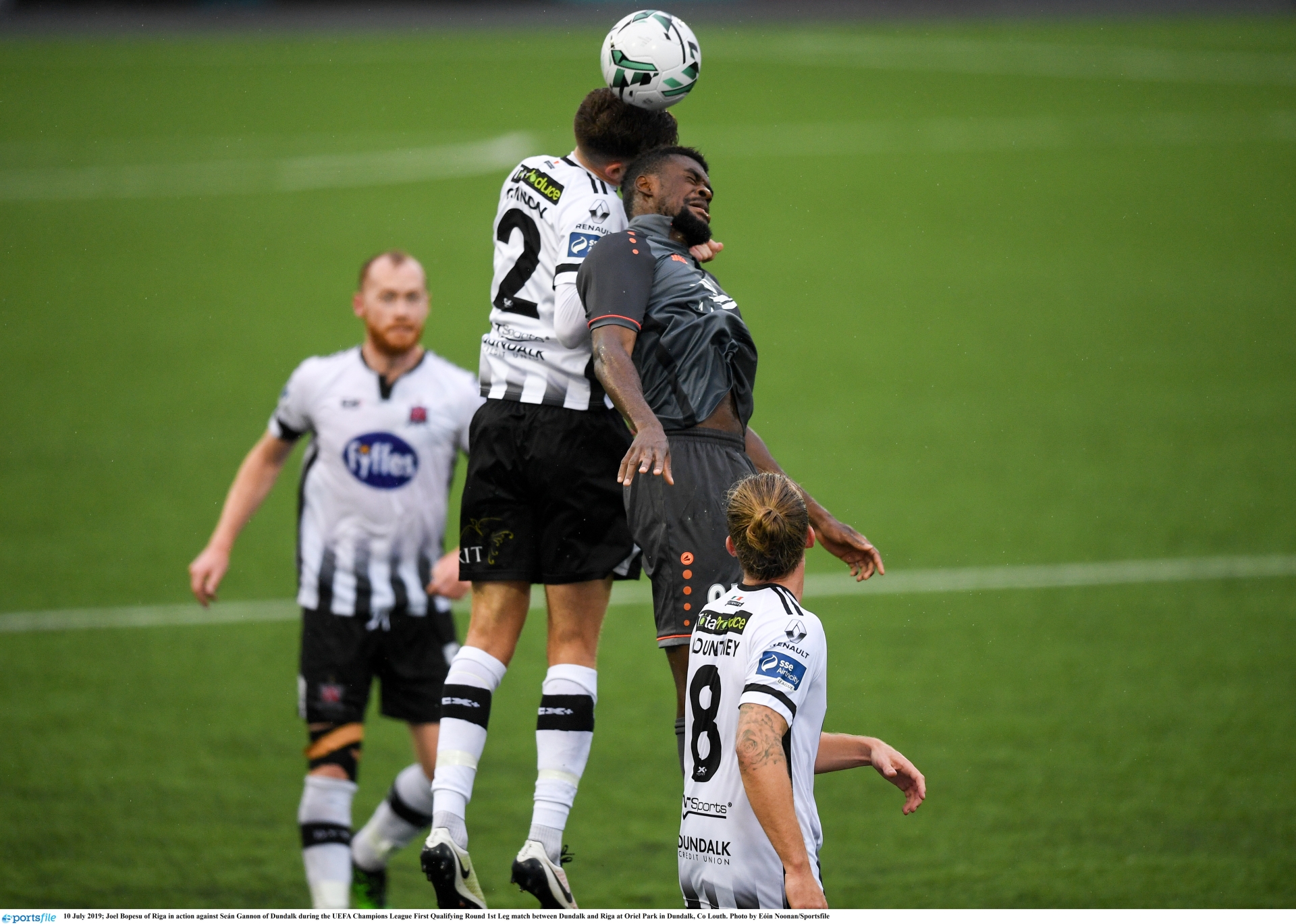 Vinny Perth had decided against calling upon the vast European experience of Brian Gartland and Dane Massey, with Daniel Cleary and Dean Jarvis preferred in the back four.

The Dundalk head coach made three changes from the 2-2 draw in Derry last Friday evening. Patrick Hoban, Jamie McGrath and Hoare were restored to the starting line-up, the latter joining Cleary at the heart of the defence.

Georgie Kelly, Robbie Benson and Andy Boyle were the unlucky trio to miss out, although Perth had indicated pre-match that he will utilise his squad across the two legs.

Riga were last in domestic action on Thursday, a home scoreless draw with mid-table Valmieras. They brought in four fresh faces to their side, with skipper Aleksejs Višņakovs, Herdi Prenga, Roger and Laizāns introduced.

There was no usual UEFA Champions League tune from the club’s public announcer Mickey Duffy – competition rules not allowing it until the Play-off Round. Dundalk, though, started on song, and a shot from their PA’s namesake dipped narrowly off target in the fourth minute.

The League of Ireland leaders were on the front foot, but Riga were holding their shape well. The breakthrough almost arrived from a set-piece midway through the half, with Duffy’s corner met by a towering header from Hoare which flashed over the crossbar.

The duo combined again moments later, this time from a free-kick on the right, with Hoare turning smartly in the box, but, under pressure, he shot wide.

The Latvians appeared happy to return home with a draw; on the half-hour, a rare foray forward ended with a weak strike from Roger.

However, Laizāns gave Rogers much more to think about in their next attack – after Patrick McEleney sloppily conceded possession in midfield – with the Dundalk No.1 stretching to turn a low 30-yard strike behind.

Before half-time, McGrath lifted a cross from the left into the centre for Hoban who headed harmlessly over. A miscommunication then led to a clash of heads between Cleary and Shields, with both players receiving treatment, as the teams went in scoreless – Riga probably the happier.

That knock to Shields saw him forced off at the interval, with Boyle brought in, as Hoare switched to a midfield role. 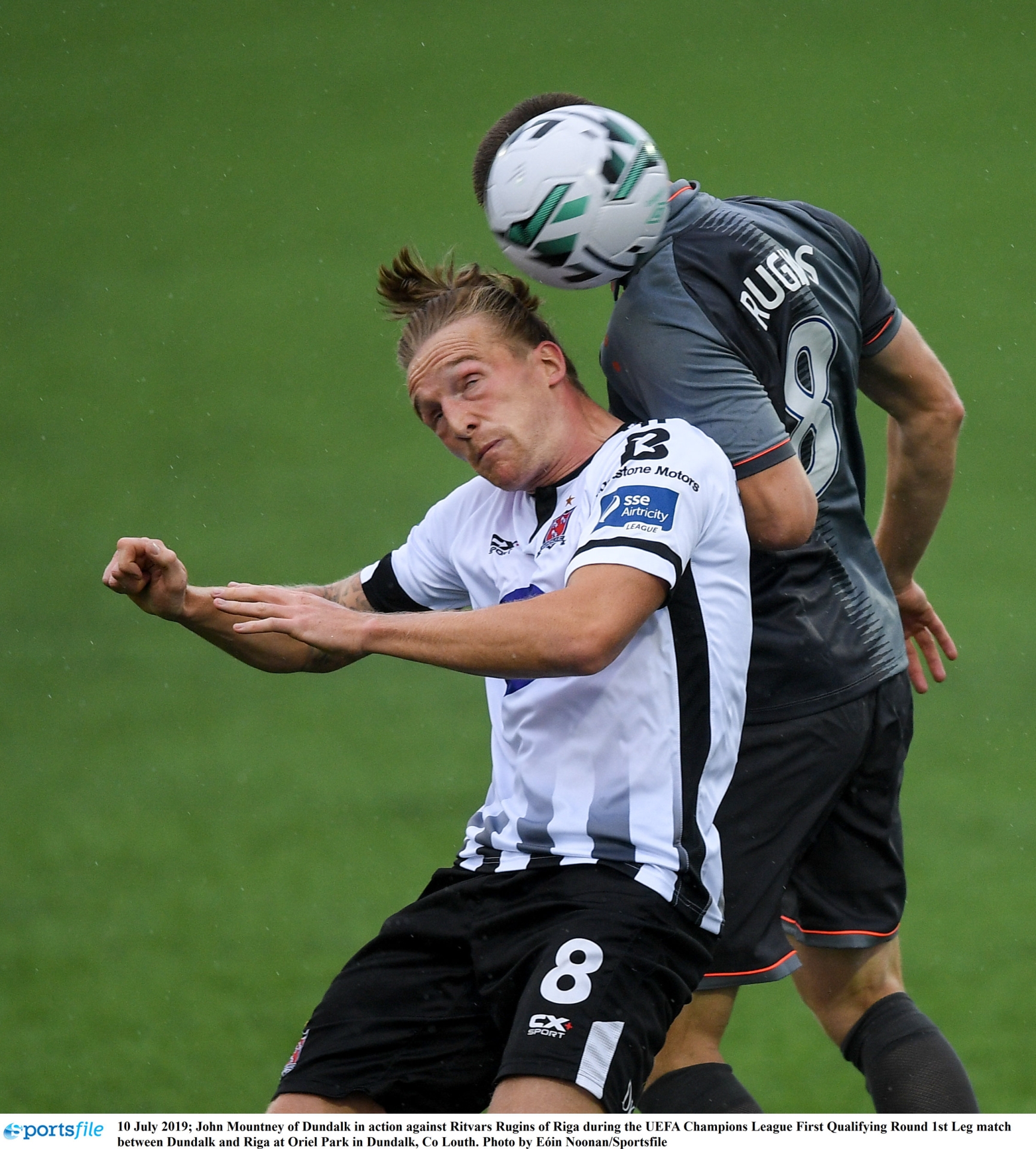 Just 30 seconds after the restart, as Dundalk rejigged, Riga almost took them by surprise with a strike from Debelko pushed behind by Rogers.

After an attempted shot, McEleney – wearing strapping on his leg – appeared in some discomfort. However, he signalled to the bench that he was okay to continue, with John Mountney instead replaced by Benson, approaching the hour-mark.

McGrath almost weaved his way through in the 62nd minute, but his end effort was straight at Ozols.

As Dundalk struggled to make inroads on the Riga rear-guard, there was a growing sense that the visitors may hit them at the other end. They nearly did so on 75 minutes when Bopesu got space on the left of the box, but, well placed, he shot poorly wide.

Daniel Kelly was brought off the bench, for McGrath, in one final throw of the dice by Perth. However, the Lilywhites were out of luck – although they did bag an important clean sheet ahead of next week’s return leg.

That means a score draw would be enough for Dundalk to progress in the Latvian capital, where the teams go head-to-head on Wednesday evening (kick-off: 5.30pm Irish time).