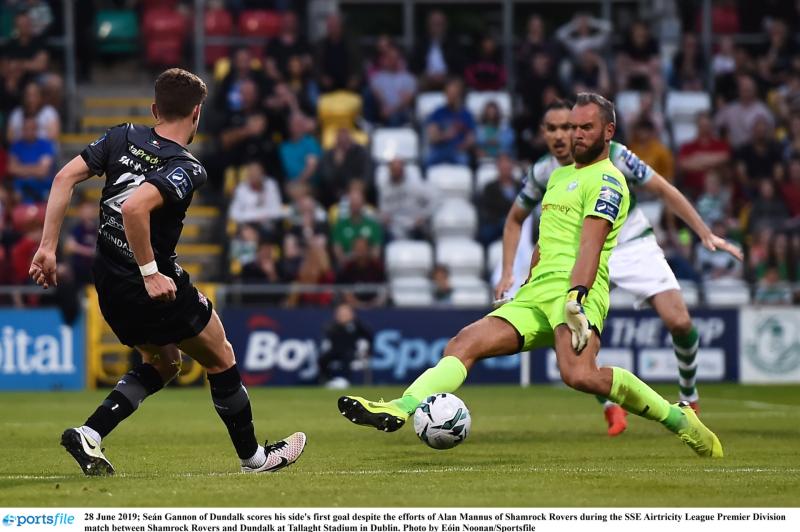 This Dundalk FC team must surely be regarded as the greatest in the history of Irish club football, containing some of its best ever players too.

Friday night’s victory over Shamrock Rovers was typical of the side in many ways. They can win beautifully and emphatically, as they have done on so many occasions, or use grit to grind their way over the finishing line, as was the case in Tallaght.

They continue to master both worlds and, worryingly for the rest, show no sign of letting up.

Look at the team’s longevity. In five years, the central players have remained, or at least been replaced by those of similar stature. In particular cases, some of the men to depart have returned after relatively short exiles - Patrick Hoban, Patrick McEleney and most recently Andy Boyle.

The heralded 2014 title-winning back four, of Seán Gannon, Brian Gartland, Boyle and Dane Massey, are still at the club, while Gary Rogers - a double double winner - has fought off competition year on year to hold the No.1 berth.

In midfield, Chris Shields, well, what more is there to say. He’s just a model example of consistency, while Hoban continues to provide the goals, having replaced the man whom he vied with five seasons ago, David McMillan, a year-and-a-half ago.

John Mountney, another who just seems to be getting better and owes nothing to any patron of the club. Robbie Benson, a hero of 2016, is still there. Michael Duffy has taken the left-wing mantle of Daryl Horgan and, if possible, matched the Galwegian’s legend. McEleney, so good he came back for more.

Trying to compare teams across generations is a thankless exercise. It’s all about opinions and people of various ages will always contend that the side they doted on are the benchmark. Of course, styles of play, facilities, etc also blur the guidelines.

But, coming on the back of a boom and bust era, where success was short-term and based on whoever was willing to chuck a fortune at their team, Dundalk’s uprise has been pure. Rags to riches is a quip that reluctantly has to be used. In one of his first interviews when taking over, Stephen Kenny said: “We’re starting with nothing”. He finished with quite a bit.

Since winning the club’s first league title in 19 years, in 2014, Dundalk have won two doubles, another league, a pair of EA Sports Cups and qualified for the Europa League group stages. They’ve broken points records, goalscoring records and records’ records…

In the last six seasons, prior to the Waterford game, The Lilywhites have played 190 league matches and their win rate is 71 percent, or 135 wins. Just 12 percent have been defeats. An astounding 437 points have been accrued from a possible 570.

The truth is, Dundalk’s success hasn’t been - or won’t be - based on exorbitant financial input. It’s been self-driven, self-funded. The team was built rather than bought. Gannon - one of the country’s best players over the same period - couldn’t get into the team at Rovers or St. Patrick’s Athletic before his move north. Gartland went from part-time club to part-time club. Boyle was no more than a solid player at Shels. Nobody could have predicted Massey’s rise to brilliance in his days at Bray. Shields, in 2012, who’d have mapped the path he’s taken? Hoban and Mountney were little known prior to their moves. Duffy, who knew what to expect?

Yet they’ve become League of Ireland legends, possibly entrants on to an all-time XI.

People can point to the American money the club now has, the purchase of players from abroad, those with a much higher profile, Jordan Flores and Seán Murray to name but two, and suggest that a domestic monopoly is in the process of being bought.

But, frankly, that’s simply disingenuous. Look at every great team and club, the success doesn’t continue forever. It’s the core of the current team and the players in it that have transformed a club and driven it towards the smell of another league crown, which would see them close to within three of Rovers’ record 17.

And, with many of the integral members still in their peak years, who’s to doubt that Dundalk won’t be breathing down the Hoops’ neck in that regard by the time this star generation begins to wane.

The pick of the era? Well, they say you’re only as good as your last game. Gannon? The best? It’s difficult to argue.