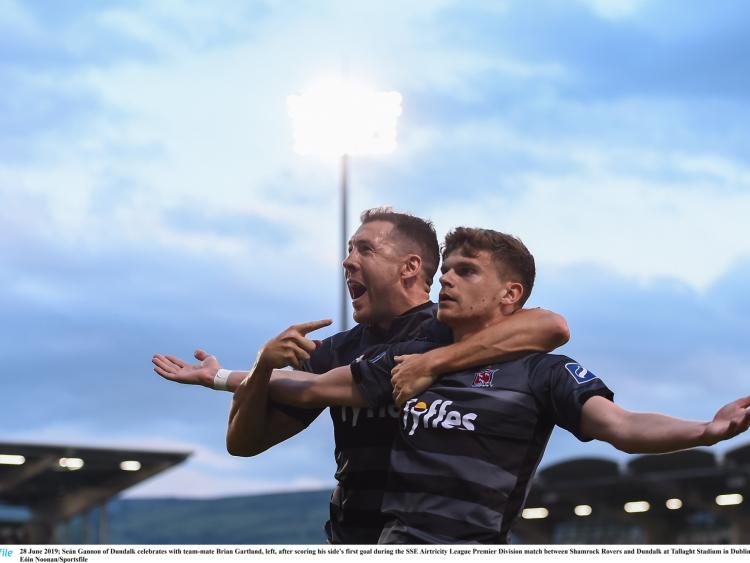 Seán Gannon kissed the crest and Shamrock Rovers may have kissed goodbye to their title hopes, as Dundalk moved eight points clear at the top of the SSE Airtricity League Premier Division with a brilliant 1-0 win in front of over 5,000 people at Tallaght Stadium on Friday night.

Dundalk had been out of action for 20 days and they looked ring-rusty here in a first half that was completely dominated by the hungry Hoops.

Stephen Bradley’s side knew the importance of landing a punch in this title fight, and Dan Carr proved a constant threat in the opening period with his pace.

The defending champions – who had a week longer rest than Rovers – struggled to find their rhythm. However, it still it took 37 minutes for them to seriously come under pressure.

It was Carr who provided the cross and Ronan Finn drove the ball under Gary Rogers only for Dane Massey to get back and clear off the line. Moments later, Jack Byrne rattled the underside of the crossbar, with Dundalk relieved to go in level at half-time. 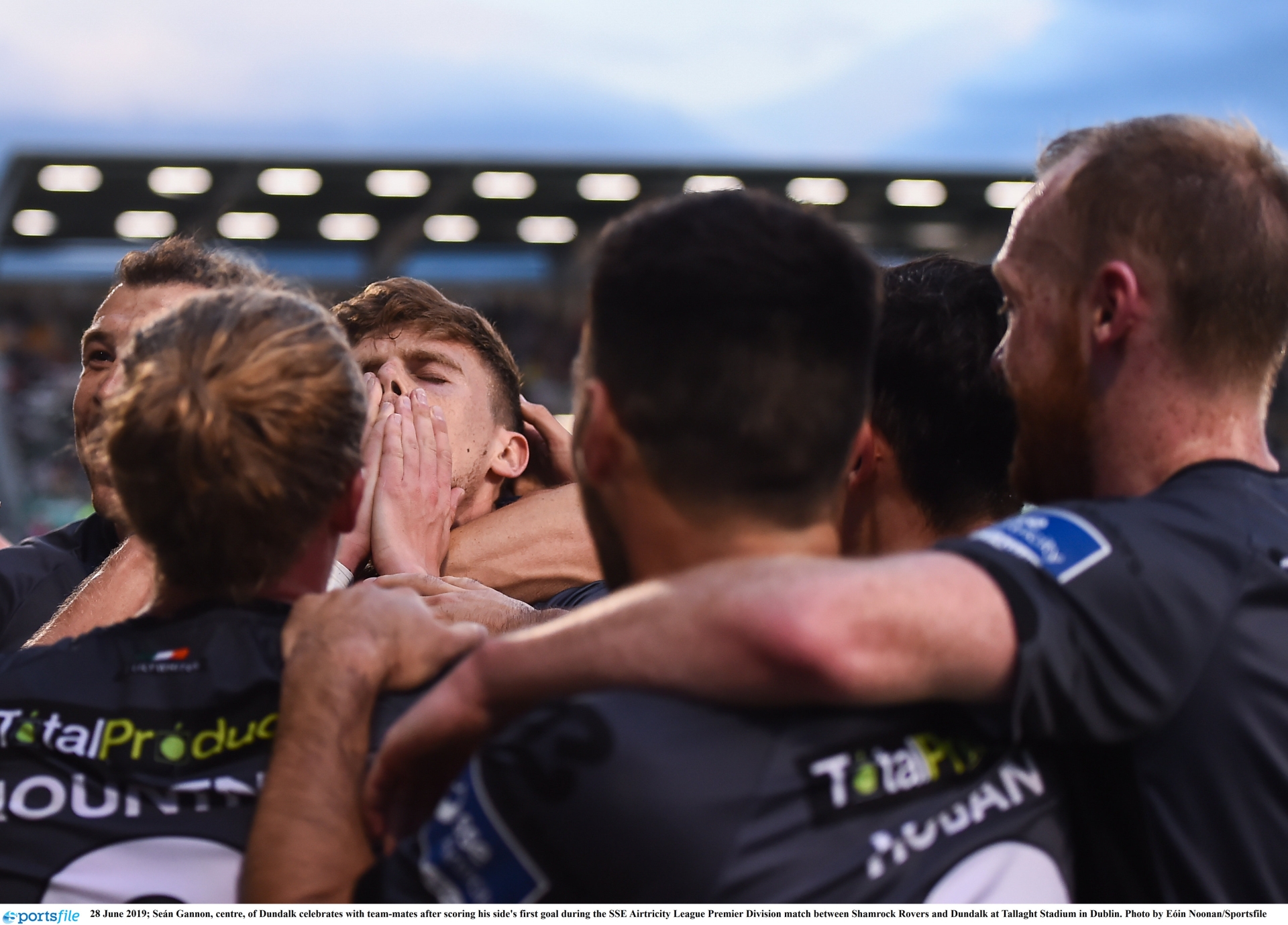 Dundalk started the second half on the front-foot, but they were lucky to still have 11 men on the pitch on the hour-mark when Gary Rogers took out Trevor Clarke as last man. Referee Rob Harvey flashed only a yellow card, with the home side baying for blood.

The Louth men had created little of note throughout. However, with just over quarter-of-an-hour remaining, Jamie McGrath unlocked the door, just ten minutes after coming off the bench following a long injury layoff.

The young midfielder provided the pass for Gannon to race onto in the box, and his first goal of the season may prove one of the team’s most important this year as it fired them further clear at the top of the table. 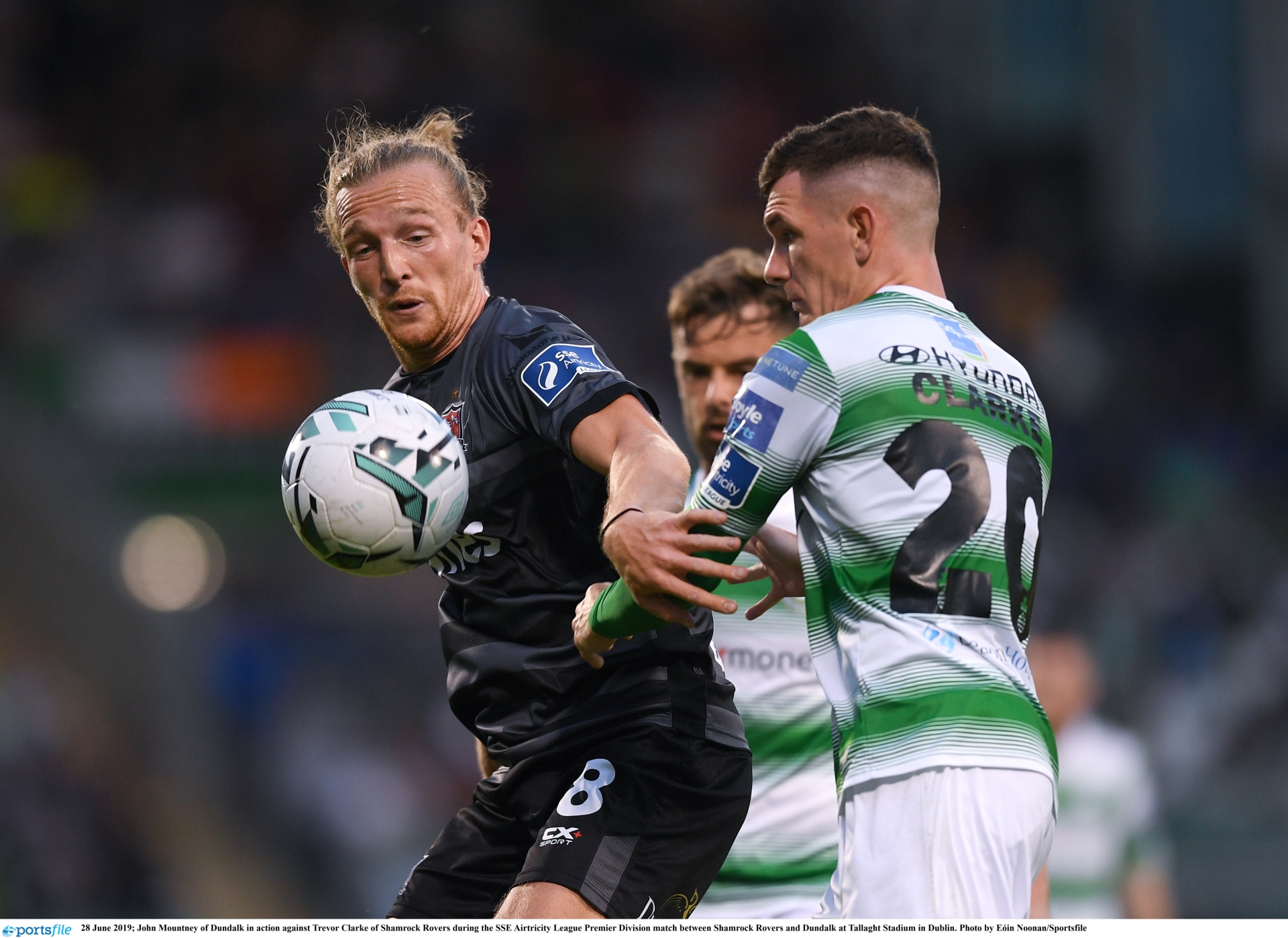 Head coach Vinny Perth had made two changes from Dundalk's last outing three weeks ago, a 3-0 win at Finn Harps.

The suspended Daniel Cleary and injured Jordan Flores were replaced by Seán Hoare and Seán Murray, the latter making his first appearance in five weeks.

Dean Jarvis was also serving a one-match ban and missed out, with a welcome return to the bench for both Robbie Benson and McGrath following long-term injuries.

Rovers shaped up with a more familiar look than that which lined up at Oriel Park in April as an experienced defence took to the pitch, although they were without the influential midfield presence of Aaron McEneff. 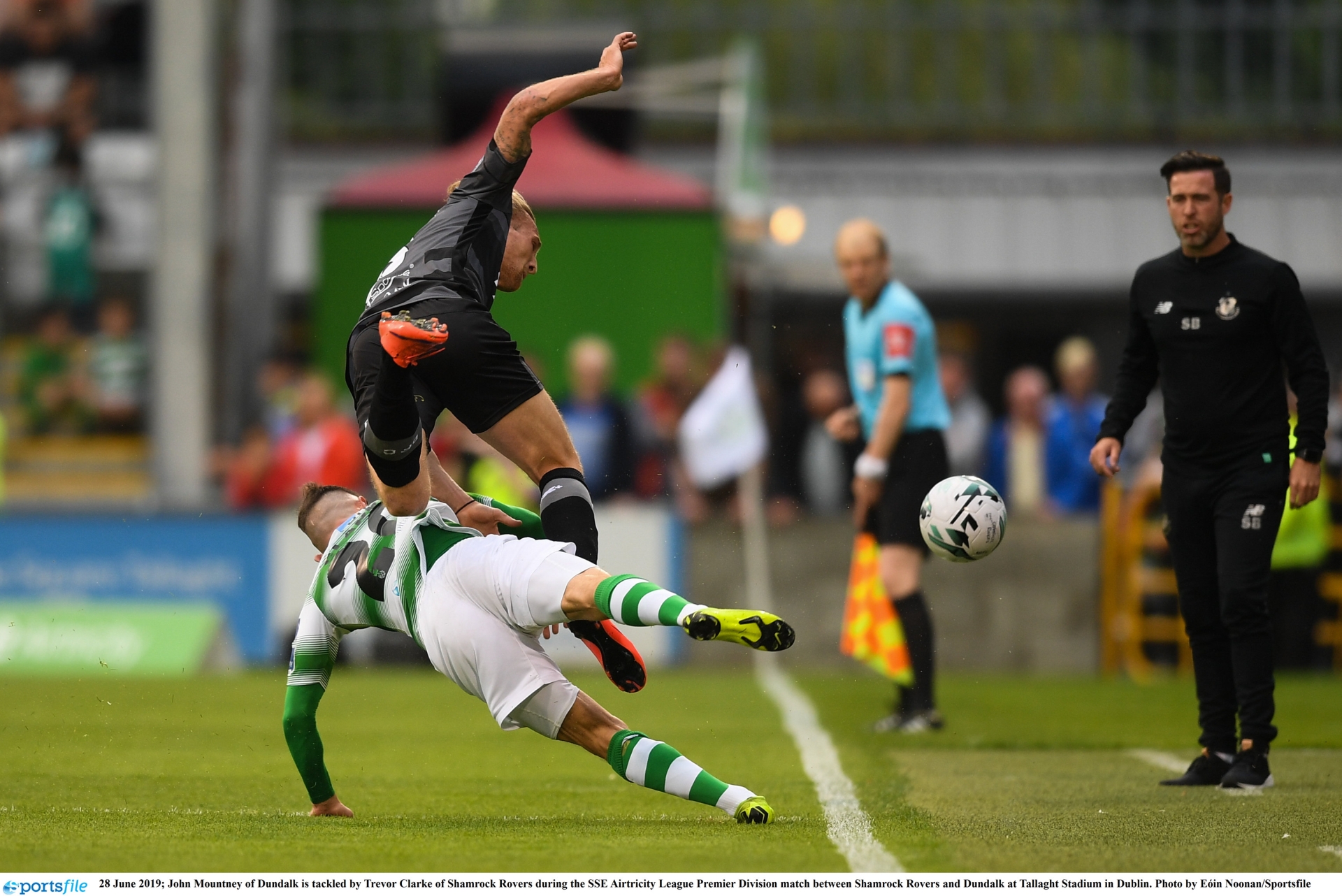 Dundalk looked out-of-sorts. A promising attack on 10 minutes was as good as it got in the first period. Patrick McEleney glided through midfield and played a through ball for Patrick Hoban, but Lee Grace covered well to stop the record goalscorer’s route.

Clarke was then booked for a meaty challenge on John Mountney close to both dugouts, but still that failed to ignite the fire between these rivals.

Rovers were enjoying plenty of possession but their final pass was letting them down, with Hoare and Brian Gartland dealing well with Carr’s runs in behind.

Dundalk offered little going forward, with a surging run from Gannon just past the half-hour cut out by Greg Bolger, who impressed in midfield.

The only first-half shot that Perth’s players could muster was from their right-back, who was unhappy with Michael Duffy’s set-up pass.

Rovers then moved up a gear as they attempted to gain the initiative before the interval, and they should have got their noses in front. Carr’s cross from the left was met by Finn at the back post, but while his shot beat Rogers, Massey got back brilliantly to block the ball behind.

A minute later, Byrne was afforded too much space 25 yards from goal and he unleashed a dipping shot which beat the ‘keeper and crashed back off the underside of the bar.

Dundalk had a shout for a penalty when Gannon’s cross was blocked down by the arm of Seán Kavanagh, but that would have been a harsh call on Rovers. 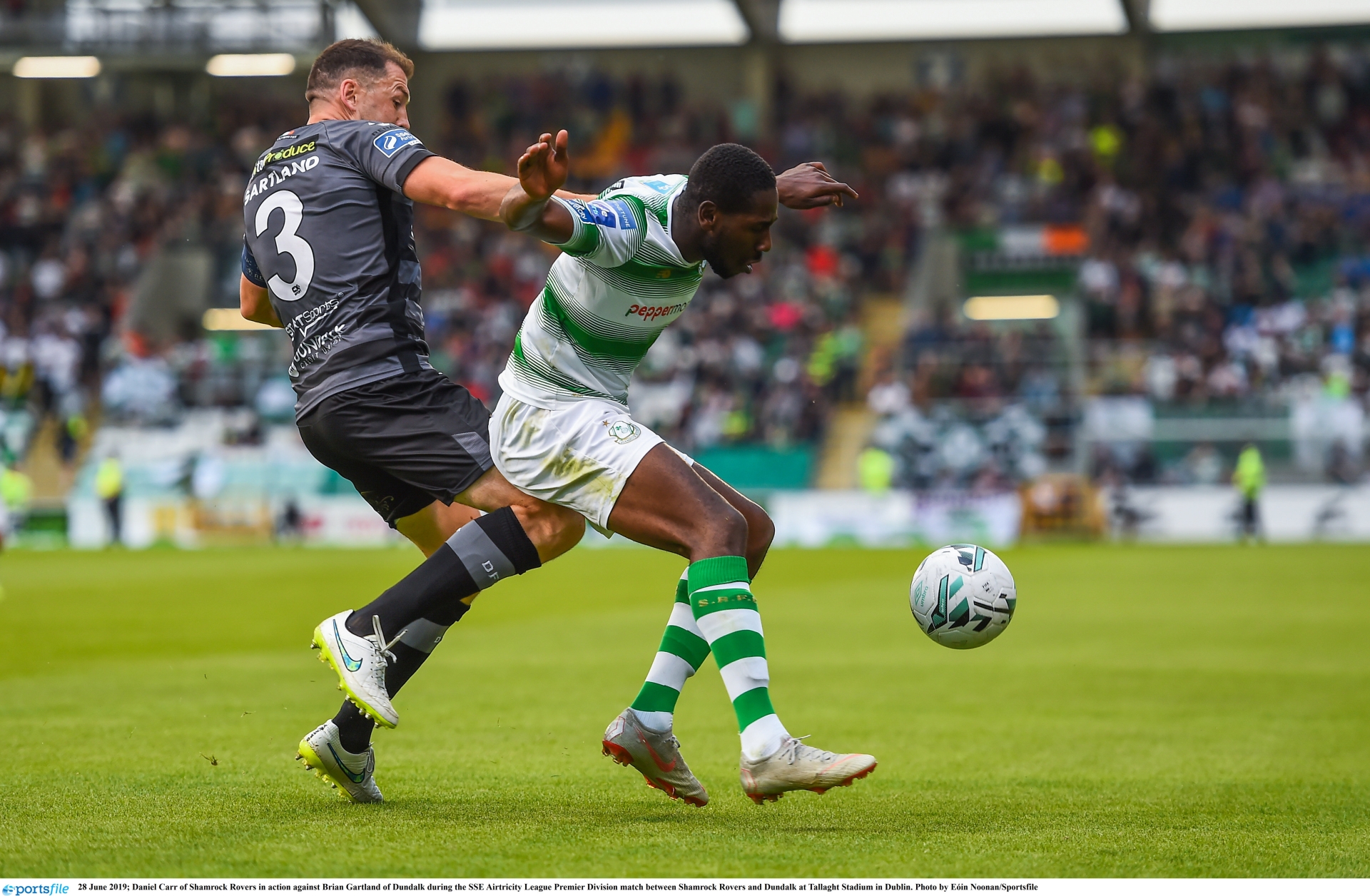 The Lilywhites started the second half with intent. After McEleney recovered from a nasty challenge from Finn, it took a brave block from Joey O’Brien to deny Hoban’s powerful strike in the box on 52 minutes. McEleney then struck the side-netting from a tight angle.

On 61 minutes, there was huge controversy when Rovers broke clear on goal and Clarke was upended by Rogers as he looked to go past him. The Dundalk No.1 was the last man, but the referee dished out only a caution, much to the annoyance of the hosts.

McGrath was then introduced by Perth, while Carr departed for Aaron Greene, as the game threatened to peter out.

However, the breakthrough arrived just seconds after Greene’s arrival. McEleney headed down to McGrath, who waited for the run of Gannon into the area, and the defender produced a clinical finish beyond Mannus. The former Hoop kissed the Dundalk crest as he ran towards the large travelling support to celebrate.

In a further boost, Benson came in for his first appearance since the opening day of the season.

On 81 minutes, Dundalk had an opportunity to kill the game off when Hoban had time and space. With Duffy to his left, he decided to take the shot himself from 20 yards, with Mannus collecting comfortably.

As Rovers pushed forward for an equaliser, they were leaving gaps at the back, and Duffy was the next to threaten on the break but he fired wide from a difficult angle.

Rovers almost got back on level terms on 85 minutes but Greene dragged a shot poorly wide from 10 yards, with their one-time 13-point lead now an eight-point deficit.