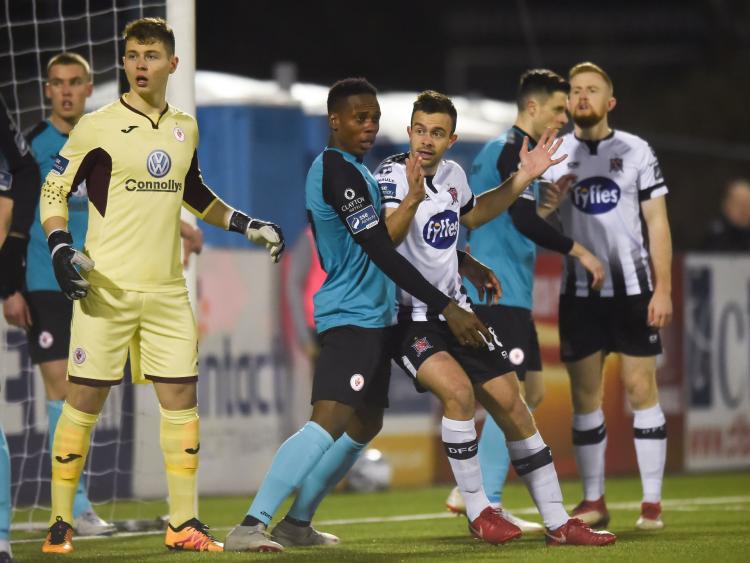 Vinny Perth wants his Dundalk train to keep on rolling and he has admitted his frustration that Stephen Kenny’s Toulon Tournament excursion with the Republic of Ireland U21s means they will be stopped in their tracks ahead of schedule.

Perth’s side have put together a 10-match unbeaten run – winning nine of those – to sit proudly at the top of the SSE Airtricity League Premier Division, above Shamrock Rovers on goal difference, just past the midway point of the season.

Incidentally, Ireland’s involvement in France will give Dundalk the opportunity to move three points clear at the summit when they take on Sligo Rovers at Oriel Park this Friday evening (7:45pm), as the Hoops’ trip to Waterford has been postponed.

Two Waterford and three UCD players have been called up by Kenny, with each of those clubs now having three fixtures called off. One of those is Dundalk vs UCD on June 14, meaning that after this weekend, the Lilywhites will go 31 days without a home outing, and 20 days without a game at all due to the mid-season break.

The scheduling has annoyed Perth, who believes his in-form players are close to putting a side to the sword.

“We’re starting to look a little bit better and a bit more like ourselves now,” Perth said. “I think we’re very close to what I want us to be. I’m a dreamer, maybe, but I think we’re going to beat some side fairly soon in terms of convincingly. We’re playing good football and this team is in a good position at the moment.

“It’s a crazy month ahead in terms of games off and the break. In one sense, it will give us a chance to get people back and fit. In the other sense, we don’t want the games to stop. We’re in a good position, we’re in a good flow and we’ll just keep going.”

Asked for his views on the postponements due to U21 action, Perth added: “It’s great for the individual players, it’s a fantastic achievement by Waterford and in particular UCD to have their players in the squad. Bohs are unlucky not to have a couple more.

“We need to be careful. Our league is of the utmost importance. It’s not good, but we are where we are with it. We need to move our league back to one game a week with the odd midweek fixture and just get it done as quickly as you can.

“I believe the clubs in this country are in such a good state at the moment that they can handle a 40-week season if they need. I could be wrong on that, but I think the Premier clubs are in a good position, so we need to push for that for the start of next season. All we can do is just get on with it and deal with what they give us.”

Dundalk are yet to beat Sligo this year, with an opening day 1-1 draw at Oriel Park in February followed by a 2-1 defeat at The Showgrounds in April.

That was Dundalk’s last loss, but they will remain very wary of Liam Buckley’s side who have also surprised high-flying Shamrock Rovers and Bohemians in recent weeks, and enter this Friday on a seven-match unbeaten run.