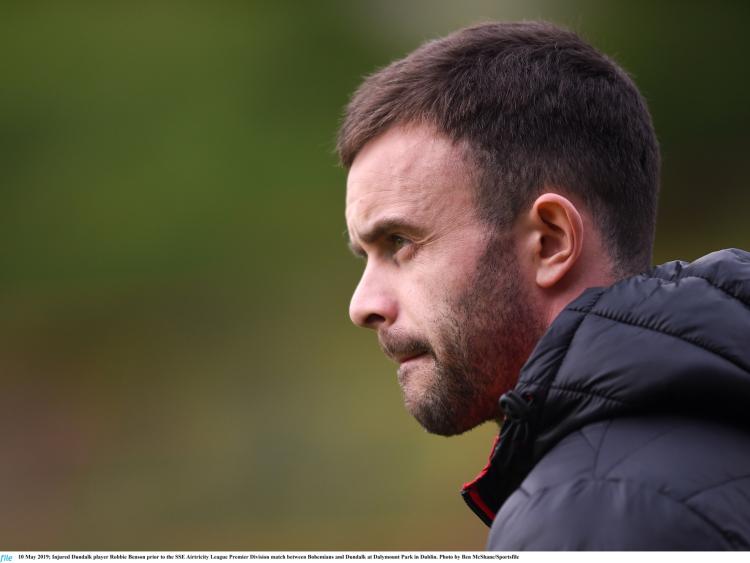 The Athlone man sustained a broken leg in the league opener against Sligo Rovers in February and hasn’t played since.

He has watched from the stands as the Lilywhites have pieced together a 10-match unbeaten Premier Division run since losing against this Friday night’s opponents, Sligo, at The Showgrounds on April 12.

Speaking in the aftermath of last Friday’s dramatic late win over St. Patrick’s Athletic, Benson confirmed that he would be available for selection “after the break, for sure”.

Should that be the case, the 27-year-old could be in contention for the June 28 clash against Shamrock Rovers, which follows a three-week hiatus in the season, with the Lilywhites’ game versus UCD on June 14 having been postponed.

“I’m doing alright, it’s been tough; the longest period I’ve had on the sidelines,” Benson said.

https://t.co/LWeQRIKo4z@DundalkFC midfielder Robbie Benson spoke tonight about the injury that has kept him out of football since January. He says he will b returning at the beginning of July . pic.twitter.com/I34MeHGil3

“I’m doing everything I can to get back and in the second half of the season, hopefully, I contribute in whatever way I can and just have some sort of impact.

“When it happened originally I was just happy that the whole season wasn’t going to be over; I was just looking at the positives.

“The first five or six weeks were relatively okay, but it’s when you’re trying to get back on a target and you feel pain or when you try to get on to the next stage and you feel pain: it’s tough.

“But the lads here are great, the medical staff, and I’ve a good support network.”

Pressed on what his hopes are for the remainder of an injury-ravaged campaign, Benson added: “There is no real rush to get back, the team is doing very well.

“When I am back I’m just going to be happy to have some sort of contribution, to come on and have an impact.

“The thing that’s keeping me going is that thought of coming back, and in a game where I can contribute to a win, and the feeling that I’ll have when it happens."