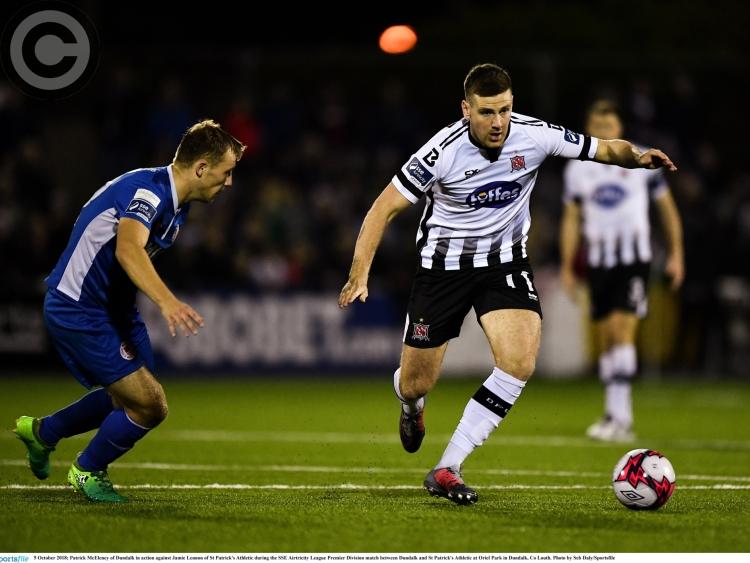 Gary Rogers and his defence will be keen not to offer up any more gifts to St. Patrick’s Athletic as Dundalk FC look to make home advantage count between now and next month’s mid-season break.

The reigning champions were only undone at Richmond Park in early April after an unfortunate Daniel Cleary own-goal late in the first half. They were also beaten in Sligo a week later to fall 13 points off the pace. However, since then, their red-hot form has propelled them into pole position to retain the title.

In particular, Rogers and his back four have been impressive, with clean sheets collected in three consecutive wins on the road at Waterford, Bohemians and Cork City.

Now – having beaten Bohs at Oriel Park on Monday night – they can look forward to four of their next five games being at home. That includes next Monday’s EA SPORTS Cup quarter-final tie with UCD.

However, first up is this Friday’s SSE Airtricity League Premier Division visit of the Saints, who Rogers made over 100 appearances for during a three-year spell between 2009 and 2011. Whatever the opposition, though, Dundalk’s focus is clear.

“Every game for us is the same,” Rogers said. “We approach them all the same – we try to stamp our authority on the game, our playing style and try to win the match. Every week, that is always the approach. But we know that we have to work really hard in order to pick up those points, and that’s what we will continue to do.”

Rogers has been in fantastic form in recent times, to ensure he retains his place ahead of Aaron McCarey. The 37-year-old has produced crucial saves at key moments in matches, in the knowledge that his frontmen will do their job.

“That’s the name of the game for goalkeepers and defenders,” he added. “We’ll be trying to keep as many clean sheets as we can and try to give the boys a platform to go and score – hopefully, that should see us through and get the points.

“Generally, over the last number of years we have been very good defensively and keeping plenty of clean sheets. We want to continue that trend, and I think if we can do that, you would always fancy our boys to nick a goal somewhere with the quality that we have in the side.”

Pat’s have had a mixed season so far, with a poor start followed by an upturn in fortunes, albeit against the league’s poorer outfits. Harry Kenny’s side have dipped again recently, and they are without a league win at Oriel Park since Dundalk’s disastrous 2012 campaign. In the last two years, they have been on the end of 5-0 and 6-0 defeats at the venue.

Friday’s game kicks off at 7:45pm, with tickets available online 24/7 and at the club office during regular hours.