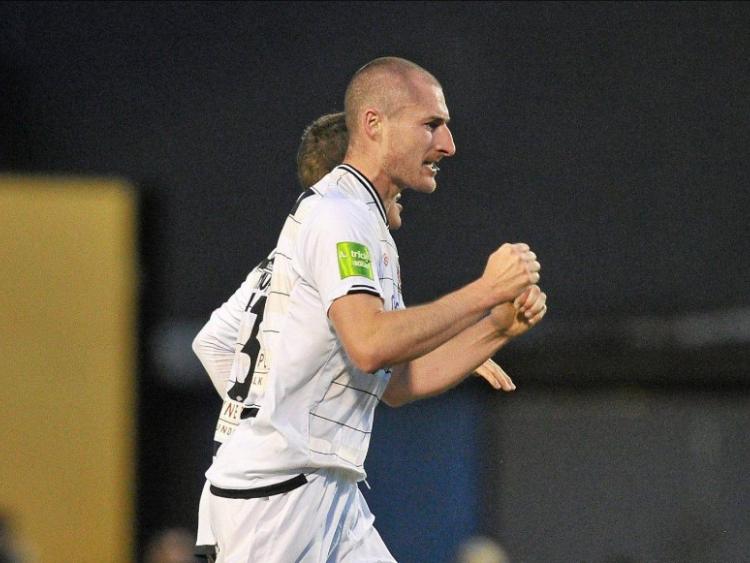 A game which saw Bohemians enjoy the better chances and much of the play, the Lilywhites struck with 10 minutes to go, Greg Bolger’s whipped, diagonal free-kick into the area being met by the head of the former Bohs player, who beat Chris O’Connor with his directed effort.

Hawkins had won a league title with the Gypsies in 2002, but led a resolute Dundalk backline here which included Simon Madden and Nathan Murphy in the full-back positions.

⏪ #ThrowbackThursday to 2️⃣0️⃣1️⃣1️⃣, when Colin Hawkins’ bullet header gave the Lilywhites their first win over @bfcdublin at Dalymount Park in 18 years.

FRUSTRATION
Bohs boss Pat Fenlon was forced to watch the game from the TV gantry, though his side appeared unperturbed, creating chance-after-chance, with Killian Brennan going close in the early stages.

Michael Hector had a fine game for Dundalk, breaking up several passages of play, and he almost made his presence count offensively when nodding Daniel Kearns’ delivery goalwards - O’Connor making a sharp save.

However, from there to the break, the hosts took control and had it not been for inspired goalkeeping from Peter Cherrie, Dundalk would have fallen adrift.

Ex-Lilywhite Anto Flood had the custodian at full stretch to parry his effort over, while Chris Forrester forced the ’keeper into action with a vicious 35-yard drive. Another Flood effort also brought the best out of Cherrie as frustration in the home ranks mounted.

TIMELY
Foster would have been happy to get his charges back to the dressing room with their clean sheet intact. However, pressure on Dundalk’s goal mounted after the break.

But even when Bohs did find a way past Cherrie, midfielder Bolger was on the cover to spectacularly clear off the goalline, while the home team rattled the side netting soon after with the Jodi Stand sensing a breakthrough was nigh.

Hawkins then took centre stage, firstly making a last ditch tackle to deny Flood a certain goal, before, in what was their first meaningful foray forward of the second half, Jason Byrne pulled a fine stop out of O’Connor, with the lively Kearns providing the cross.

And the winger was again involved as Hawkins, somehow, won it for the Lilywhites, to the delight of a hearty travelling contingent.

THE SEASON
Dundalk finished seventh in the 10-team Premier Division, winning 10 of their 36 games and closing on 44 points. Bohs were fifth, 16 points clear of the Lilywhites.

Meanwhile, Shamrock Rovers made it two league title wins on the trot, ahead of Sligo Rovers and Derry City, in second and third.

How long can Covid-19 live on cardboard, plastic and other surfaces?