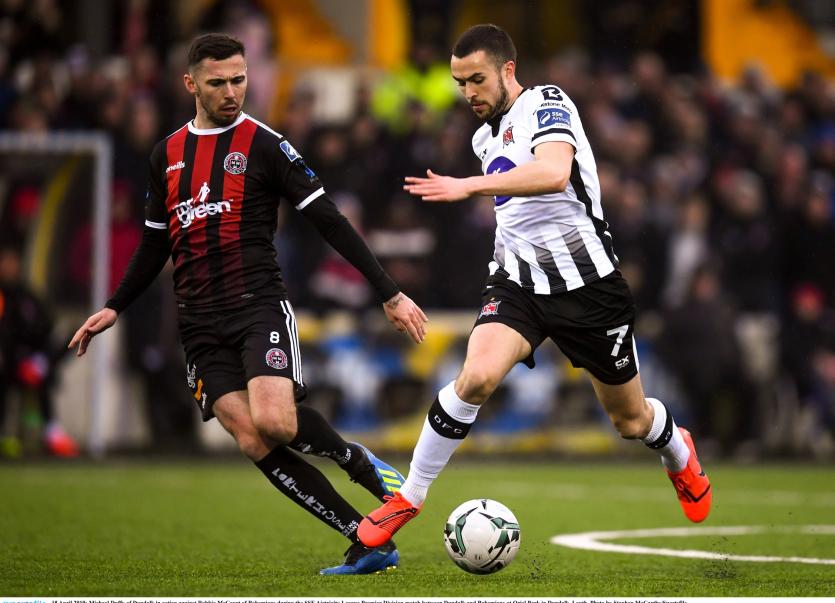 Michael Duffy of Dundalk in action against Robbie McCourt of Bohemians during the SSE Airtricity League Premier Division match between Dundalk and Bohemians at Oriel Park. (Pic: Sportsfile)

What a difference a day makes. Just 24 hours after throwing away two points against Derry City, Dundalk FC were left licking their lips at the possibility of reclaiming top spot in the SSE Airtricity League Premier Division this weekend following the latest stumble on Shamrock Rovers’ increasingly rocky road.

The leaders were beaten for the third time in four outings as Sligo Rovers struck two crackers at The Showgrounds on Saturday night. It was that very venue where Dundalk fell 13 points behind the Hoops less than a month ago.

Now, that latest result has presented an opportunity for Vinny Perth and his players to turn the tables, as they can rise to the summit on goal difference. The head coach will be determined to take it.

The reigning champions have an identical record to this time last year (W9-D4-L2). Then, it was their form following the early May defeat in Waterford that ultimately won the title. After losing at the RSC, Dundalk embarked on a 13-match winning streak, which left Cork City in their wake.

That was at the forefront of Perth’s mind as he looked forward to the challenges that lie ahead. The first of those is currently one of the hardest in Ireland, as they take on third-placed Bohemians at Dalymount Park on Friday night (7:45pm), in what is the chasers’ game-in-hand on Rovers.

The Gypsies lost their unbeaten home record to Cork at the weekend, and will also be keen on revenge after a controversial late loss at Oriel Park last month.

Perth will have Seán Hoare available - the centre-half’s suspension kicks in for the trip to Leeside next week - but he must plan without record goalscorer Patrick Hoban, who is likely to serve only a one-game ban for his dismissal against Derry.

“Pat has been a real leader for us, but it’s time now for Georgie Kelly to step up to the plate and we’re fully confident he can,” Perth said. “We’re in a good place. We have a good squad and it’s going to be tested.

“We were disappointed not to win last Friday; we want to improve on where we were last year. If we had won, we would have more points than we did last year, but we’re in the same position. It’s time for us to go on a run now and get going.

“We have 16 points out of 18, so it hasn’t been the worst six games in a row. Too many in a short period of time will definitely catch you out. But, look, there are as many positives around here as there are negatives - we can only control ourselves and that’s all we’re going to do.”

Another star player who will not be available is midfielder Jamie McGrath. The 22-year-old suffered a metatarsal injury in Waterford last week and was at last Friday’s game on crutches. Patrick McEleney missed nine weeks earlier in the season with a similar injury, but Perth revealed that McGrath’s is not as severe.

“It’s the same bone as Patrick McEleney, but it doesn’t require an operation,” Perth added. “It’s damaged, as opposed to Patrick who had a stress fracture - this is completely different. He will definitely miss the next two weeks, and then we will have a fair idea in about two weeks’ time (about a timeframe for a return).

“Again, it’s disappointing because Jamie was playing so well. He was in really good form and a real leader for us on the pitch. We’re being challenged this year and not everything has gone our way, but, at the same time, we are where we were last year.”

Dundalk now face Bohemians twice in just 11 days, with a trip to Cork sandwiched in between, in what is a crucial period for the club as they close in on the mid-season break. Despite being a tough nut, Bohs’ only win in the last 12 meetings of the teams was in a dead-rubber at the end of the 2017 season.